Popstar Ellie Goulding came to the aid of YouTuber Jack Joy from Car Throttle when his Volkswagen Golf was pushed sideways down a road in west London by a Royal Mail truck.

A video went viral on social media on Monday, December 16 of a black Volkswagen Golf being pushed down a road by a Royal Mail delivery wagon, with vehicles around it blaring the horns in an attempt to get the driver to stop pushing the car.

Goulding was traveling in a Range Rover beside the vehicles when the incident took place, getting out of her car to check on the driver of the Golf when they finally came to a stop, with the shocked Royal Mail employee yelling that he didn’t know the car was there, saying he “didn’t see him.”

With millions watching the clip on Twitter, it didn’t take long for some to recognize the man sitting in the driver’s seat of the Volkswagen Golf, identifying him as Jack Joy, who appears as part of the popular YouTube channel Car Throttle.

Joy’s involvement in the frightening crash was confirmed by fellow presenter Alex Kersten, who tweeted that it was indeed his co-host who had been involved in the collision.

“To everyone asking, yes, this is Jack from Car Throttle,” he wrote. “Jack minding his own business in the slow rain, the lorry driver failed to look properly when changing lanes, jack-knifing Jack’s GTi and pushing him 0.5 miles down the road. Jack is shaken but ok.”

To everyone asking, yes, this is Jack from Car Throttle.

Happened this morning. Jack minding his own business in the slow lane, lorry driver failed to look properly when changing lanes, jack-knifing Jack’s GTi and pushing him 0.5 miles down the road ?

Jack is shaken but ok. pic.twitter.com/5Ix6WFAB3e

Joy himself responded to concerned fans on Instagram, who asked the YouTuber if he was hurt following the crash, and on the state of his Volkswagen Golf which was shunted down the road. 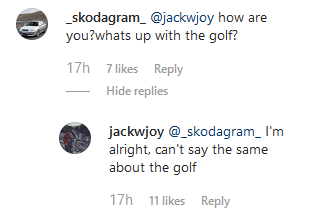 Joy stated he was fine, but couldn’t say the same for his Golf.

Ellie Goulding also commented on the incident on the social media platform, calling out other drivers who were in the area at the time: “I can’t believe the first instinct of other drivers was to instantly start filming on their phones, and shout abuse at the poor shocked driver, not even checking if the other driver was okay.” 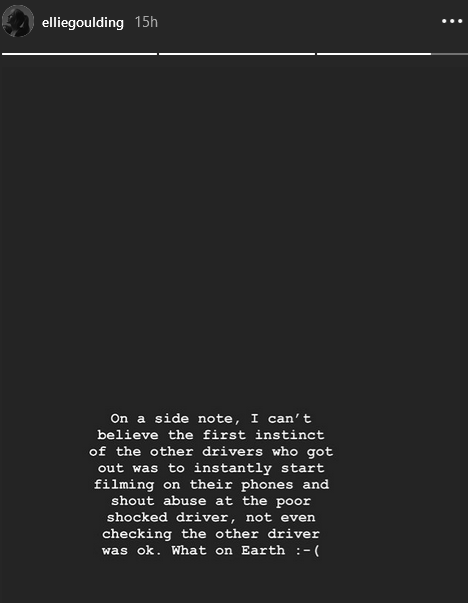 Goulding’s Instagram Story said she was shocked at the behavior of other drivers.

Incredibly, both men walked away from the incident unscathed, although Joy was visibly shaken in the clip, which was later confirmed by Kersten.

The Royal Mail have stated that they are “very concerned about this incident,” and will be investigating it as a matter of urgency.