Tyler ‘Ninja’ Blevins, his wife Jessica, and Twitch’s Alinity all got into a war of words on Twitter with Felix ‘xQc’ Lengyel over claims that streamers were paid to do charity streams, which turned into a heated argument full of personal attacks.

On June 29, xQc was broadcasting on Twitch when he claimed to reveal that “most charities” will pay streamers to do streams.

“I don’t need proof, that’s just common sense,” he said, in response to some doubting viewers. “A good amount of charities that your streamers do, they raise money, but they’re paid a flat amount before there’s any money. Even if they raise a less amount…”

The former Overwatch pro explained that he himself had been approached to host a sponsored charity event on his channel: “Holy sh*t! I get these offers, I would know!”

His comments soon went viral on Reddit, which then brought DrLupo into the conversation, after one user suggested that the money that he has raised for St. Judes over the years could be due to paid agreements.

“I’ve never been paid to raise money for St. Judes,” Lupo stated. “Just wanted to be sure that was clear.”

Ninja’s wife, Jessica Blevins, wasn’t so cordial in her reply, as she blasted xQc for “always having some trash to say” and that she had never heard of a streamer getting paid to raise money. .” 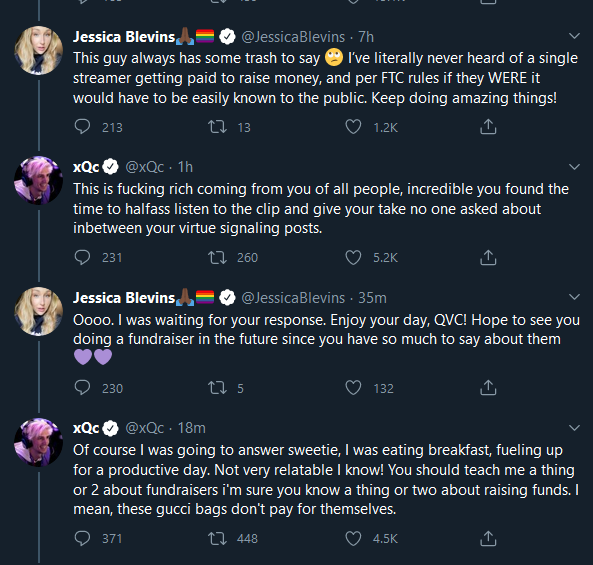 Things got personal after that, as xQc responded that the remarks were “rich” coming from her: “Incredible you found the time to half-ass listen to the clip and give your take no one asked about in between your virtue signaling posts.”

The back-and-forth only got more heated from there; the pair continued to throw jabs and insults at each other before Ninja himself stepped in to defend his wife from his fellow streamer’s insinuations that her “Gucci bags” are paid for by charity.

“You have zero clue the amount of work Jess does for our family and our business, and when she wants to buy a Gucci bag she f**king can because she worked for it,” he replied. “We have donated millions to charity, and raised hundreds of thousands of dollars. Stop being a piece of sh*t.” 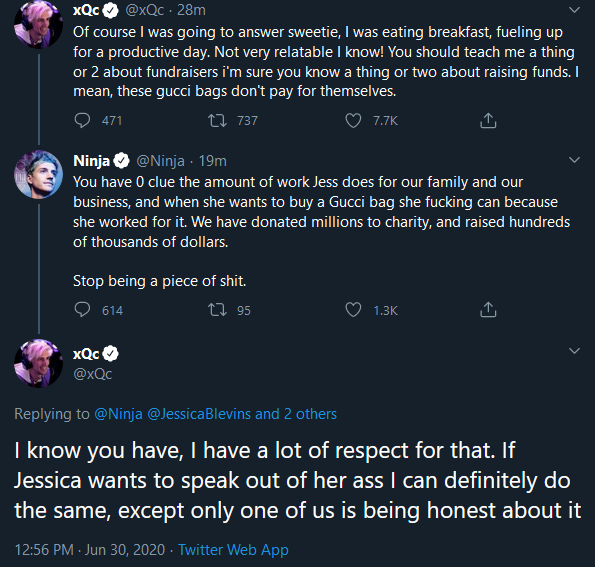 Despite his “respect” comment, Jessica wasn’t buying it, pushing things further into the fire by calling xQc “sexist” and accusing him “spewing trash.”

“It’s very clear that you don’t respect women or really anyone with the trash I’ve heard you spew,” she tweeted. “If you want to be sexist and act like because I’m married to a successful man, that it makes me a do-nothing mooching woman, that’s your choice to be that kind of person.”

Even after the star streamer hit back at her for using the “sexism card in such a trivial interaction,” Blevins reaffirmed her accusations that the comments made against her were because of her gender. However, she also said in a separate tweet that she’d personally messaged xQc so they could continue their discussion privately. 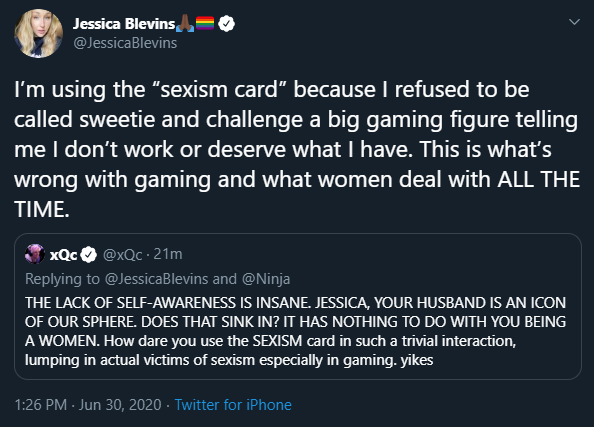 As if that fiery back-and-forth wasn’t enough drama, Twitch streamer Alinity got in on the action. After she said “Team Ninja” would lose in a reply to esports insider Rod ‘Slasher’ Breslau’s joking tweet, Ninja immediately hit back at her by bringing up the animal abuse allegations she faced last year.

Naturally, this led to the two having their own heated war of words on Twitter, one that resulted in Alinity calling the superstar streamer “the most toxic person in gaming. 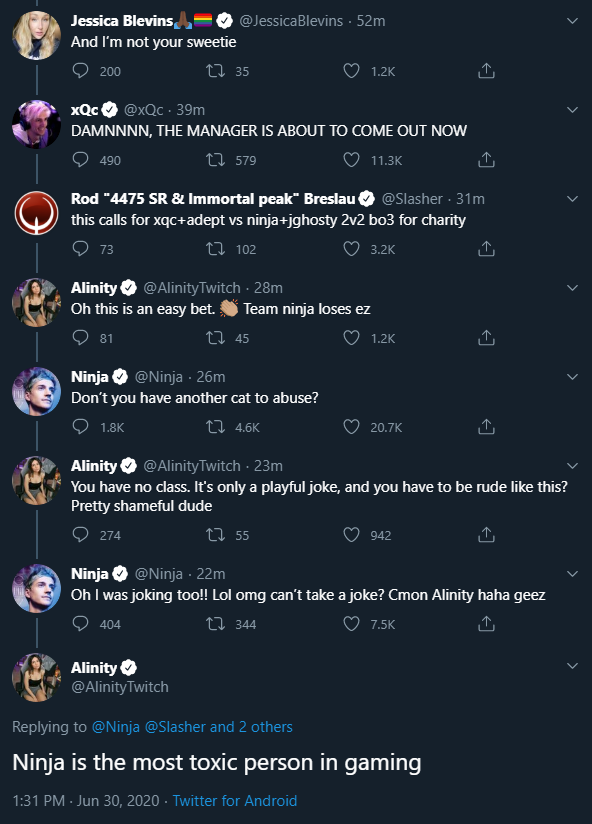 Remember, this all came in reply to DrLupo’s original reply to xQc’s charity claims, and for what it’s worth, the two seem to have remained on good terms despite all of the arguing and personal attacks that surrounded the topic.

Even the former Overwatch pro admitted that things had gotten out of control and that some of his comments were taken out of context, but his counterpart didn’t seem to be as furious about the whole ordeal.