Small Twitch streamer “Specularstone00 “let his mother take over his broadcast for a few moments on December 16, and she had some heartwarming comments directed towards her son’s viewers.

During the stream, Specularstone00 (also known as Spec) was coming home after being outside for a bit, and asked his mother to “say random things on the internet” while he used the washroom.

“Just say random things, like real quick for a couple of minutes,” Spec requested. “Say something funny. You have like five or six people listening to you.”

“I don’t want to talk right now,” his mother confessed as her son disappeared down the hall. “Besides, I can’t hear anybody.”

Despite not wanting to talk to the stream, Spec’s mother eventually cracked and had some very wholesome things to say to her son’s chat.

“All I can say is, thanks to whoever is talking to my son,” she admitted. “That’s the only time I hear him laugh – when you guys are around. And that’s sad. But whatever makes my son happy, I guess I got to go with it.”

“That’s so sweet,” viewers in the chat replied as Spec’s mom thanked them.

Eventually, Specularstone00 came out of the bathroom and asked his mom if she said anything. “I thanked them for making you happy. Making you laugh,” she replied.

“I mean, I make them laugh too,” he joked, but was very supportive of his mother’s kind words directed to his fans. “Thank you, mom. Appreciate that.” 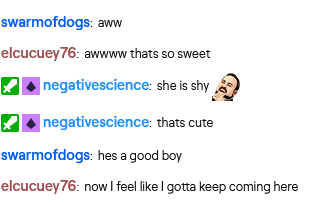 Spec’s mother warmed the hearts of his viewers.

Climbing on Twitch can be a tough grind, but clearly Spec has his mother in his corner. Breaking out as a small streamer can be a nightmare, and Spec is slowly but surely growing his channel into something larger.

As of this posting, he has 476 followers. Hopefully he can make it to 500 or more to end 2019 and can continue his climb in the new year.