Trisha Paytas hits out at H3H3 for “ruining” her relationship

YouTuber Trisha Paytas hit out at H3H3’s Ethan Klein on Twitter after claiming he ruined her relationship with his brother-in-law. The personality went off on the podcast host in a Twitter tirade.

H3H3’s relationship with Paytas has been a tumultuous one, after Ethan Klein featured her in a video in May 2019 where he called out influencers using Photoshop to touch up their bodies.

They mended bridges earlier in 2020, though, after she was invited on the H3 podcast and was slotted to be the contestant on their Bachelorette segment. However, things quickly fell apart amid dating drama.

The whole thing kicked off at the end of March when Paytas uploaded an image to Instagram of her and Hila Klein’s brother Moses together.  Ethan and his wife seemed blindsided by their supposed relationship.

However, on April 13 Paytas posted a series of now deleted Tweets aimed at Ethan Klein, in which she called him the “f**king worst and accused them of “abandoning Moses” and ruining their relationship.

On April 13, Trisha Paytas unloaded on h3h3 for ruining her relationship.

Ethan quickly fired back, stating, “Do you really think you need any help f**king up relationships?” He then mocked her video on the situation as being too long. 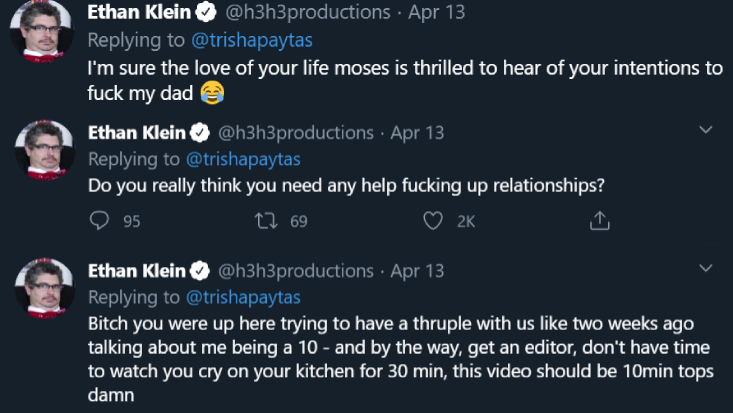 Klein was referring to her YouTube video which she uploaded the same day. In the clip, she emotionally explained that she was “heartbroken” and was told she had been dumped on the H3 podcast. “I found out it’s over through the podcast. They say Moses texted them “it’s over,” she said.

Paytas then hit out at Ethan and Hila. “From podcast one, they’ve been really mean to me. Ethan and Hila. Ethan was like I disavow this. Said he would do anything to sabotage our relationship. Hila said me tweeting about her brother’s s** life felt a direct attack. Hila was like “she’s never allowed over at my house!” she continued.

It remains to be seen if Ethan addresses the situation on the podcast, as there hasn’t been an episode since April 10. Although it wouldn’t be too surprising if the Kleins tackled it given the drama swirling around it.

Trisha Paytas took down the tweets almost immediately, but has still left up her YouTube video. However this gets resolved, this is another example of how dating can get messy fast when it involves family.