YouTube king Felix ‘PewDiePie’ Kjellberg came under fire for promoting an anti-Semitic YouTube channel in a video on December 9. In response to the media’s coverage of the scandal, hackers took matters into their own hands, publishing a fake apology letter on the Wall Street Journal’s website in response to their 2017 article on the YouTuber.

While the WSJ’s previous piece covered a scandal from early 2017, where PewDiePie garnered massive backlash for making an anti-Semitic joke in an attempt to test the limits of freelance site ‘Fiverr,’ his latest debacle has unleashed further criticism, prompting hackers to infiltrate the news site to hit back at the media.

PewDiePie addressed the hackers’ efforts in an episode of ‘Pew News’ on December 20, where he made a few scalding comments toward the WSJ and their staff.

Upon reading the faux apology aloud (which claimed that a few of the WSJ reporters had been fired), PewDiePie put their writers on blast, calling them “hypocrites” due to a few of their Tweets he’d found online and deemed questionable.

“That’s nice,” Pewds commented. “They finally realized that their own reporters are complete hypocrites, and they’ve said things that are irrefutably anti-Semitic.”

Pewds went on to congratulate the hackers for their massive stunt and called out the WSJ for promoting sponsored articles through their advertising group ‘the WSJ Custom Solutions Team,’ where the fake apology had reportedly been posted. 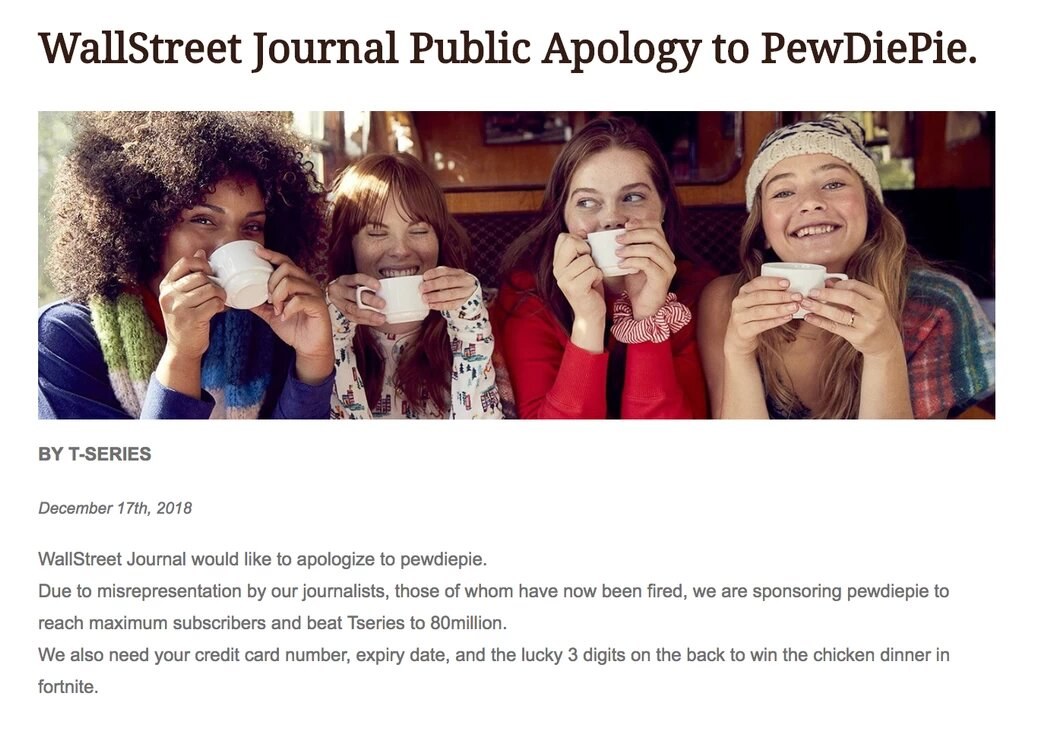 “Wall Street Journal would like to apologize to PewDiePie,” the hackers’ statement read. “Due to misrepresentation by our journalists, those of whom have now been fired, we are sponsoring pewdiepie to reach maximum subscribers and beat Tseries to 80 million.”

The WSJ has since deleted the ‘apology,’ publishing a response statement that clarified their lack of involvement in the scandal.