Logan Paul has request for Justin Bieber ahead of KSI fight

YouTube stars Logan Paul and KSI are set to throw down in the net’s most buzzed-about boxing rematch on November 9 – and even major celebrities are getting involved in their longtime rivalry.

Canadian pop star Justin Bieber weighed in on the KSI vs Logan Paul beef in an Instagram comment on September 20, where he gave pointed instructions to Paul ahead of his upcoming bout.

“Rip his head off,” the singer wrote – a brutal message that saw both YouTubers react in a big way. 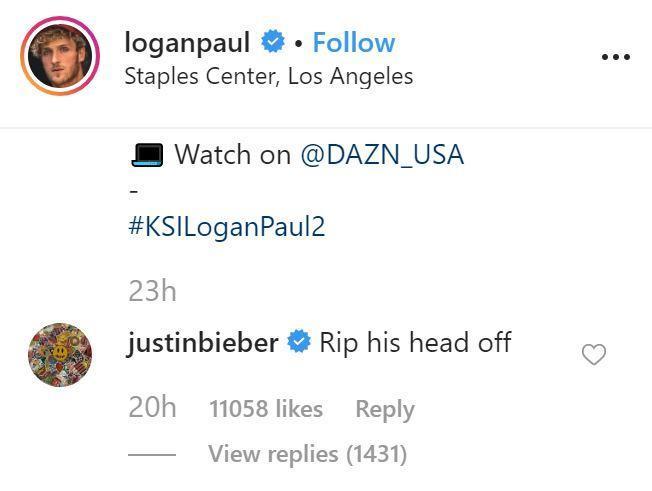 TMZ Sports caught up with Paul during a night of partying on October 2, where they asked the YouTuber about Bieber’s recent social media comment.

Understandably, the Maverick mogul seemed pumped at Bieber’s recognition – and even hopes that the star will be sitting ringside during his rematch.

“Listen, we all know Bieber’s the GOAT,” Paul replied. “And he’s smart. He’s rooting for me in this fight. If he wants me to tear KSI’s head off, Imma fuckin’ do it! …you know I love you, Biebs. I wanna see you at the fight!”

He isn’t the only one hoping that Bieber will make an appearance at the bout, either: KSI held a similar sentiment toward the singer, hoping that he’ll be able to banter words with him, should he make good on his promise to defeat Logan with a knockout.

“…if anything, it’s gonna be more funny when I knock out Logan,” KSI said during a prior interview with TMZ Sports. “I hope Justin Bieber is gonna be ringside, so after I knock out Logan, I can go up to him and be like, ‘So whose head was gonna get ripped off?’”

As it stands now, the KSI vs Logan Paul rematch is looking to be a star-studded affair, with an all-pro undercard featuring the likes of undefeated super middleweight champion of the world Billy Joe Saunders.

With a little over a month until their November 9 rematch, fans and critics alike are gearing up for the fight that will end one of YouTube’s biggest feuds to date – and so is Justin Bieber, apparently.