YouTube star Jake Paul and Drama Alert host Daniel ‘KEEMSTAR’ Keem set Twitter ablaze with a heated back and forth on January 15.

KEEMSTAR is no stranger to controversy on social media as his YouTube channel is dedicated to all things drama and never shies away from conflict.

It seems like he wasn’t at all prepared for the latest batch of controversy, however, after he Tweeted a picture of Jake Paul’s ex-girlfriend Erika Costell with the caption “Eugenia Cooney 2019” that seemingly rubbed Paul the wrong way.

Hours after KEEMSTAR posted the photo, Paul replied with a heated response in which he calls out KEEMSTAR for body shaming Costell and calls him a “piece of trash.”

keem you’re a piece of trash.

this girl is drop dead gorgeous regardless if we’re together or not..

you deserve to be dragged for this..

dear internet, why tf do you allow this, but then turn into ruthless animals when I put a blindfold on? https://t.co/2dEmO5zdLP

Eugenia Cooney is another YouTuber who is known for being incredibly thin, reportedly weighing well under 100 pounds.

Paul seemingly believed KEEMSTAR’s Tweet to be poking fun at the fact that Costell looks skinny in the chosen picture, leading to the above Tweet as well as a number of follow-up Tweets. 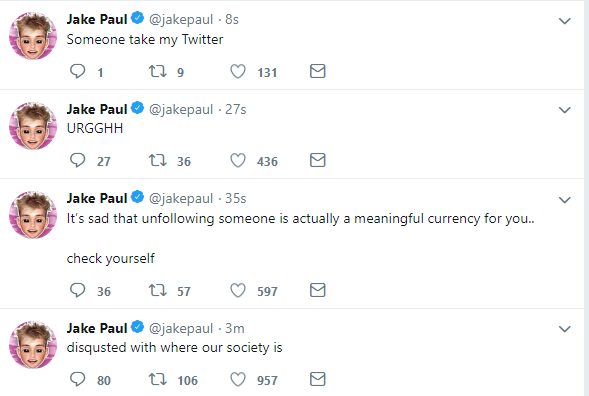 Not content to let Paul have the last word, KEEMSTAR responded by asking whether Paul thought there was something wrong with how Cooney looks.

Body Shamming ? Are you saying there’s is something wrong with Eugena Cooney?

Paul offered no response to KEEMSTAR’s final word on the matter, seemingly opting to move on from the ordeal completely.

To her credit, Costell seemed to take the entire incident in stride, responding to KEEMSTAR’s initial Tweet in jest.

While this spat looks to be over, for now, Paul will likely turn right back to his ongoing rivalry with fellow YouTuber Bryan ‘RiceGum’ Le.

The pair most recently traded shots back and forth over the weekend during a charity basketball event hosted by the ACE Family, who are no stranger to controversy themselves.