Twitch superstar Turner ‘Tfue‘ Tenney nearly revealed too much of himself after appearing on his online celebrity ex-girlfriend Corinna Kopf’s stream without clothes.

After having publicly ended their relationship back in early July, Tfue and Corinna have seemingly agreed to become what is commonly known as friends with benefits.

While they haven’t come out and said that they’re back together, neither is trying to hide the fact that they’re still seeing each other, or pretending otherwise.

Case in point – on August 23, while Corinna was streaming live on Twitch, the Fortnite icon came into view of her facecam, and he didn’t look like he had any clothes on.

In fact, the only thing standing between him and total birthday suit was a giant pillow covering his private areas, oh and the Instagram star draped all over his shoulders. 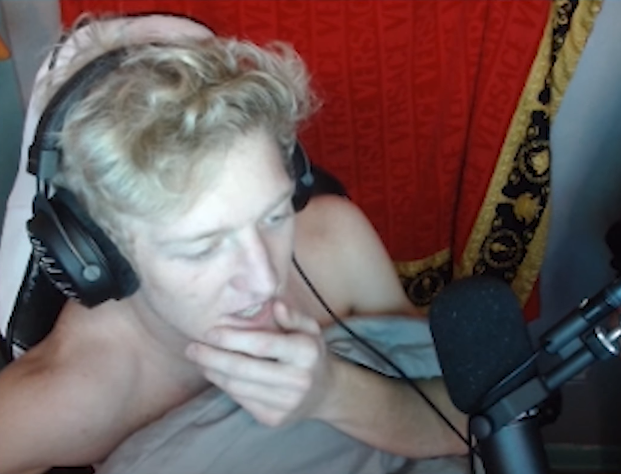 Now, most seeing this would probably be wondering what set of developments led to a half-nude Tfue appearing on his ex-girlfriend’s livestream.

While streaming, Corinna was having some audio issues, so she ended up switching over to Tfue’s station for better quality, but there was still work that needed to be done.

Who better to help with these issues than one of the biggest streamers in the world, who slid into view with an incredibly sheepish green and helped saved the day.

For anyone who was unsure about whether Tfue and Corinna were still seeing each other, this intimate sequence live on her stream should definitely put those doubts to bed.

While he was fixing her audio issues, she was draped all over his body, and at one point even playfully threatened to rip away the pillow to “display” what he was hiding behind it.

And even when he stood up to go to bed, she started tickling and touching him intimately, as he ran away giggling “Ah, don’t touch that!”

Let’s face it, whether they want to admit it or not, the power couple are back together and everything seems so right about it.