Paul and Costell dated throughout most of 2018 before calling it quits back in November, with Paul describing the split as “heartbreaking.”

Despite seemingly changing his tune in the weeks following the breakup by saying it was a “toxic relationship,” Paul has since made it clear that he’s not over Costell, even attempting to get in touch with her on New Year’s Eve.

All of Paul’s attempts at reconciliation clearly paid off given the pair were spotted together at Super Bowl on February 3.

Damn @erikacostell & @jakepaul back together too? Both at Super Bowl! pic.twitter.com/tMvB4aT5CY

Drama Alert host Daniel ‘KEEMSTAR’ Keem was the first to bring up the supposed reunion, posting the above picture on Twitter.

While neither Paul nor Costell initially had any sort of response to the picture, Costell has since opened up in the form of a comment on Instagram.

Replying to YouTuber Anthony Trujillo, Costell says “we look so good here,” prompting many to see it as a positive sign in her relationship with Paul. 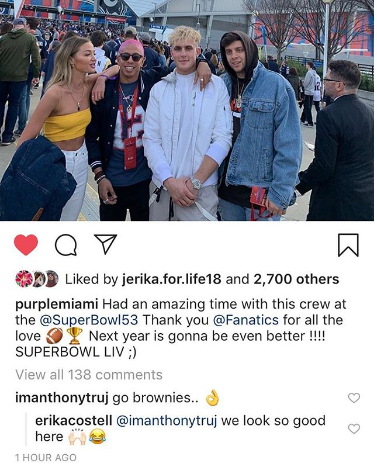 Could Erika Costell and Jake Paul be getting back together soon after this photo surfaced?
[ad name=”article4″]

Paul has still refrained from commenting on the meetup at the Mercedes-Benz Stadium in Atlanta, seemingly focused on his escalating beef with Soulja Boy.

Soulja Boy and Paul have been taking shots at each other for the last week and following a heated Instagram Live discussion on February 3, the pair have seemingly set up plans for a boxing match at some point in the future.

Nerdle game answers: What is today’s Nerdle of the day? (June 24)