Dr DisRespect has reassured fans after the shooting incident that forced him to shut down his stream on September 11, confirming that nobody was hurt and stating that he will return to streaming as normal.

“The Doc and family appreciate everyone’s concerns and well wishes”, the Twitch star said. “Thankfully no one was hurt. The situation is being handled appropriately.”

He went on to confirm that his daily streams will resume “according to schedule” on September 12. 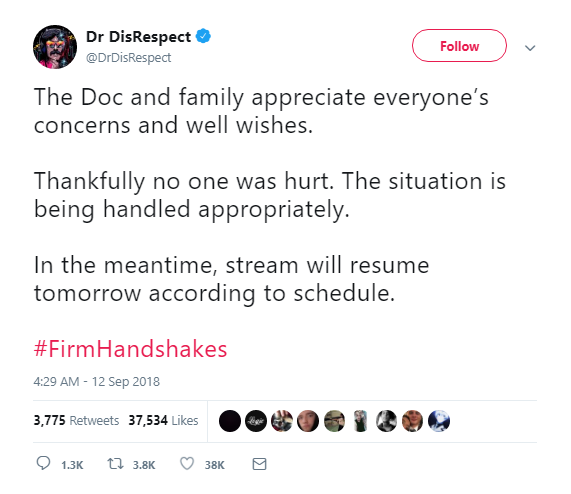 The Doc, whose real name is Guy Beahm, was forced to end his stream prematurely last night after a bullet was shot at his house, breaking an upstairs window.

The entertainer was in the middle of a Call of Duty: Blackout stream when something out-of-shot caught his attention, causing him to get up and investigate.

When he returned to the shot he was no longer wearing his “Dr DisRespect” guise and told viewers that he had to end the stream because “someone shot at our house”.

He went on to explain that this was the second time that the house had been shot at in the space of two days before hastily shutting down his stream for the night.

The news that nobody was harmed will come as a welcome relief to friends and fans of Beahm, and he is sure to see a massive amount of support when he next switches his stream on.

As one of the most popular streamers on Twitch, Dr DisRespect has been the victim of everything from “stream sniping” to “swatting” in the past, but this latest incident came as a shock to everyone.

Presumably the situation is now in the hands of the relevant authorities.