Smooya under fire after telling OpTic CS:GO player Refrezh to “kill himself”

British CS:GO pro Owen ‘Smooya’ Butterfield has caused a stir in the community after admitting that he told OpTic player Ismail ‘Refrezh’ Ali to “kill himself” over a FACEIT Pro League match.

Update, February 6, 11:43am EST: Sources have told Dexerto that Smooya is to be banned from FaceIt Pro League indefinetly following the incident with Refrezh.

Smooya, who has recently joined Denial on a temporary basis, was apparently angered after Refrezh “threw” in the FPL match, posting a series of now deleted Tweets.

He claims that Refrezh was not speaking for numerous rounds, and even suggests he was deliberately allowing himself to be killed by the enemy team, running blindly through smoke grenades. 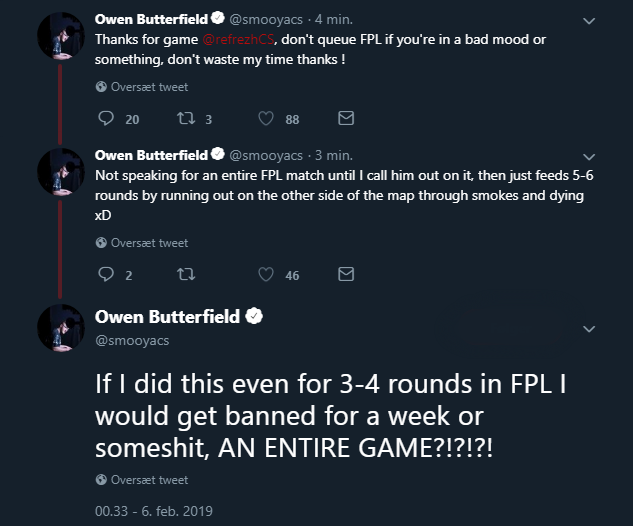 After the match, smooya was heard talking about the incident on Lobanjica’s Twitch stream, a popular Counter-Strike streamer.

“You have no idea how bad this guy [refrezh] just threw, I had to call him a bitch and shit for him to start trying,” Smooya exclaims, “It went to overtime and he just stopped trying and I literally told him to fucking kill himself.”

The clip was shared to Reddit and social media, where fans called smooya’s comments “unacceptable”. There were also some who believe this could impact his career negatively, but others argue it is being blown out of proportion, and an apology should be the end of the situation.

Although smooya has not necessarily apologized publicly, it appears he has done so privately, deleting his previous posts and stating on Twitter that he and Refrezh have made up.

Smooya is currently benched from BIG Clan’s roster and stood in for Denial at the IEM Sydney Open Qualifier, but the team failed to secure one of the two spots available at the closed qualifier.