If you’re looking to spend your December days in tears, then Fullmetal Alchemist’s Nina Tucker will surely do that for you – especially with this tearjerker of a cosplay.

You don’t even have to be a Fullmetal Alchemist fan or ever watched it to know that something terrible happens involving a little girl and a dog – it’s absolutely everywhere online.

Any time somebody so much as mentions it, you always see comments like “too soon bro” and “why?”, but one cosplayer has taken it to the next level. 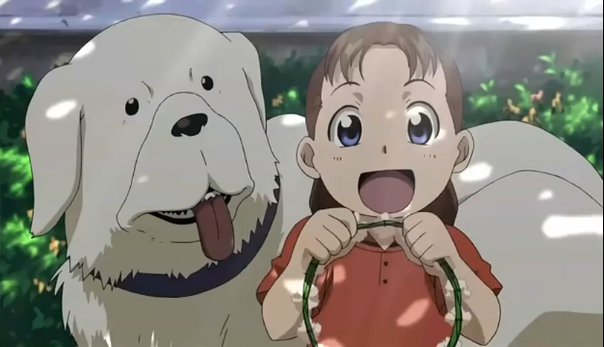 Nina and Alexander are the bestest of friends and truly inseparable.

As Colonel Roy Mustang would say, it’s a terrible day for rain. And this take on Nina Tucker and her pet dog is sure to bring a tear to the eye.

Cosplay artist Bunny D. Sumi decided to bring the loveable five-year-old from the show to life, along with her trusty canine Alexander.

If you don’t know the backstory, then the costume looks like an innocent girl with her best friend, but viewers of Episode 6 of Fullmetal Alchemist and Episode 4 of Brotherhood will know why it’s so heartbreaking – if you plan on watching it, bring tissues.

Bunny perfectly captures the child’s innocent spirit with her cosplay, and even uses her own Great Pyrenees dog named Chamois to showcase the “inseparable” bond between the character and her pooch.

Nina is the daughter of Shou Tucker, a State Alchemist known for his Sewing-Life skills. The episode centres around main protagonists Ed and Alphonse Elric’s visit to his home.

There, they meet the young girl and become close with her as they play together and learn about how she’s lonely as her mother left two years ago.

Bunny is a self-proclaimed “newbie” at cosplaying, but that doesn’t stop her from breaking the hearts of Fullmetal Alchemist fans across the internet.

While her dog Chamois stars in this cosplay, she’s a true animal lover as she’s also used other pets such as her chinchilla to create some true-to-life outfits.