Controversy struck bright and early in day two of the Call of Duty League’s Florida Home Series, as the CDL decided to count the result of the London Royal Ravens’ match against Atlanta FaZe despite it having started without Matthew ‘Skrapz’ Marshall being present.

Every day two match at a CDL tournament is always important; teams are either playing for a spot in the semifinals or to survive elimination. It was the latter for both Royal Raven and FaZe, who met in the first match of the day on May 9 to decide which of them will be the first to stamp their ticket to the playoff bracket.

Right before their match started, however, a glance at the player cameras revealed that Skrapz was not at his station, and he didn’t make it back in time before the first map loaded up.

As the Hackney Yard Hardpoint kicked off, the London players quickly began appealing for a restart by killing each other in spawn, and it appeared that Atlanta were also ready for that eventuality, with even the casters sounding like they were on board.

But that official word turned out to be ‘play on,’ and by the time that the Royal Ravens realized they weren’t being granted another chance at the map, their feeble attempt at a comeback fell well short, as the game ended 250-104 in FaZe’s favor.

Almost instantly after the result came through, Skrapz went on Twitter to explain what happened, revealing that it was all the result of a bizarre mixup with the CDL admins.

“League is an absolute joke, got told broadcast will be between five and 10 minutes,” he wrote. “You’re only allowed the black Mountain Dew water bottle on stream, and me being the good person I am, I emptied my water and filled up that bottle.”

“Ref asked are we ready to go, I didn’t reply. Whole team asked him 15 times when it started to restart because I wasn’t there: ‘no you got to play.’ Was trying to help out ‘us’ the ‘CDL’ by only advertising what they asked us to use.” 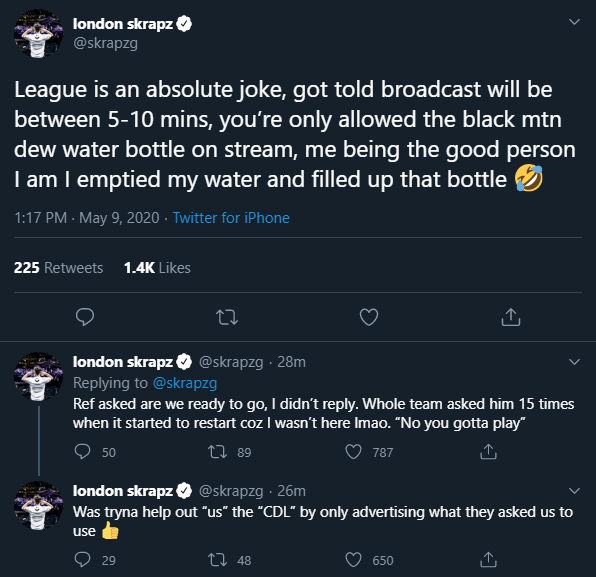 Facing a powerhouse team like Atlanta FaZe is already hard enough, but after going down 1-0 in such a manner, the odds were simply too much for London to overcome.

They did make a series of it, however, tying things up with a convincing 6-1 win on Arklov Peak Search & Destroy. But Atlanta flexed their respawn prowess with wins on Hackney Yard Domination (155-145) and Gun Runner Hardpoint (250-130) to seal the series victory.

The official Royal Ravens Twitter account also got in on the action during the match, making their feelings about the decision known with a cheeky tweet.

You can watch these matches live and keep up with all of the Call of Duty action via our CDL Florida hub, which includes streams, updated scores, brackets, and more.