The Call of Duty League’s Florida Home Series kicked off on May 8 with four intense matches, setting the stage for what should be an exciting final two days of competition.

The first day at a CDL event can be a tricky affair; while teams go in knowing they can’t get eliminated, how they play in their lone match of the day determines the type of pressure they’ll face the rest of the way.

Atlanta FaZe, who came into CDL Florida as heavy favorites, won their first-round match, putting them just one more win away from yet another semifinal appearance. The same could not be said for hosts Florida Mutineers, however, who got spanked by Minnesota ROKKR 3-0 and fell to the Losers Bracket at their own Home Series.

Following their addition of Mack into the starting lineup, Subliners looked massively improved at CDL Chicago. However, they didn’t experience similar success in their first round matchup versus Ultra, who looked very strong despite coming in with just two wins on the season.

The Dom was definitely too close for comfort; the score was still tied with as little as six seconds left, but the northerners pulled off the last-second win to seal the series.

A close two-point Domination win gives @TorontoUltra the series advantage over the @Subliners!

The most highly-anticipated powerhouse matchup of the day turned out to also be the most one-sided, as ROKKR dealt Mutineers a dominant 3-0 blow that sent the hosts down to the Losers Bracket.

The warning signs were there from the beginning as Minnesota took the Ramazza Hardpoint 250-210 followed by a 6-2 win on St Petrograd S&D, taking a commanding 2-0 lead.

Florida looked like they were going to try and mount a comeback but the Hackney Yard Domination slipped through their fingers at the last moment, ultimately going the way of their opponents 162-154.

Minnesota @ROKKR take the wind out of Florida @Mutineers’ sails with the 3-0 sweep!#RØKKR | #CDL2020 pic.twitter.com/XJ2kroP5X0

Coming off of a rare loss in the semifinals of CDL Chicago, FaZe looked to regain in their first-round matchup against Legion, which they did in 3-1 fashion.

Despite the scoreline, however, the series was far from one-sided, as the first three maps were very close; Atlanta took the first two maps – 250-212 on Azhir Cave Hardpoint and 6-5 on St. Petrograd SnD – before Paris clawed back with a tight 148-145 win on Gun Runner Domination.

However, the European side couldn’t keep up on St Petrograd Hardpoint, falling 250-117 to their North American counterparts. This victory means that FaZe have yet to lose a group play match this season.

With both Royal Ravens and OpTic Gaming coming off 0-2 duds at CDL Chicago, something had to give in their first-round matchup, which came just days after OGLA decided to drop JKap from the starting lineup in favor of Chino.

Seany, Royal Ravens’ newest addition after Rated was dropped, pulled off a tough 1v2 clutch in round 10 of the game five S&D on Piccadilly, a fitting way to end what was a thrilling, back-and-forth match.

For the Green Wall, it was another disappointing result – their fourth loss in a row dating back to CDL LA. They’ll look to survive elimination tomorrow when they take on Paris Legion in the Losers Bracket.

Elimination will come into play on day two of the Florida Home Series as four of the eight teams will find themselves on the outside looking in once the dust settles.

Group A will be decided between Toronto Ultra and Minnesota ROKKR, while New York Subliners and hosts Florida Mutineers will both kick off their Losers Bracket runs against each other.

On the other side of the bracket, Atlanta FaZe and London Royal Ravens will battle in the Group B final, with the loser having to face the winner of Paris Legion vs OpTic Gaming LA in the Losers Bracket. 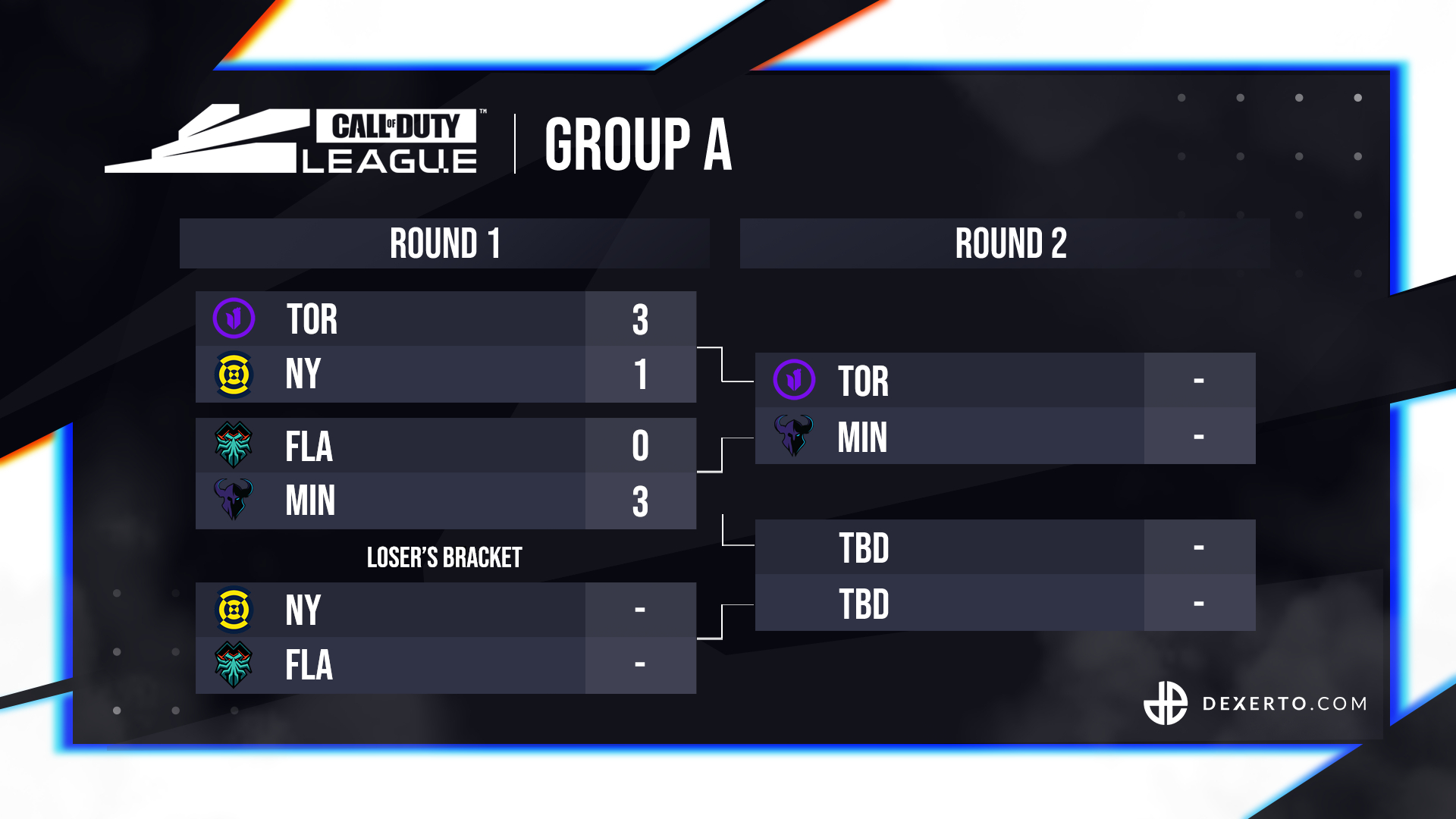 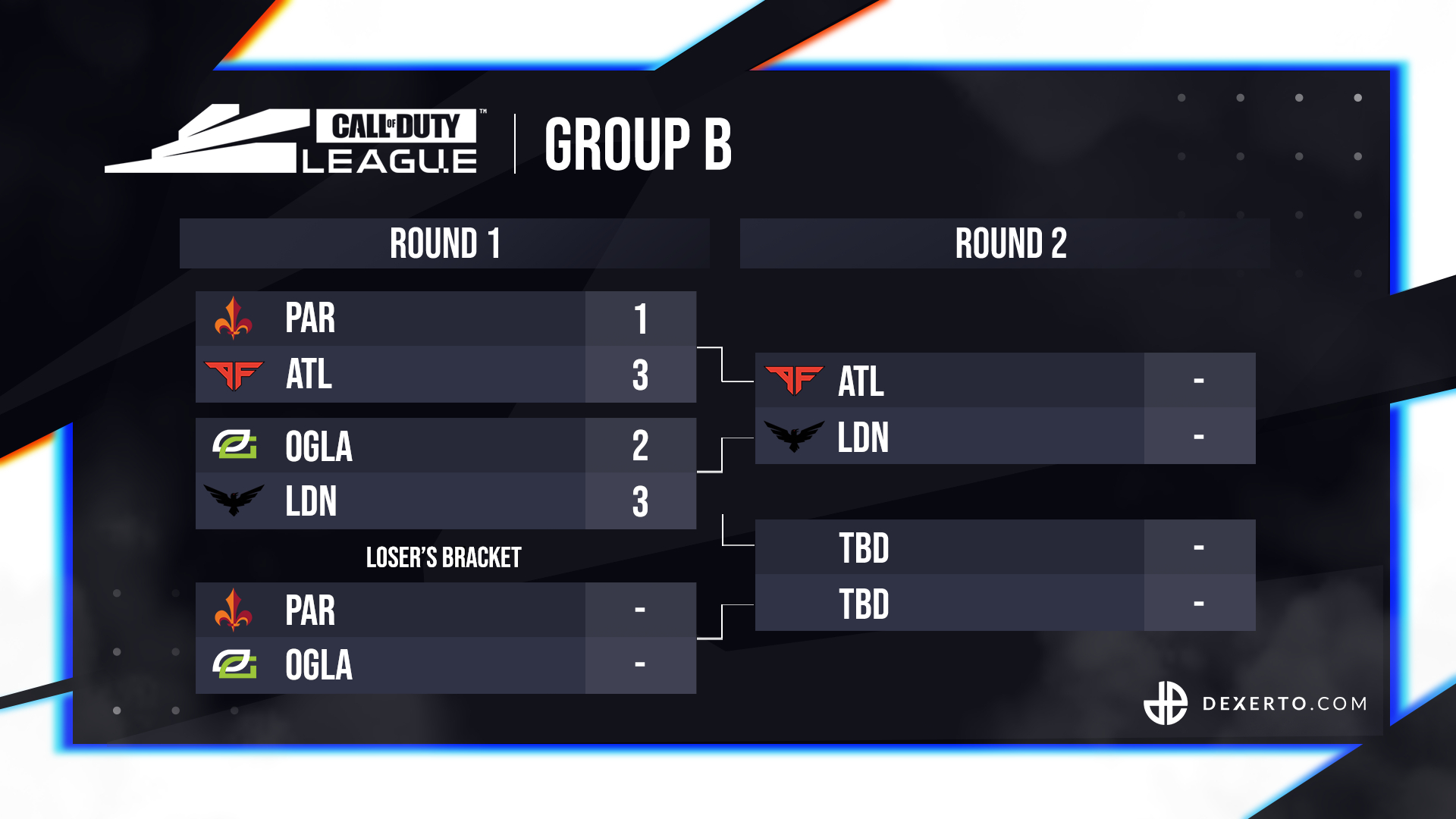 Remember, you can watch these matches live and keep up with all of the Call of Duty action via our CDL Florida hub, which includes streams, updated scores, brackets, and more.