Nadeshot’s 100 Thieves esports organization is making its triumphant return to Call of Duty for the Black Ops 4 season.

Their newest member, Sam ‘Octane’ Larew wasted no time in getting excited for the upcoming season, immediately DMing his new boss Nadeshot. 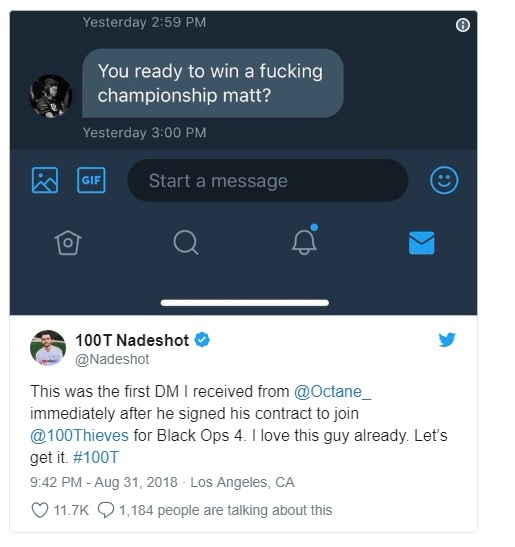 You ready to win a fuckin championship matt?

Octane has established himself as one of the best ARs in Call of Duty with consistent top placings the past few years, winning CWL Anaheim in Advanced Warfare and CWL Birmingham in WW2.

He left Luminosity to join the reworked OpTic Gaming squad that failed to make it out of the group stage at Champs, despite only losing a single match – to the eventual World Champs EG.

Nadeshot is no stranger to the podium himself, winning numerous titles as a player for OpTic Gaming.

He started the 100 Thieves organization after retiring as a player, but their first run in CoD esports failed to live up to the legacy of their owner. 100T placed t20 at Anaheim in Black Ops 3 and 12th place in the Stage 2 Playoffs before leaving CoD entirely.

The org sat out the Infinite Warfare and WW2 seasons to focus on other areas of esports, including a League of Legends team in partnership with the Cleveland Cavaliers.

100 Thieves returns for BO4 with a roster that expects to win titles as the aforementioned Octane is being joined by superstars Kenny and Fero.

The fourth player has not been announced, but that has not stopped the rumors of former OpTic great Damon ‘Karma’ Barlow joining on.