The stunning transfer of CoD pro player Sam ‘Octane’ Larew from OpTic Gaming to 100 Thieves has become the talk of the town in the competitive CoD community, as was expected.

In their discussions about the roster move and its implications for both teams, many have questioned why Octane would leave arguably the greatest organization in CoD esports history for an org whose only experience in the scene was a brief and unsuccessful stint in 2016.

Seeing all of the social media chatter, the player has publicly revealed that the reason he left OpTic was because he had no choice and that the decision whether to stay or not was made for him.

Getting a lot of tweets and people seem to be confused- I didn’t leave OpTic by choice.

When a follower commented on the post to point out that his contract was likely bought out by 100 Thieves, Octane made a point to clarify that he had been dropped by his former org.

Contract was likely bought out, for those of you wondering.

After I was dropped on my neck, yeah it was.

Optic have not confirmed or denied this claim as they have not yet said anything about the details of Octane’s move to 100T, and they will likely not reveal anything in the near future.

However, the player, the org seem to be going their own ways in good standing with each other, as both tweeted out their farewells and wished each other good luck in the future. 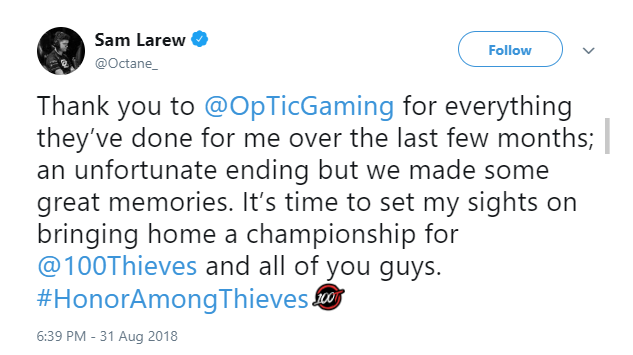 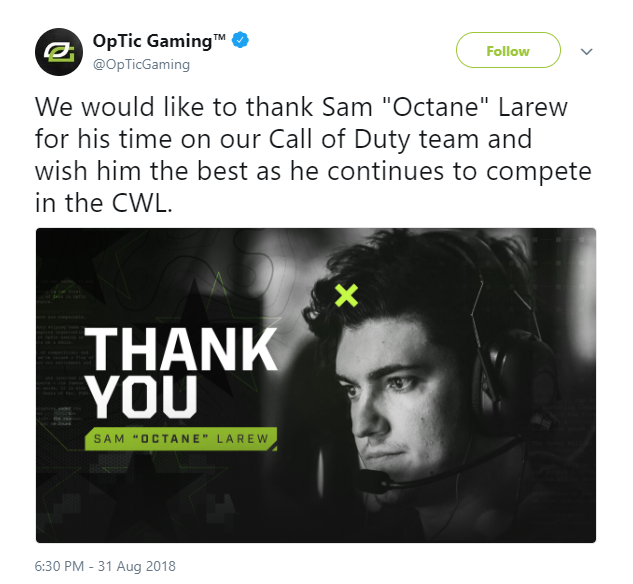 It appears that OpTic’s poor results in all three major tournaments since Octane’s arrival was enough for the org to decide to drop him, despite the fact that he had only arrived in May.

Now that Octane’s future team has already been revealed, all eyes will be on OpTic as in their search for a new fourth player ahead of the Black Ops 4 season.