Twitch superstar Nick ‘NICKMERCS’ Kolcheff is hosting a massive $50,000 Call of Duty: Warzone tournament called the MFAM Gauntlet, and we’ve got streams, the leaderboard, teams, and everything else you need to keep up with all the action.

Since his transition from Fortnite to Warzone, NICKMERCS has been one of the most-watched Call of Duty streamers on Twitch, and now he’s using that platform to put together one of the biggest tournaments we’ve seen for CoD’s new battle royale title.

Sponsored by the Army National Guard, HyperX, and SCUF Gaming, this $50,000 MFAM Gauntlet features not only some of the biggest content creators in gaming, but also several CoD pros, professional athletes, and even celebrities. Kyle Van Noy, an NFL player for the Miami Dolphins, is one of several pro athletes competing in NICKMERCS’ MFAM Gauntlet Warzone event.

When is the MFAM Gauntlet Warzone tourney?

This competition will take place on Tuesday, April 28, kicking off at 1 PM PT / 4 PM ET and scheduled to last for four hours.

It will be livestreamed on its own separate Twitch, which we’ve included below, and casters will include the Call of Duty League’s Clint ‘Maven’ Evans and Joe ‘MerK’ DeLuca.

Some of the participants are also broadcasting their POVs on their own individual channels, some of which we’ve also included below.

The standings for this event can be found on the MFAM Gauntlet website and are being updated live throughout the day as results come in.

There are 24 teams in total competing in the MFAM Gauntlet main event, each composed of three players since the tournament is being played in Warzone’s Trios playlist.

Nick himself is competing with Cloakzy and fellow FaZe Clan streamer Swagg and there’s a spot reserved for the trio of his subscribers who made it out of the first three weeks of qualifiers, which also doubled as sub tournaments.

The MFAM Gauntlet features a race-against-the-clock format as teams have exactly four hours to try and get as many quality matches of Warzone as they can. Once the time limit is up, each team’s best five matches determine where they finish on the final leaderboard.

Matches are scored based on two factors – eliminations and placement; here is the full scoring system that’s being used: 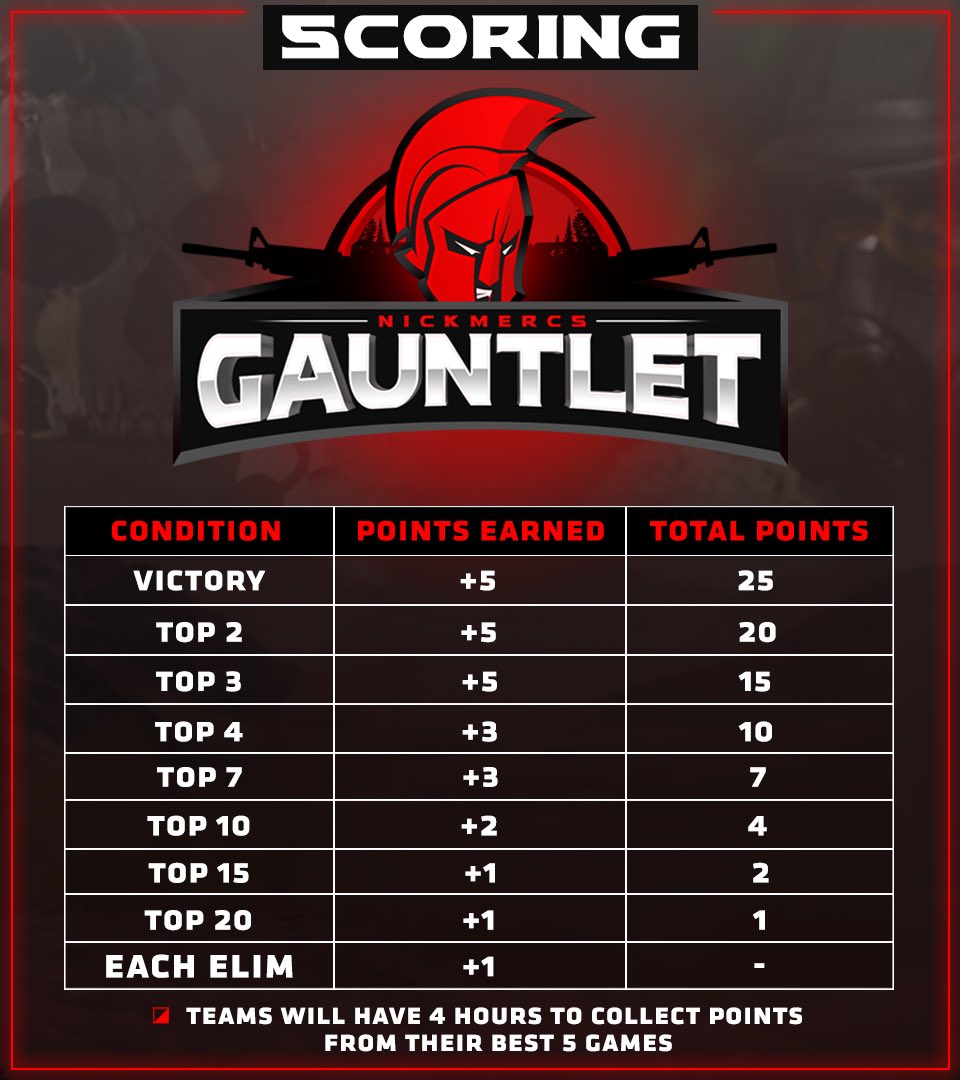 The $50,000 prize pool will be split accordingly between the teams that finish in the top-10, with an additional $1,000 each going to the player and team that finish with the most eliminations in their five best matches.