The release of Call of Duty: Black Ops Cold War is fast approaching, and we’ve got all the information available so far about pre-downloading the game on PlayStation 4, Xbox One, PC, and next-gen consoles.

The Call of Duty community is gearing up for the annual tradition that is the release of a new title, as players from around the world are revving up their consoles and PCs to try out the stories series’ 2020 installment.

Those who have played Modern Warfare will already be familiar with how inflated the file sizes of CoD games and updates have become, and Black Ops Cold War is no exception. Thus, Activision will be allowing users who pre-ordered digital copies of the game to download it early, so to have it ready to go when the November 13 launch day rolls around.

Below, we’ve got everything there is to know so far about this process and the preloading schedule. We will continue to update this page as more details become available.

Treyarch have announced that pre-loading on the PS4 will be available starting on Thursday, November 5 at 9:00 PM PT, which puts the rest of the times during November 6.

It’s also been confirmed that the entire game will take 95GB of space on the PS4 (not counting post-launch DLC content) but as with Modern Warfare, console players will have a way to delete game modes in order to save space, like the campaign and Zombies.

As for the PS5, since it’s releasing on November 12, players can start downloading BOCW as soon as their console is ready to go. The full game will take up 133GB of space on the next-gen PlayStation.

Xbox One players should be able to start preloading Black Ops Cold War on November 5.

Likewise, the pre-downloading period on the Xbox One will begin on November 5 at 9 PM PT:

The file will take up slightly less space than on the PS4, confirmed to be 93GB, but again, those who are not interested in playing the campaign and/or Zombies will be able to delete one or both from their console.

The next-gen Xbox, Series X and S, launch on November 10, so players will be able to start preloading BOCW immediately. However, the file size on both is considerably higher than the Xbox One, currently set to 136GB. 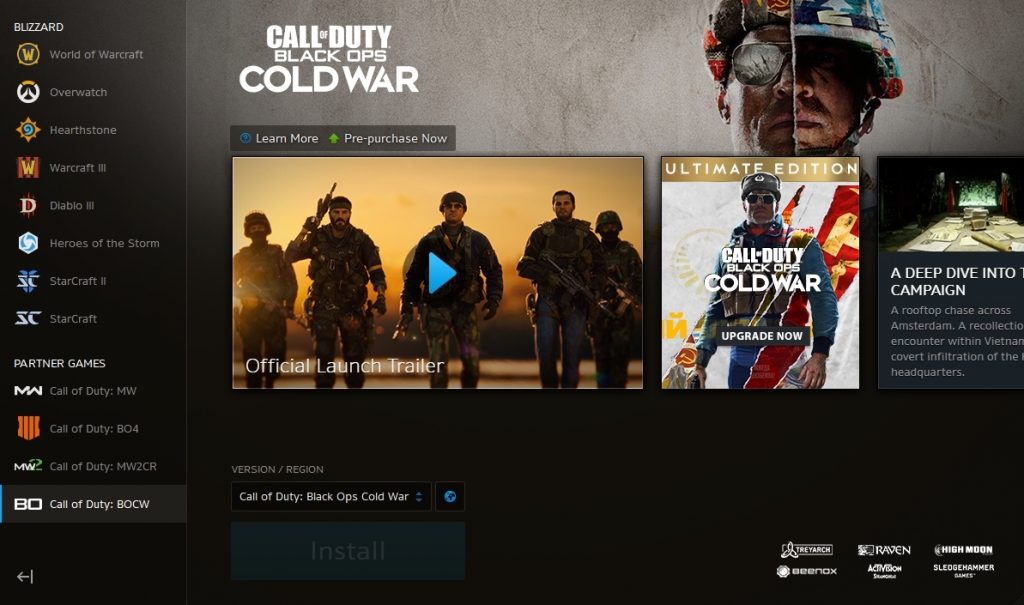 Black Ops Cold War on PC will be exclusively available through the Battle.net launcher.

Black Ops Cold War pre-loading on the PC starts on November 10, so a few days later than on console:

Unlike console, however, PC players will have the option of only installing the specific game modes they want, rather than having to download the full file then deleting the unwanted packs afterwards.

Thus, here’s the file-size breakdown on PC, including how much space it would take when running on the best graphics:

As a result of this information, Activision have also updated the full list of minimum, recommended, competitive, and ultra RTX PC specifications:

Activision released an updated graphic for all the PC specifications to run Black Ops Cold War.

Call of Duty: Black Ops Cold War will be releasing on Friday, November 13 on PC and all current-gen and next-gen consoles.

As always, make sure to follow us on Twitter, @DexertoINTEL, for all the latest CoD news, updates, leaks, guides, and more.

Fans of Call of Duty: Warzone will be pleased to know that Season 2’s secret nerfs to the Agency Suppressor and other Black Ops Cold War silencers will be reverted very soon.

While the Agency Suppressor was originally weak at range, then buffed to fit in line with Modern Warfare’s Monolithic Suppressor, the attachment’s strength appeared to have been weakened in Season 2.

Murmurings spread around the community quickly, with content creator JGOD then confirming what many had begun suspecting — the Agency Suppressor actually hurts your bullet velocity (again). Fortunately, devs have quickly responded and confirmed that this will be reverted.

As JGOD explores in his video, the new update does ensure that in-game descriptions of attachment values are actually reflective of what they do in the game. So attachments that claim to help bullet velocity will actually do so, which was not the case in the past.

The downside, though, is that this means that the hidden buffs to the Agency Suppressor’s bullet velocity (as seen with the FFAR 1) are now reflective of the attachment information. So, as the game says, bullet velocity is now nerfed.

An immediate detriment, the Monolithic Suppressor was considered the go-to Warzone attachment because velocity buffs ensured players could be more effective at hitting shots on the large map. By reverting the buffs to make the Agency Suppressor similar to Monolithic, the update effectively nerfs all ranged Cold War guns.

🛠️We will be returning the Agency/GRU/Wrapped Suppressors to their former glory in the next hotfix. #Warzone

As Raven Software tweeted within a day of the new update going live, Agency, Gru and Wrapped Suppressors will be reverted “to their former glory in the next hotfix.”

This likely means that, in line with the Monolithic Suppressor, these suppressors will enjoy a bullet velocity buff — making them more effective at range and much more viable.

While it may be frustrating for fans to know that these buffs and nerfs aren’t reflected in the patch notes, one can only hope that the new emphasis on transparency in the in-game attachment descriptions will be reflected in the new hot fix. That could be a huge help, as fans will no longer need to test things out themselves to figure out what attachments truly do.