How to fix slow or huge updates for Modern Warfare & Warzone

Modern Warfare and Warzone received a huge update on April 8, but if you are facing a bugged update, with either huge download sizes or excruciatingly slow speeds, this could fix your problems.

The update – which brings in brand new multiplayer maps, weapons and Warzone modes, went live at 7am BST/2am EDT/11pm PDT on April 8, and before long it became clear that players on all platforms were having issues with their downloads.

While the actual download itself hardly goes above 10GB, players have been reporting that their updates are anywhere up to 100GB and, if not, are progressing really slowly, meaning longer wait times to get into the game.

Modern Warfare Season 3 brings a bunch of new content to the game.

After running some tests, we’ve started to figure out the best fixes for the update bug, but they’re slightly different between console and PC, so make sure you check your corresponding platform.

For PlayStation 4 and Xbox One consoles, the fix seems to be a simple one. Whether your download is approaching 100GB or it’s just going really slowly, our best advice is to simply restart your console.

This is the fix that has been widely recommended for issues with any download on PS4 and Xbox, and that doesn’t change here, with players reporting that this is what worked for them, seeing the download size go from 100GB all the way back down to the expected 11GB.

The fix is different for PC players who use the Battlenet client to play Modern Warfare or Warzone (though we would recommend restarting your client anyway, just in case).

One solution we have found is to change your region to the Americas before starting the update. If you’re playing from a different region, such as in Europe, this may be the fix needed to get your update back to normal, though those in the Americas region may want to consider trying others to find a fix.

You may find that the update will occasionally pause, and you’ll need to restart it manually, but eventually, it should get it done. 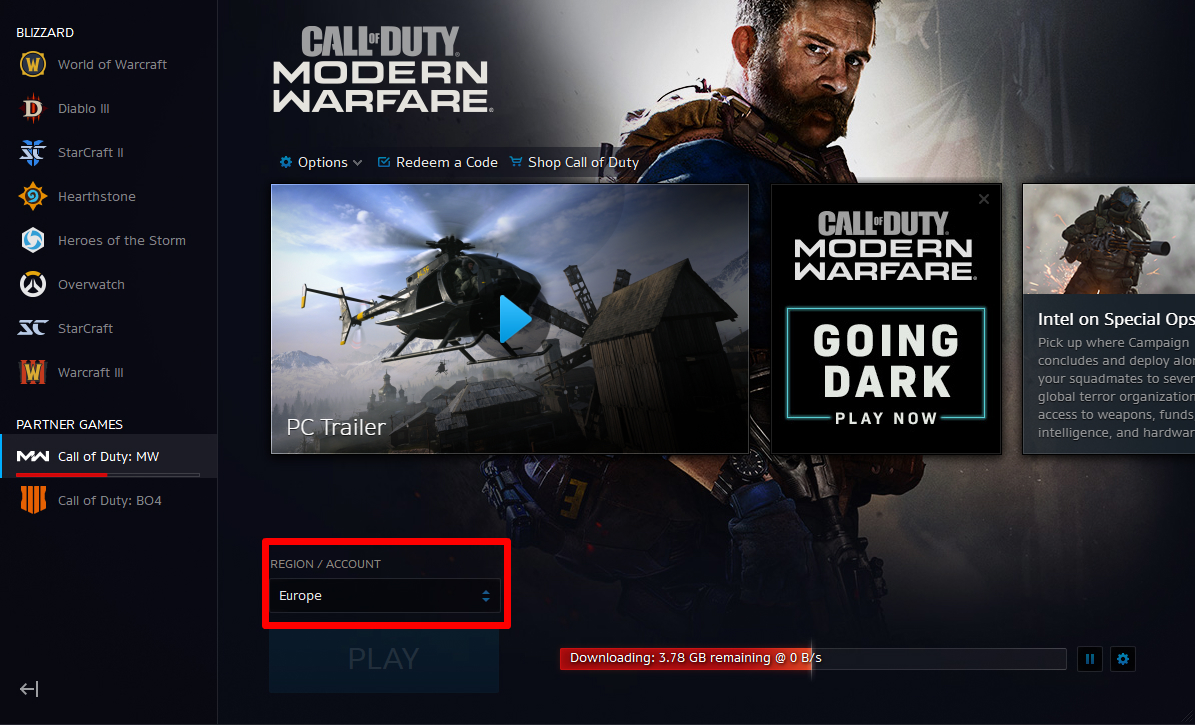 You can change your region in the Battlenet launcher, which may fix download problems.

Blizzard’s support account previously acknowledged these bugs with patch downloads on March 27, and it appears the problem is persisting.

Players have already complained frequently about update sizes in Modern Warfare, which far exceeds 100GB as a whole, and this definitely hasn’t made some players feel any better.

Infinity Ward and Activision have not yet publicly commented on a fix for the update bug, but it’s probably something they’ll look to figure out sooner rather than later.