Four intense matches kicked off the Seattle Home Series on May 22, setting the stage for what should be an exciting weekend of Call of Duty League action.

While teams don’t face elimination on the first day of a Home Series, the eight sides competing at CDL Seattle came in knowing that their first match would dictate what sort of pressure they’ll be facing on Saturday.

Chicago Huntsmen, London Royal Ravens, Minnesota ROKKR, and New York Subliners all won their matches, which means they’ll be playing for a semifinal spot on day two. On the flip side, however, Paris Legion, LA Guerrillas, OpTic Gaming LA, and Seattle Surge lost on Friday, so they’ll be fighting for their lives right out of the gate tomorrow.

There was a lot of attention surrounding Royal Ravens following their roster change that saw Zer0 arrive from New York Subliners and take the spot of Jurd in the starting lineup.

A win right off the bat was exactly what they needed to gain confidence in the move, but it didn’t come easy. The series was a back-and-forth affair, as London won the game one Hardpoint on Gun Runner 250-159 and the Domination on the same map 159-135, while Guerrillas took Picadilly S&D 6-3 and Rammaza HP 250-236.

The series then came down to S&D on St. Petrograd, which Royal Ravens took 6-3 to seal the victory and advance to the Group A final. For Los Angeles, on the other hand, it was yet another loss to open a Home Series for a team that now sits at a league-worst 2-10 record.

Call of Duty League history was made at the Seattle Home Series as the Surge became the first team to make a mid-series substitution, bringing in Pandur for Enable during the game two S&D on Arklov Peak.

Enable, who was recently reinstated to the starting lineup, temporarily went back to the bench so that Pandur could take over for the non-respawn mode – the first time the CDL’s substitution rule has ever been used.

For the first time ever, a team is making a substitution mid-series!@SeattleSurge have moved @CaseyPandur back into the lineup for @Enable ahead of the Search & Destroy vs @Subliners

Unfortunately for Seattle, it didn’t end up working, as New York won 6-5 to take a commanding 2-0 series lead; they had already gotten off to a fast start with a 250-195 victory on Gun Runner HP.

Surge did make a contest of it, winning the tight Gun Runner Dom 154-151, but Subliners sealed the deal with a 250-200 win on St. Petrograd HP, thanks partly due to the stellar play of their star veteran ZooMaa.

Easily the most anticipated matchup of the day as many wanted to see how the powerhouse Huntsmen squad would operate in their first-ever match with new signing Prestinni.

You could say it was business as usual – Chicago took a quick 2-0 lead following a 250-203 win on Azhir Cave HP and 6-2 on St. Petro S&D, and although Paris made it a series with a 174-136 victory on Gun Runner Domination, their dreams of a reverse sweep were shut down on Hackney Yard HP, which Huntsmen took 250-236.

Legion could be in for another first-round exit on day two, which would be their second in a row, as their losing streak has now ballooned to four after what was such a promising start to the season.

This is why they call @scump the KING ?#Huntsmen | #CDL2020 pic.twitter.com/ITp9kOOpP5

This turned out to be one of the most entertaining series of the season so far, as the two powerhouse squads traded shots in a tightly-contested affair that went the distance.

Thus, it was fitting that the game five Arklov Peak S&D would go all the way to a round 11, the second of the series, but this time it was Minnesota who clutched up to clinch the victory.

Led by a commanding Game 5 performance from @GODRX, Minnesota @ROKKR lock in the 3-2 series over @OpTicGaming Los Angeles!#ROKKR | #CDL2020 pic.twitter.com/FLOWhgwJOs

However, this exhilarating matchup was slightly overshadowed by some angry complaints from the OGLA players, afterward, regarding the CDL servers. SlasheR’s tirade was furious in particular, as he blasted the league about connection issues and went as far as to say he’d “rather not play.”

Saturday will be a lot more cutthroat as only four of the eight teams will be left standing once the six matches are played out. In Group A, Royal Ravens will take on Subliners for a spot in the semis, while Guerrillas will face Surge to see who survives elimination, at least for one more round.

As for Group B, it will be Huntsmen vs ROKKR for a semifinal berth, and one of either Legion or OpTic Gaming will be going home after the first knockout match. 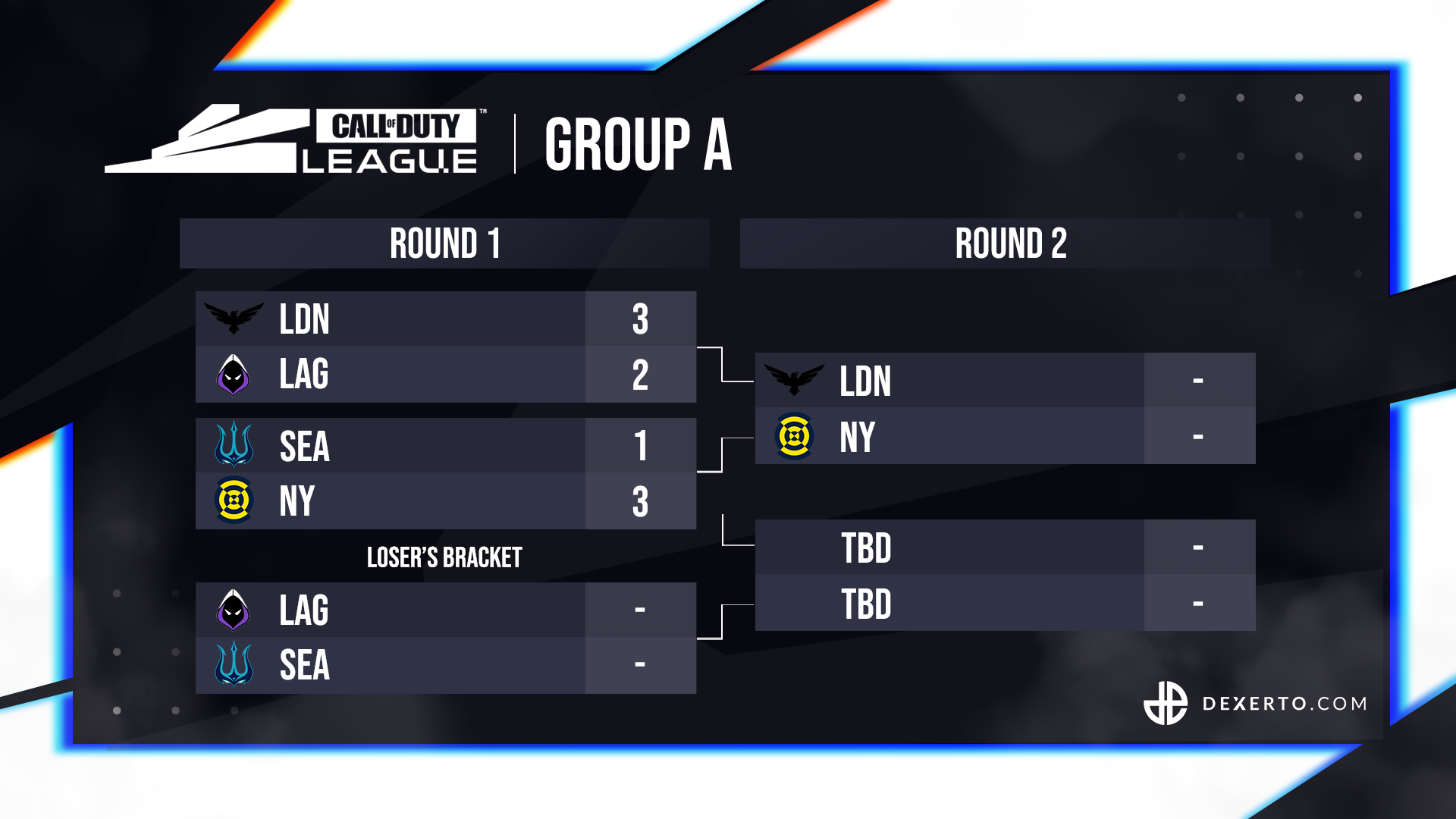 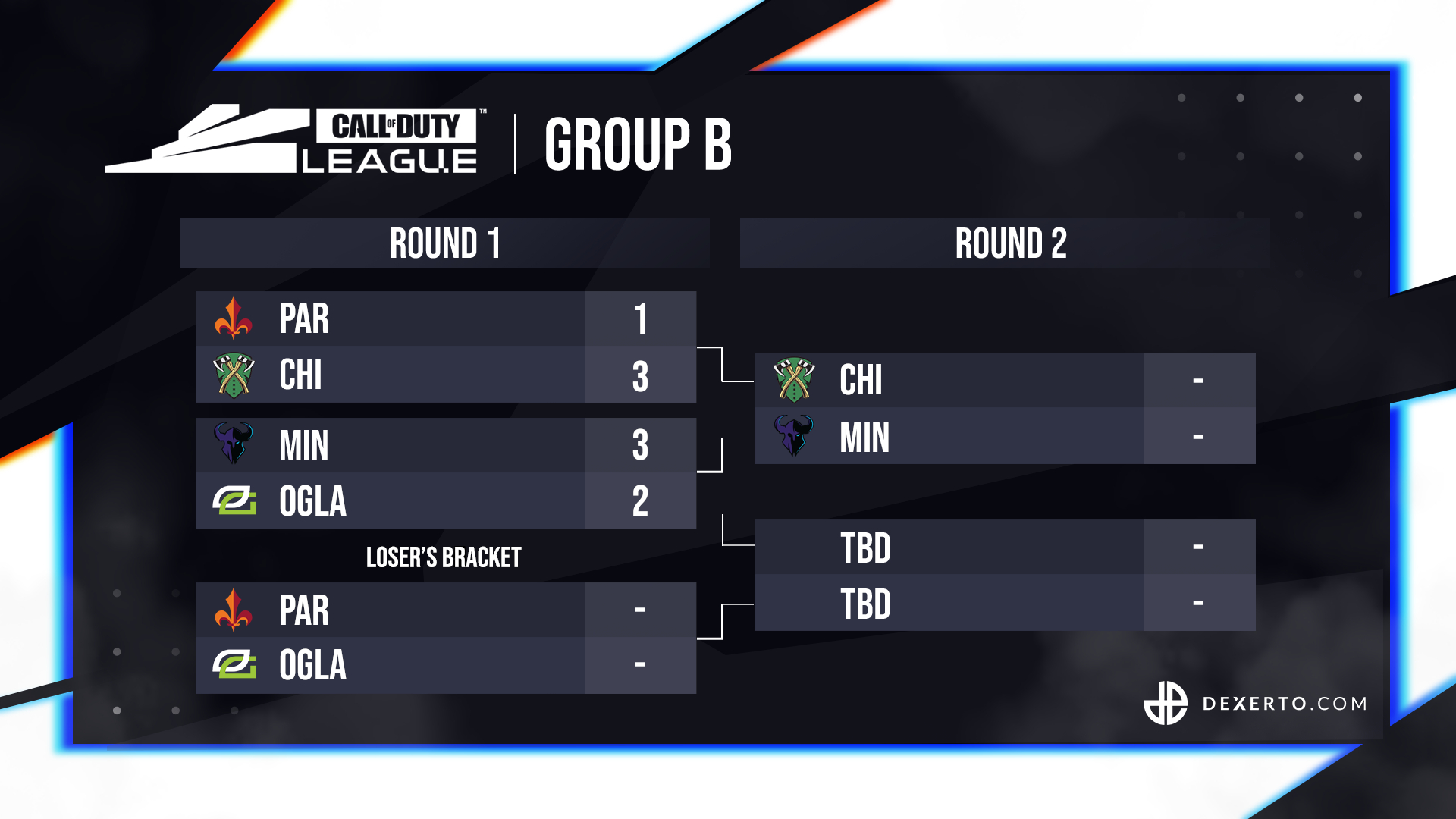 Remember, you can watch these matches live and keep up with all of the Call of Duty action via our CDL Seattle hub, which includes streams, updated scores, brackets, and more.