Day 2 of the Call of Duty League’s Minnesota Home Series has come to an end and the playoff bracket is set for what will be an electric Championship Sunday with some top teams still in action.

While no one was eliminated on the first day of the Minnesota Home Series, Saturday was a whole different story as four of the eight teams saw their tournament dreams come to an early end.

Florida Mutineers, Atlanta FaZe, Los Angeles Guerrillas, and Dallas Empire all did what they had to do to make it to the next phase of the tournament, which means that Toronto Ultra, Minnesota ROKKR, Chicago Huntsmen, and Seattle Surge were all knocked out on Day 2.

Easily the match that fans were looking to the most, FaZe pulled off a remarkable reverse sweep against Empire to lock up yet another spot in the semifinals. Ironically, for a series that went the distance, none of the individual games were really that close.

THEY DO IT AGAIN! ?@ATLFaZe reverse sweeps @DallasEmpire to lock in their CDL Sunday spot in the Minnesota Home Series!#EZAF | #CDL2020 pic.twitter.com/crvnc7F5wy

The result extended FaZe’s winning streak to six matches while allowing them to maintain their perfect group-play this season. As for Empire, their own five-game winning streak came to an end as they were sent down to the losers bracket for the first time since CDL Los Angeles.

The theme of this tournament so far has been Game 5’s and reverse sweeps, and this match held true to both. It looked like Surge were on their way to yet another early exit after ROKKR took a 2-0 lead, winning Azhir Cave HP 250-217 and Arklov Peak S&D 6-2.

However, somehow Seattle found a way to motivate themselves and stage a very impressive comeback, winning Gun Runner Dom 165-155, Hackney Yard HP 250-128, and St. Petrograd S&D 6-2, which concluded with a fun 1v1 between Slacked and SiLLY.

Pure ice from @Slacked in this 1v1 clutch for the reverse-sweep ?#DrownThemOut | #CDL2020 pic.twitter.com/240YC9kbDI

What’s not fun is the form that Minnesota currently find themselves in. After solidifying themselves as a top-four team for much of the season, they’ve since been on a major downswing, this loss being their fourth in a row and seventh out of their last nine.

So far, this was one of the very few series this weekend that has followed the script, as Empire were not going to allow Surge to continue the theme of pushing better teams to the distance and sneaking off with an upset.

Elite ♥ spray painting from @Clayster in our @ScufGaming Play of the Game. pic.twitter.com/lPHWsBx1Jh

The victory pushed Empire to yet another semifinals appearance, as they aim to become the first team in CDL history to win three Home Series events. On the flip side, it was yet another group-stage exit for Surge, but their performance was much-improved and they even got a win against a team not named Guerrillas.

Both coming off roster changes leading up to this event, it was Mutineers and their new man Owakening who got the upper hand in this matchup, locking in an early semifinal spot.

It looked like the series could be a tight one, after Florida won the Gun Runner HP 250-222 and LA answered with a 6-5 win on Piccadilly S&D. However, Mutineers really tightened their grip the rest of the way, winning 177-126 on St. Petrograd Dom and 250-108 on Rammaza HP to seal the victory.

This was a very important win for the team, who had been swept twice in the first round of their last event, and a huge vote of confidence in Owakening, who proved that he could hold his own in the CDL.

Florida @Mutineers kick off Saturday play in the Minnesota Home Series with a 3-1 win over @LAGuerrillas.#FearTheDeep | #CDL2020 pic.twitter.com/Lm3xGnqZzj

Forced into a rare early trip to the losers bracket, Huntsmen were not about to get eliminated in the first round, ripping apart Ultra in a series that was pretty one-sided after the first map.

Things started tight as Chicago barely hung on for a 250-245 win on Rammaza HP, but then they began asserting their dominance, taking the Rammaza S&D 6-2 and St. Petrograd Dom 167-130.

After a promising performance in the previous Home Series that saw them reach their first semifinal, this was a huge disappointment for Toronto, who also lost to the league-worst LA Guerrillas on Friday.

250-245: Chicago @Huntsmen start the series with a closely-contested Hardpoint win over @TorontoUltra.

Easily the biggest upset of the weekend, and arguably of the whole season, as Guerrillas, somehow, someway, managed to take down Huntsmen and advance to their first-ever semifinals.

Down to the fifth map, which had serious tournament implications, it was Guerrillas who clutched up for a 6-4 win on Gun Runner S&D to secure the victory and eliminate Huntsmen from the group stage for the first time all year.

Everyone was looking forward to finally watching the first-ever meeting between Huntsmen and FaZe on Sunday, but that’s not going to happen, thanks to Guerrillas.

Instead, Atlanta and Los Angeles will be facing off in the semifinals instead, an unlikely matchup this late into the tournament but one that LA fans will relish considering how lowly the rest of the season has been.

In the other half of the bracket, it’ll be Florida vs Dallas, only the second time the two have faced off this season (the first was a 3-0 win for Empire at the Los Angeles Home Series). If the favorite in each side advances, we’ll be seeing FaZe vs Empire in the Grand Final, a repeat of the CDL Chicago championship match that the latter won 3-1. 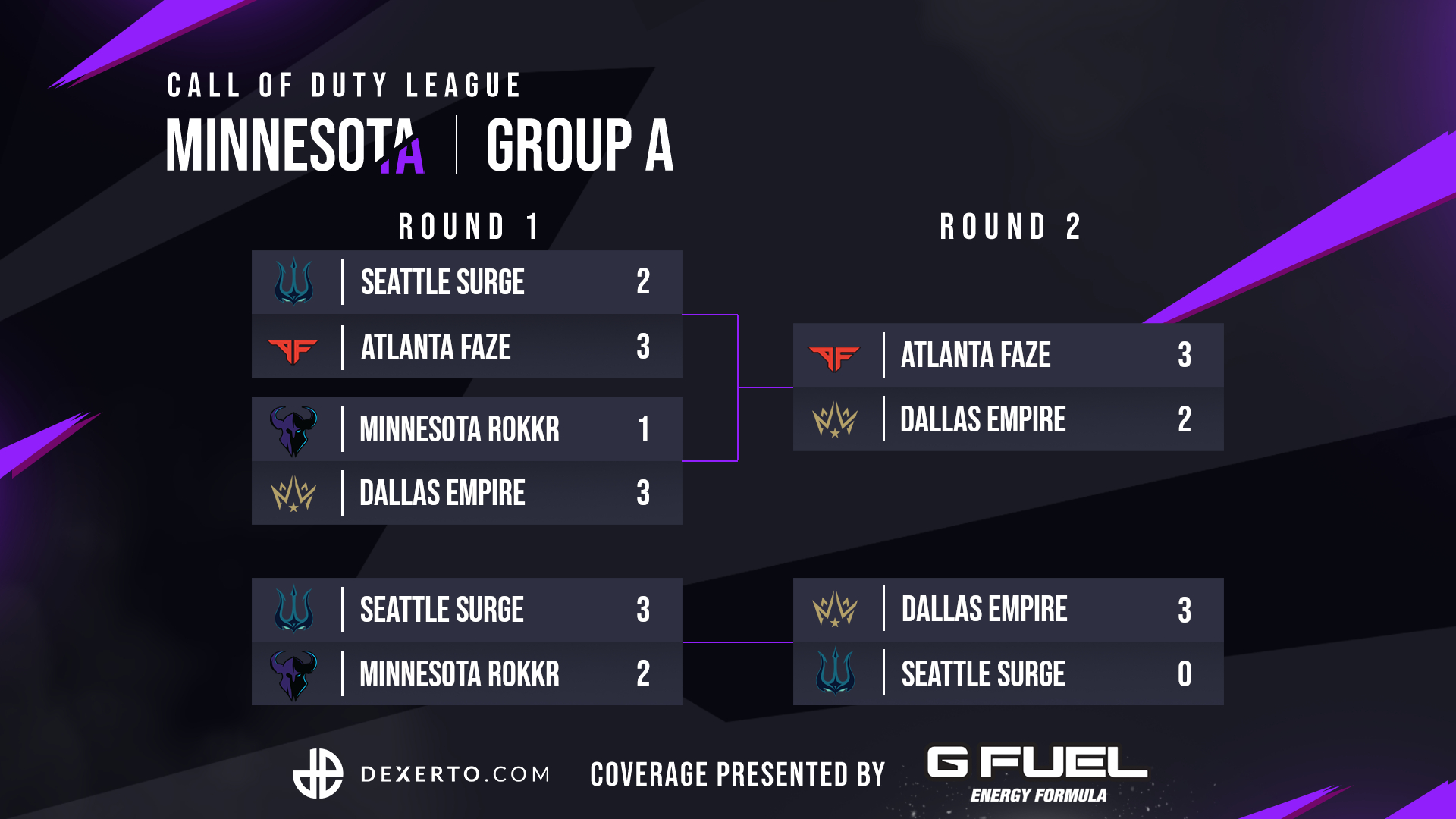 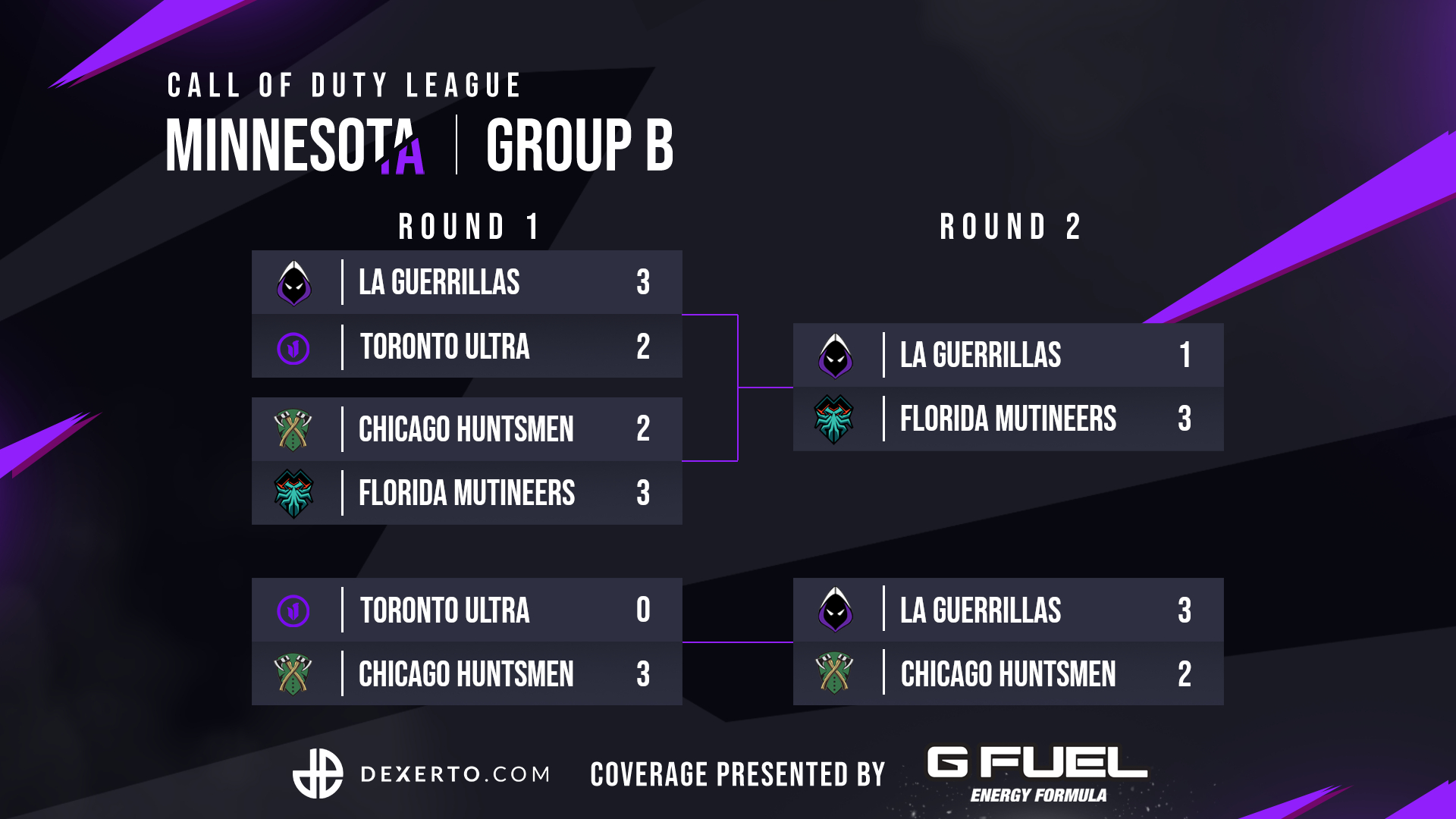 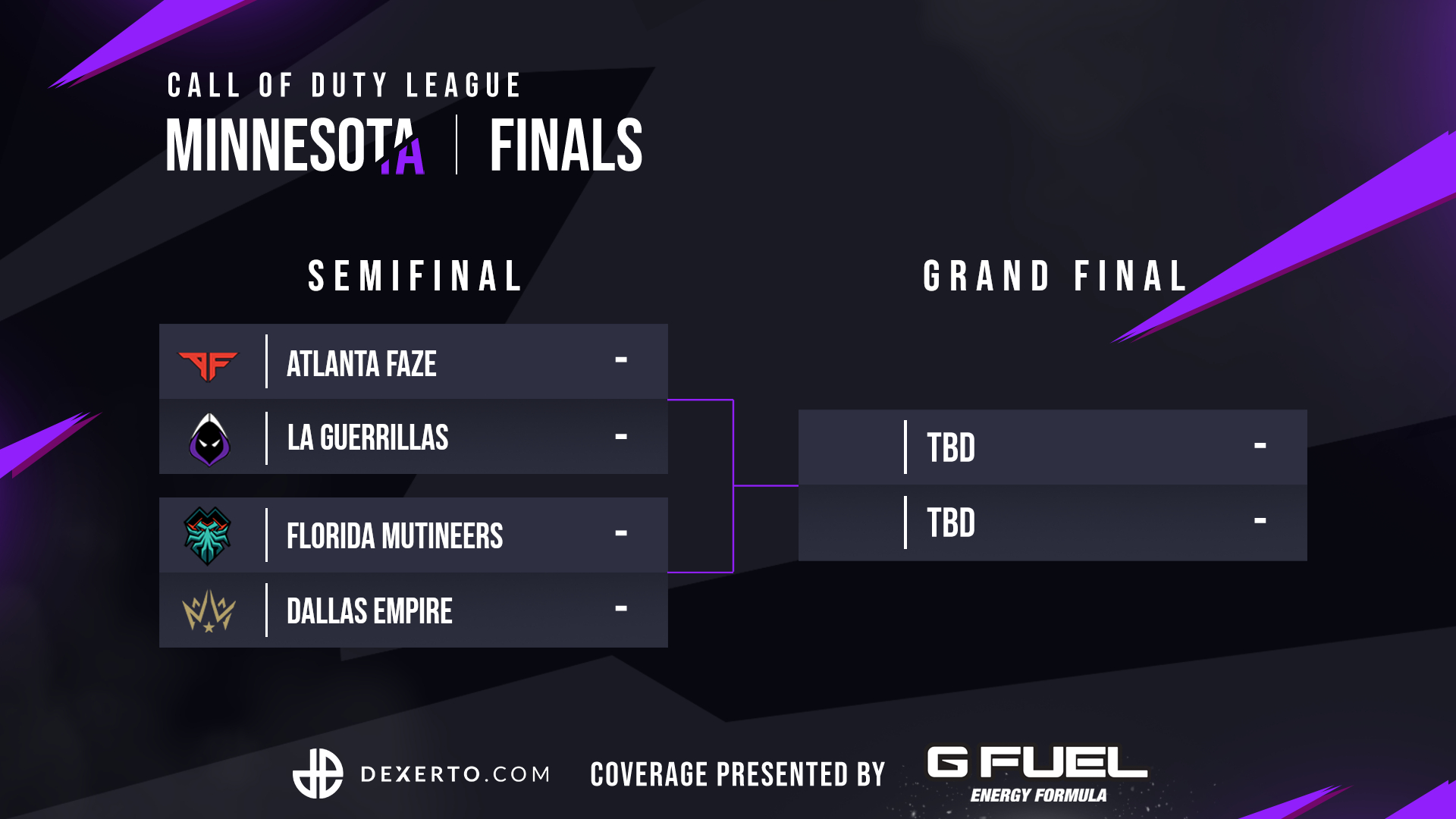 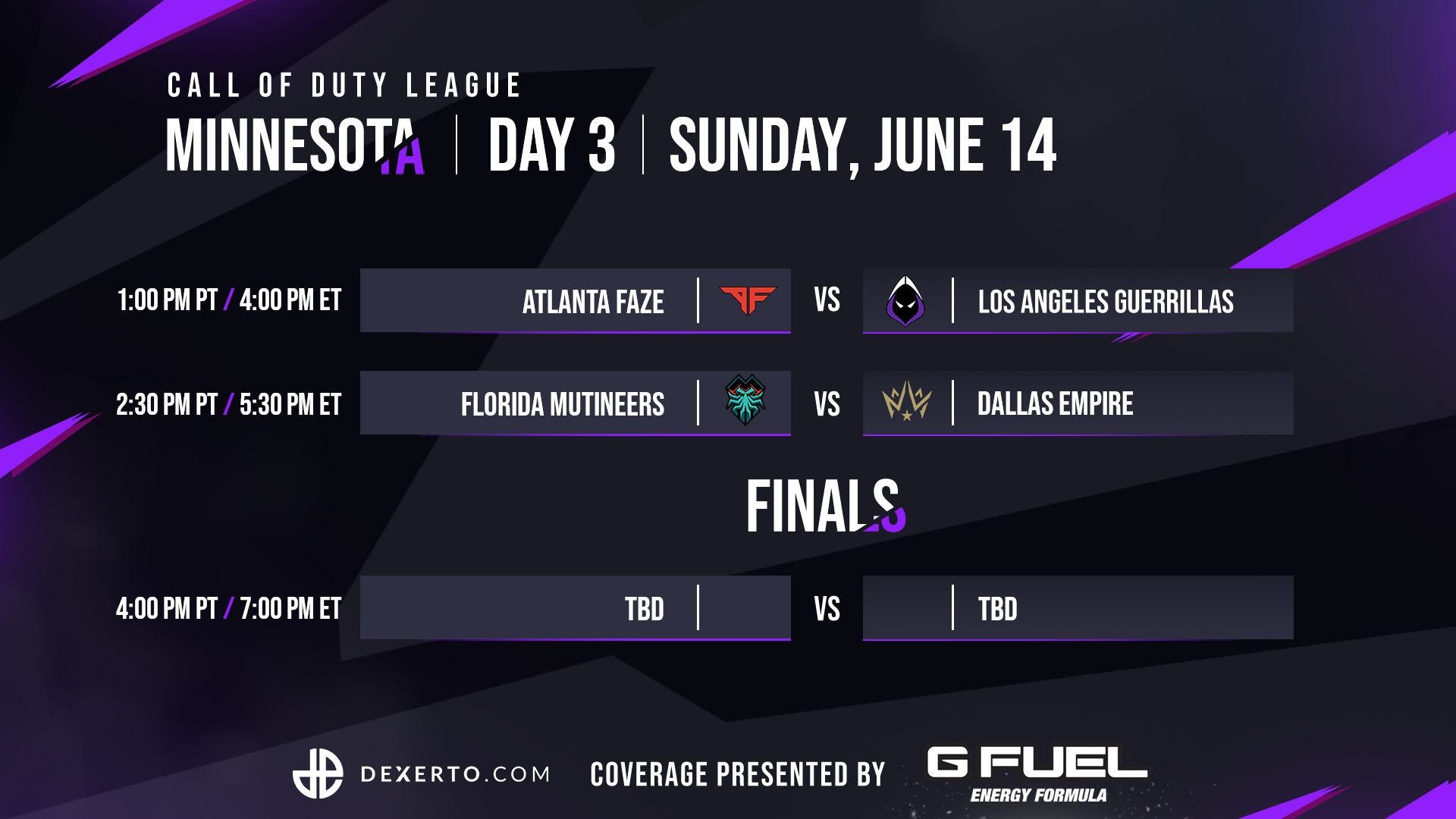 Also, make sure to check out the CDL Minnesota final placements to see who’s in and who’s out of the tournament, as well as the CDL Points they’ve earned.

Remember, you can keep up with all of the Call of Duty action and watch these matches live via our CDL Minnesota hub, which includes streams, updated scores, brackets, and more.