Call of Duty: Black Ops 4’s Blackout battle royale mode has been a big hit the community since the game was released in October, but there’s always room for improvement.

One of the many things that Treyarch did right with their first attempt at a battle royale title was to play into the nostalgia of Call of Duty’s core fanbase with various maps from previous Treyarch games implemented into the much larger Blackout map.

But one fan thinks the time has come to add even more of those classic points of interest and we have to admit that some of them have completely captured our emotion!

Reddit user ‘tr7272’ submitted a post titled ‘Would you guys like it if Treyarch added some (not all) of these maps?’ and we’re immediately drawn to the two locations that have been added to the ocean in the attached image. 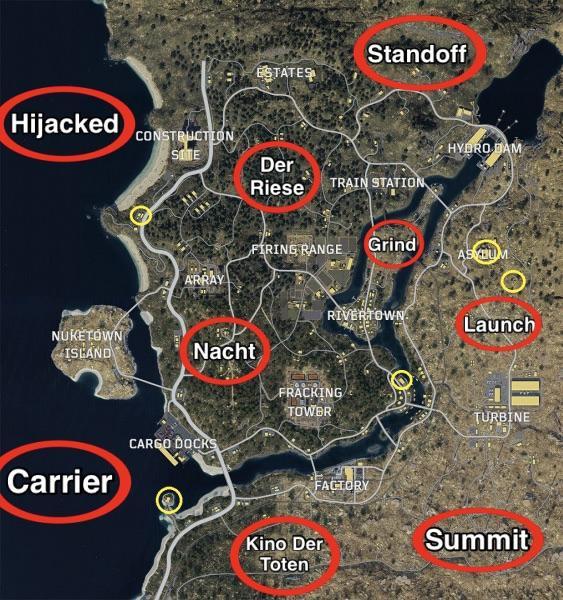 While we would have absolutely no complaints if any of the suggestions were added, the idea of landing on Carrier or Hijacked and getting some great loot before risking the treacherous crossing back to the mainland seems pretty damn cool!

Hijacked and Carrier were both popular multiplayer maps in Black Ops 2. Hijacked was set on a huge, luxurious yacht, while Carrier saw players battling on a Chinese aircraft carrier.

The idea of classic Zombies maps like Der Riese or Kino de Toten is also pretty appealing, especially considering the fact that Blackout already features its fair share of the undead monsters.

It seems likely that Treyarch left space in the Blackout map for this exact purpose and that classic maps will continue to be added, or removed, throughout the year and beyond. For now, though, we can only imagine what those additions might be.