Battlefield V’s PC Beta has a profanity filter built into it’s chat function, that seems to censor any variation of the term ‘[email protected]

Replying to a question on Twitter, Ajmal confirmed that the profanity filter would be in place for the beta, reasoning;

“It’s Battlefield where players are suppose[d] to treat each other with respect in chat. It’s actually sad that things like these are needed.”

Ajmal also feels that dialogue between characters is a separate issue from chat between players, as two characters in game speaking to each other isn’t a real discussion. 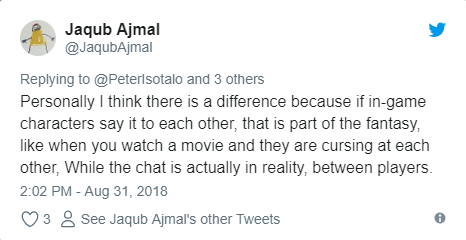 What’s interesting to note, is the fact that any attempt to type ‘DLC’ into the chat will be censored.Originally found by Reddit user ‘nismos14270r’, any variation, including spacing the letters out and even capitalising random letters will be replaced by stars.

Other terms like ‘Jew’ or Nazi’ have been included in the filter, due to the possibility of players using those in an offensive way. ‘Hitler’ has not been banned from use in chat, but that could change.

By banning the use of the phrase ‘DLC’ in chat, it seems that EA and DICE are dead set against players discussing any of the downloadable content that Battlefield releases, even though it’s been confirmed to be only cosmetic changes.

The Battlefield V beta is live right now, with the game set to release on November 20.