The announcement of Apex Legends’ next in-game event, the Grand Soirée Arcade, means that Respawn Entertainment will be releasing another update for the battle royale title before the conclusion of Season 3 and start of Season 4.

Season 3 is winding down in Apex Legends, but Respawn Entertainment have one more update up their sleeves before the player-base turns their attention to Season 4.

In addition to launching the content-packed Grand Soirée Arcade in-game event, this next update is expected to implement some quality-of-life improvements.

It will be going live on Tuesday, January 14, and will more than likely be the final major update before Season 3 ends on February 4. That said, there might be some minor hotfixes and server updates rolled out before then.

Below, we’ve outlined what we expect will be included in this update, aside from the Grand Soirée Arcade launch. Some of these have been confirmed by Respawn while others aren’t guaranteed to be included but indications are that they will be.

Grand Soirée Arcade will be the final event of Season 3 in Apex Legends.

The December update that launched the Holo-Day Bash holiday event unintentionally introduced a bug causing players’ outfit skins to show on their teammates’ characters in the Legend selection screen prior to the start of matches.

A Reddit user complained about this issue, which caught the attention of Josh Medina, a Game Designer at Respawn, who revealed on January 10 that a fix for this issue “should be in this upcoming patch.”

This was obviously something that players had been waiting to hear for a while because Medina’s reply was instantly met with a lot of gratitude and excitement on Reddit. 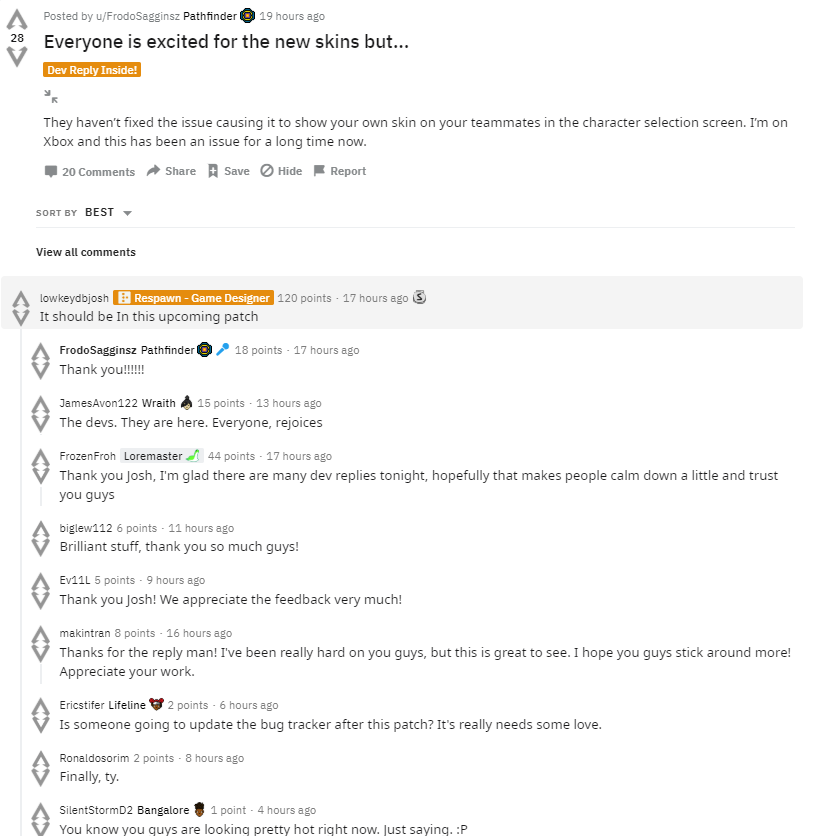 Another major issue currently plaguing the game has to do with the third-person easter egg in Firing Range. Players have noticed that when entering third-person mode as Caustic and placing one of his Nox Gas Traps, the gas that the activated trap releases blocks shots from going through it.

One player captured some in-game footage of this bug in full effect and posted it on Reddit.

I was 3rd person training in the firing range, getting ready for the new event and i found this. Hope this is not in the actual game. from apexlegends

The reason why this is suddenly concerning players is that Respawn revealed that a Third-Person LTM would be coming as part of the Grand Soirée Arcade event, so they want to make sure that this issue wouldn’t carry over into the new mode.

Fortunately, this caught the attention of ‘RaymeCV,’ an Engineer at Respawn, who revealed that this was one of “a lot” of fixes and improvements being developers for the upcoming LTM.

Muzzle flash is too bright and blocks visibility in dark areas

If there’s one aspect of gunplay and weapon mechanics that Apex Legends have consistently complained about, it’s muzzle flash. While tolerable in the outdoor areas, the flash can become unbearable in darker areas because, for some reason, it flares up and can block the shooting player’s line of sight.

On January 10, Josh Medina revealed that a fix for this is coming “soon” and explained that the reason it’s been taking longer to implement is that it’s a “deeper issue than expected” and they want to “properly fix instead of half-a*s it.”

This is, by no means, a confirmation that the fix would be coming in this next update, but there is a chance Respawn will have it ready by then. If not, players can probably expect it sometime in Season 4.

Muzzle flash has been a deeper issue than expected, we are adjusting it so we want to properly fix instead of half ass it but it takes time #Soon

One of the biggest exploits that’s ever existed in Apex Legends is one that allows players to avoid the penalty of dying early in Ranked Play by simply “dashboarding,” or closing the entire game and starting it up again.

As a result, a lot of players have managed to reach very high ranks because they’ve never had to lose any points and only counted matches in which they gained score.

According to Eric Hewitt, Senior Systems Designer at Respawn, “Judgement Day will be coming” for players who abused this exploit and that “things will be handled soon.”

hey, no need to report it manually, we can see it on our end. Judgment Day will be coming 🙂

there will be more immediate punishment in the future, just have to get everything lined up appropriately. We care deeply about the ranked experience, so things will be handled soon

This will, of course, come in addition to the exploit itself being patched. However, Hewitt stopped short of providing a timetable, so it’s unclear when exactly this will all be implemented, with there still being a chance that it may come in this next update.