Apex Legends’ newly-announced Grand Soirée Arcade event is set to bring a lot of new content to the battle royale title, including a plethora of exclusively-themed cosmetic items.

With Season 3 winding down in Apex Legends, developers Respawn Entertainment will be sending it off with an extravagant two-week event called Grand Soirée Arcade, which begins on January 14.

In addition to the seven limited-time modes that the event will feature, there will also be plenty of cosmetic items, such as outfit skins and weapon camos.

While most of these items will be purchasable in the in-game store, some will be free to players who complete the required challenges and objectives.

We’ve put together a full list of all of the confirmed cosmetics for this event below. 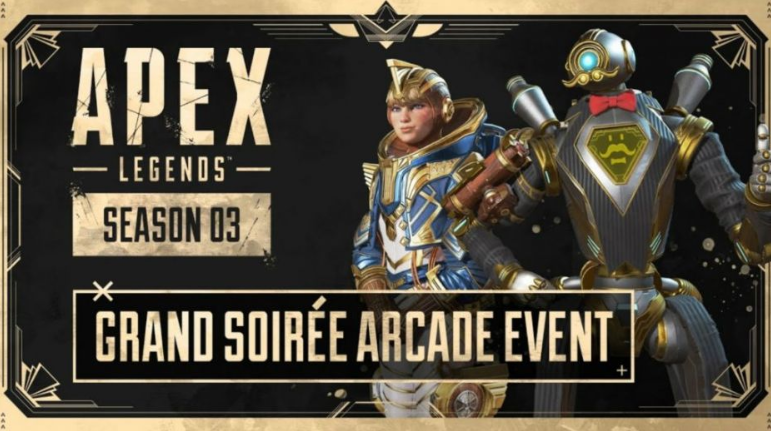 The Apex Legends Grand Soirée Arcade could be one of the game’s best events yet.

In order to unlock these items, players will have to earn a specific amount of event points by completing challenges in each of the LTMs. Each mode will have three challenges worth a combined 1,000 points.

The first camo, for the Peacekeeper, can be unlocked at the 500 point mark.

The next available item is a skin for Mirage that features a gold, black, white, and red color scheme and actually looks pretty cool, especially for a free outfit.

This can be unlocked upon accumulating 750 points in the event tracker.

The third item on the list is a fiery-looking R-301 weapon camo. This one will require considerably more grinding of the LTM challenges than the previous two, as it’s available at the 2,000-point mark.

The fourth and final free event cosmetic is a pretty-spectacular looking Havoc weapon camo, which will require players to collect a whopping total of 5,500 points to unlock.

The remaining cosmetic items will be regularly rotated in the in-game shop for players to purchase. Respawn have confirmed that there will be Legendary skins as well as Art Deco-inspired ones that will cost $5.

Six of the new Legendary skins will also be added to the core loot pool at the start of the event for players to craft or obtain through Apex Packs at any time, in addition to being able to purchase them directly.

All of the items below are ones shown in the Grand Soirée Arcade reveal trailer, so it’s safe to consider them confirmed. Special thanks to popular Apex data-miner ‘That1MiningGuy‘ for supplying these screenshots.

Another look at the Pathfinder mustache skin

Skins for Wattson and Caustic

Skins for Octane and Mirage

Another look at the new Bangalore skin

The Apex Legends Grand Soirée Arcade event will kick off on Tuesday, January 14 following the conclusion of the Holo-Day Bash holiday event.

It will go on for two weeks before wrapping up on January 28, just a few days before Season 4 is expected to launch on February 4.