He wanted to experience the as-yet unreleased Smash Bros Ultimate, the upcoming installment in the Smash Bros franchise.

He Tweeted out his wish on September 12, but worried that the game would be “out of reach” in his lifespan, and feared that he wouldn’t get to play it come it’s release date in December.

“I know it’s childish to despair over a video game,” Chris wrote, “but Smash means a lot to me and when ultimate looks so good, it breaks my heart.”

His concerns didn’t fall on deaf ears. The Smash fanbase took to Twitter in an effort to plead with Nintendo for Chris’s chance to play the title, including some of the series’ top players.

Melee pro Hungrybox was one of them. “A member of the community, @SpookyWoobler, is bedridden with terminal cancer,” he Tweeted to Nintendo. “His wish is to play Ultimate before it’s too late. I know how exclusive the company is with this, but perhaps we can bring him a demo at least?” 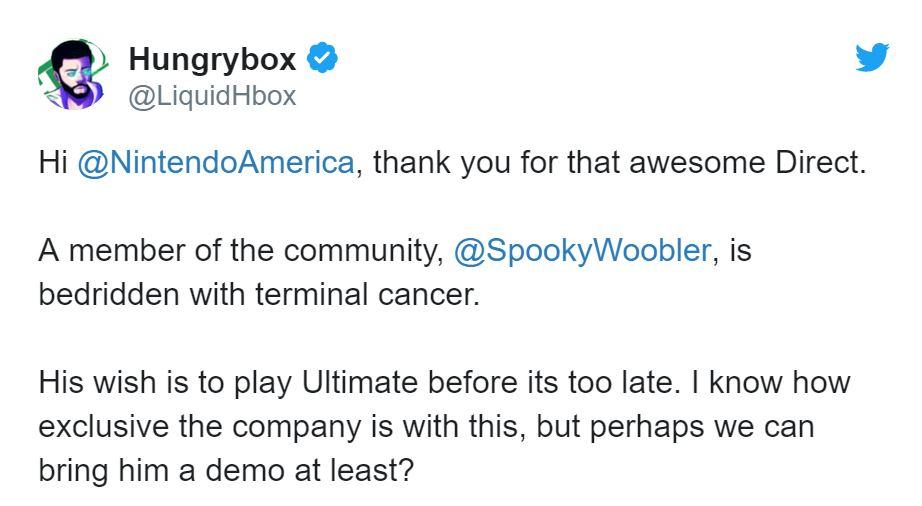 The community spoke out, and Nintendo came through. Chris posted a triumphant status to Twitter, which revealed that two representatives from the company came to his home and allowed him, his brother, a friend, and his mother a three-hour trial with the game’s E3 demo.

Some pics from me, local Benjamin, and Zach playing

Thanks so much guys, this means so much to me pic.twitter.com/raxPu7QJp9

Chris was extremely grateful to the Smash fanbase for helping him achieve this dream. While he didn’t get to keep the demo, Nintendo’s – and the Smash community’s – actions speak volumes about their passion for both the game and their playerbase.