The bounty and wanted system in Red Dead Redemption 2 is complex, and deliberately so, but once you understand the system, you can avoid getting a bounty ever again.

Rockstar doesn’t give too much explicit detail on how exactly the bounty system works, and at first everything will feel a little random.

You are told that using a mask to cover your face will protect your identity while committing crimes, but this is only partially true, as will be explained.

The first thing to understand is witnesses. Any individual or individuals who see Arthur commit a crime, from disturbing the peace to cold blooded murder, will become witnesses. You can see these witnesses marked on the mini-map with an eye symbol. Use a mask around them and stop and intimidate them into not talking if there is only one of them.

If you do not use a mask, witnesses will immediately recognize you as Arthur Morgan. You will know if they have recognized you are not, as it will either say ‘Unknown Suspect’ or ‘Arthur Morgan’ underneath the Wanted sign in the top right.

This wanted loop, via Reddit user BurayanFury, comes from the Red Dead Redemption 2 companion app, and provides the best breakdown of the Wanted and Bounty system, and how to never get a bounty. 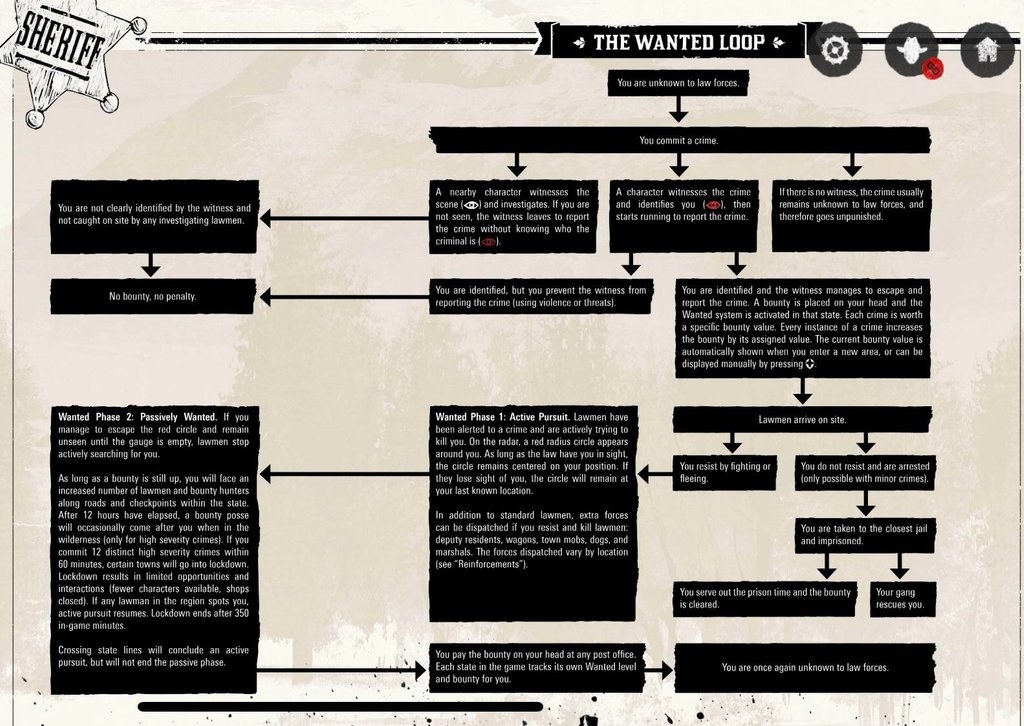 If the eye on the mini-map is white, they know some kind of commotion has occurred, but they don’t know by whom or what. As long as you flee the scene quickly, you will get no bounty, as they do not know your identity to report to police.

These witnesses didn’t get a good look at you either, and so as long as you have not committed a crime in that same area before wearing the same clothes and you are wearing a mask, simply escape the scene and you will not get a bounty.

These witnesses have seen the crime and know exactly who you are. These witnesses you definitely want to stop and intimidate them into not talking. However, if there are multiple dark red eye witnesses, you are best to just flee the scene and accept your bounty.

Lawmen appear to have super powers in Red Dead Redemption 2, as even if you are wearing a mask, they will immediately recognize you as Arthur Morgan through any disguise. If this happens, you will get a bounty.

If you recently had a bounty in an area, and you return to the same area with the same clothes, hairstyle and horse, you will be instantly recognized when you commit another crime, even if you have a mask on.

If worst comes to worst, and you do get a bounty, you simply need to head to a post office to pay it off.

At lower wanted levels, when you haven’t committed crimes too severe, you will also get the option to surrender to the law. In this case, you will taken to a local jail where you will wait out your sentence, but members of your gang will also come to help break you out.

As explained in this video from TagBackTV, as long as you wear a mask and flee from the scene before any police see you, you will leave the area without a bounty.