Pokemon Sword and Shield released in November to critical praise and enormous sales, becoming the fastest selling Nintendo Switch title to date with over six million units sold in its opening weekend.

Despite having weeks to explore the ins and outs of the Galar region, a professional player hilariously proved that players still have some new tricks to learn when he shared the perfect Dynamax counter that had the community in stitches.

Pro Pokemon player ‘WolfeyGlick‘ shared the method on his Twitter account with a video that shows him robbing his opponent of their Dynamx move.

While in a doubles battle with a foe, the YouTuber exclaimed “Dynamax Excadrill! I’m so nervous I’m literally shaking. Please, Dynamax Excadrill!” before he burst into laughter when his opponent did just that.

It was soon revealed that the other trainer fell directly into his trap, when he used a Grimmsnarl and a Sylveon to pull off an intricate combo of moves that hilariously put a complete halt to his opponent’s Dynamax play.

We found the ultimate Dynamax counter – please RT to save a life: https://t.co/XxggIuFdku pic.twitter.com/27Bw0jcReM

Twitter user and amateur esports commentator  ‘Shinkari‘ did a break down of the method, and explained how brilliant the move actually was for anyone that was confused at what went down.

Wolfey made a gamble that his opponent would use his Excadrill to Dynamax, and used Grimmsnarl’s ‘Trick’ to swap the other player’s move for ‘Eject Button’ – which recalls the Pokemon holding it should they get hit.

To finish off the combo, he also had his Sylveon target the enemy with a quick attack to land the punch, which forced his freshly Dynamaxed Pokemon out. 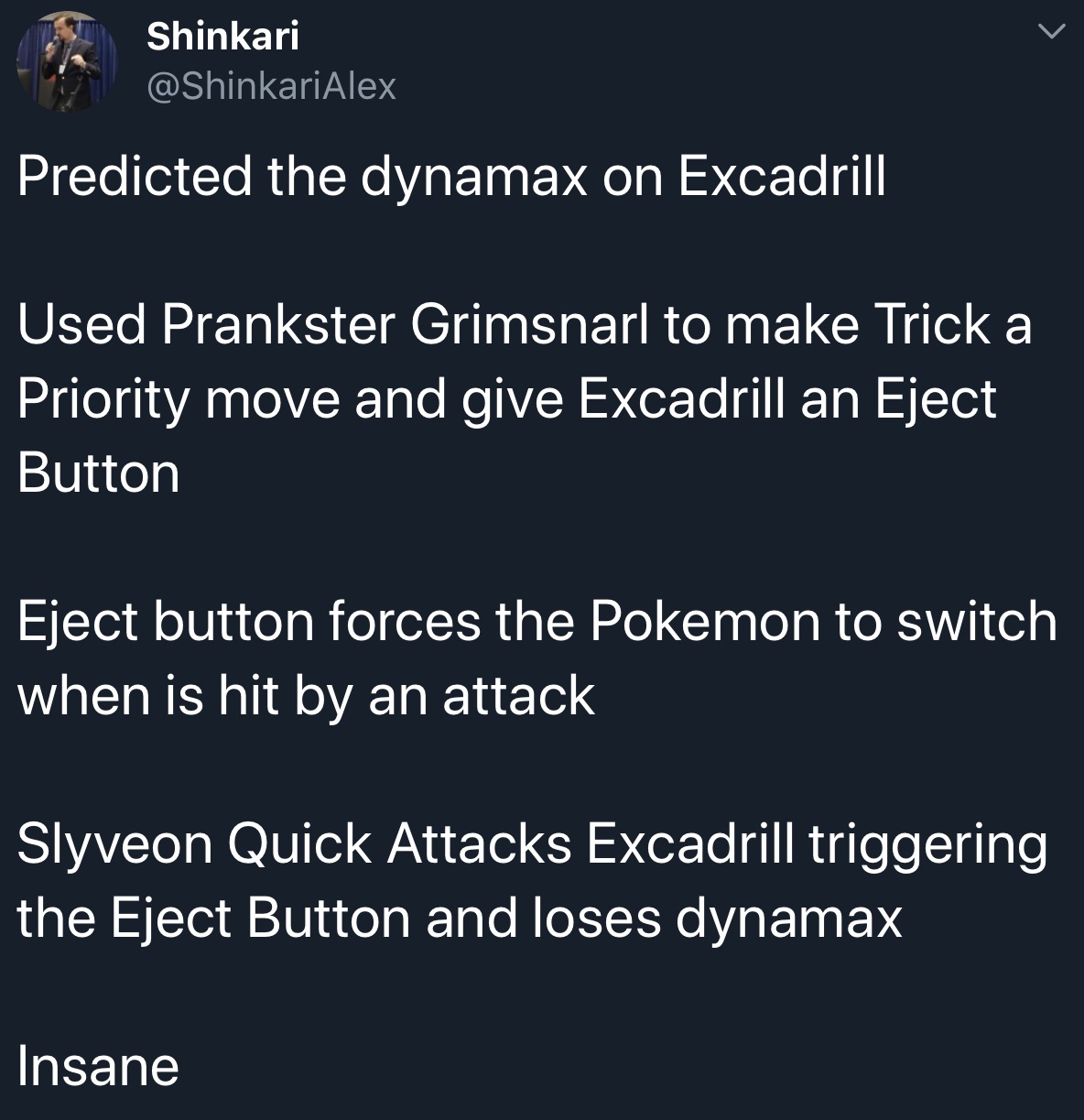 A Twitter user did a brilliant break down of the method by each move.

The comical method posted by Wolfey went viral on Twitter, with the tweet amassing over 35k likes, and the attached video having a staggering 520k views as of the time of this article.

Players continue to find mind blowing tips and tricks in Pokemon Sword & Shield even weeks after release, proving that the game has a lot left to discover.