Trainer battles has been the talk of Pokemon Go over the last couple of weeks. Finally, the Pokemon Go PvP mode is live for trainers level 10 and above!

Trainer Battles are now available for a large portion of Pokemon Go players. The mode is less than 12 hours old. Consequently, there are currently a few teething issues.

The two biggest problems appear to be lag during the battle and starting Pokemon having already taken damage. Forums suggest there are two remedies for these problems.

Elsewhere, challenging Team Leaders has proven to be an easy task. It seems their purpose is to teach you how to battle whilst offering daily rewards.

Community note: When we release Pokémon GO Trainer Battles, we will be rolling out the feature in stages, starting with level 40 Trainers. We do this so that we can confirm the feature is running smoothly before we begin to release the feature out to more Trainers.

The new update appears to be solely focused around the release of Trainer Battles. The patch notes mostly repeat what has already been confirmed through Niantic’s official communication channels.

Features such as battle codes, remote challenges to ultra and best friends, team leaders and Trainer Battle leagues are confirmed. There is also a new loading screen! Here are the full patch notes. 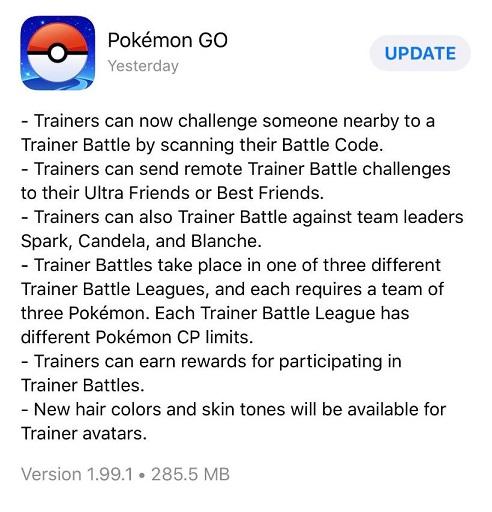 So When is The Release?

With the Trainer Battles Pokemon Go update available now it’s likely PvP battles will be available over the next few days. Observant Pokemon Go players will have noticed that previous updates tend to roll out on a Tuesday or Thursday.

Therefore, there is every chance Pokemon Go players may be experiencing Trainer Battles for the first time tomorrow.

What’s The Hold Up?

A question being asked right now is, if the update is available why isn’t the Trainer Battle features? There are two parts to the update process.

Firstly, the app must be updated. Now the update is available on iOS, this part has been completed. The Android update was available earlier.

Secondly, Niantic must enable the update their side. As a result we are in the final stages before getting Pokemon Go Trainer Battles!