Esports Journalist Rod ‘Slasher’ Breslau hit back at Baek ‘Fissure’ Chan-hyung after a report that he denied came to fruition.

It was recently announced that Fissure had been acquired by Seoul Dynasty ahead of Season Two of the Overwatch League, confirming Slasher’s earlier report that Fissure was looking to make the move.

The possibility of the move was originally reported by Slasher when Fissure was benched on the Los Angeles Gladiators for the playoffs, a stunning and controversial decision by the Gladiators considering the degree to which Fissure had been credited with their success towards the end of the season.

The Gladiators themselves only made a vague statement regarding the reason for the decision, but Slasher reported that it came after Fissure had been unhappy with the level of effort from his team-mates in practice and consequently his own effort had dipped.

Slasher also reported that Fissure wished to leave the Gladiators and join an all-Korean roster, with Seoul Dynasty as his preferred choice.

Fissure came under fire from some fans, who were frustrated to see the team’s star player sit out for the most important match of the season, a quarter-final against London Spitfire that the Spitfire ultimately won.

In the wake of Slasher’s statements, Fissure hit out at the journalist, describing what he’d said as “bullshit” and implying that he’d made it up, tweeting “the source is his thoughts”.

Now, however, the move has gone through, and Slasher made sure to highlight that he had indeed been correct, highlighting Fissure’s denial and reiterating an earlier comparison to Kawhi Leonard, the former San Antonio Spurs star who had a highly-publicised falling out with his team, sitting out matches despite being cleared to play following an injury and ultimately being traded at the end of the season to the Toronto Raptors. 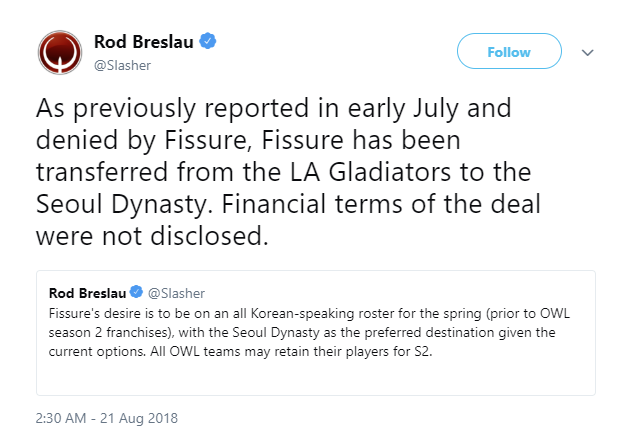 Fissure will next appear as part of the Pacific Division all-star squad for the All-Stars weekend on August 25-26, alongside new team-mates Kim ‘Fleta’ Byung-sun and Ryu ‘Ryujehong’ Je-hong. The schedule for Season Two of the Overwatch League has yet to be announced, but it is expected to kick off in early 2019, possibly with pre-season show-matches in December 2018 if following a similar schedule to Season One.