In one of the most bizarre Overwatch bugs you’ll ever see, Mei is hilariously capable of slanting the entire game and altering the perspective of each and every character.

While the attention of the Overwatch community has been focused on the 2019 Winter Wonderland event and a recent influx of highly-anticipated balance changes, it seems as though Mei has stolen the spotlight thanks to a quirky new bug.

While the whimsical Chinese hero is no stranger to bugs on behalf of her powerful Ice Wall ability, a brand new glitch has players dying of laughter thanks to an amusing interaction with the move. 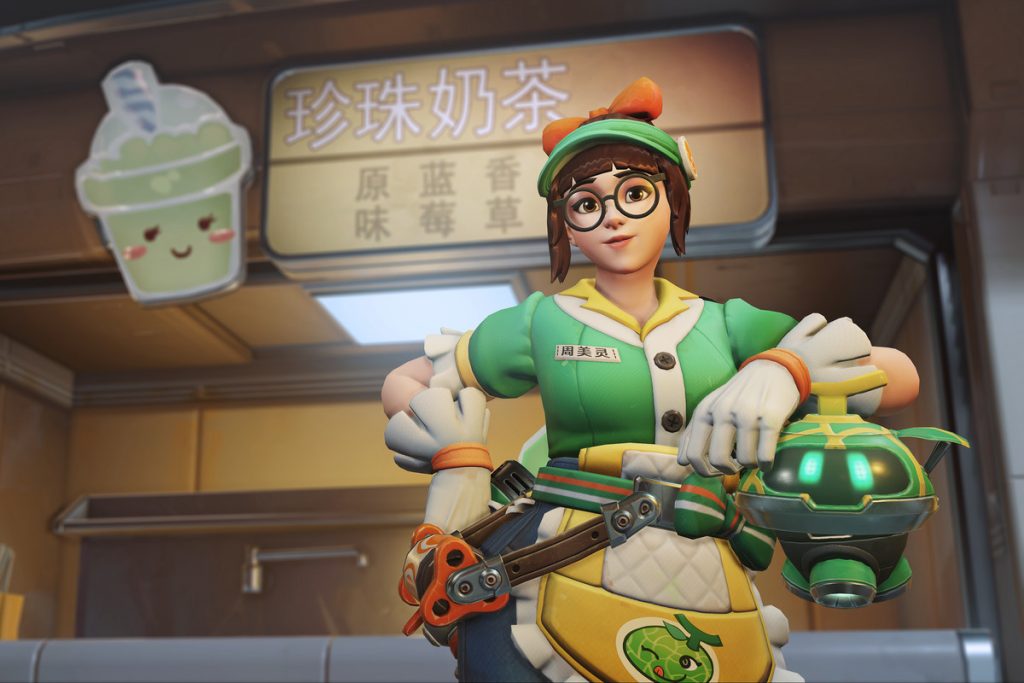 Mei is the instigator of one of the most amusing bugs in the history of Overwatch thanks to her Ice Wall ability.

Showcased throughout a number of recent posts from popular Overwatch content creators, it turns out that when Mei’s Ice Wall is combined with the spawn door on various Control maps (such as Lijiang Tower and Ilios), a funky interaction is possible, and the outcome is truly absurd.

If the wall is placed on the spawn door just as it stars lowering at the beginning of a round, the positioning will be impacted, and a slanted wall will be placed into the world. Carefully climbing atop the wall before it breaks will subsequently tilt your character in the game and dramatically offset your perspective.

Appearing to walk sideways across the map, character models look to be laying nearly flat on the ground while remaining fully functional. “I’m in the floor,” a member of Stylosa’s team yelled in disbelief.

“It’s a two-parter, bro,” a teammate of streamer ‘TimTheTatman” explained while repeating the bug for the popular broadcaster. Jumping from the spawn room on Lijiang Tower to the Ice Wall in front of him, Tim’s Reinhardt was soon impacted by the hilarious glitch.

“What did you just do to me?” He questioned while raising his shield at an unbelievable angle and practically walking on thin air in the process.

Impacting him at the high rank of Master, Tim still managed to find a kill and stay alive despite the bug bringing him down – quite literally.

A new development has progressed the bug even further and exemplified how Mei can even enable characters to fly around the map with ease once the bug has been pulled off.

As Reddit user ‘ChuunibyouImouto’ showcased, a well-timed Mei wall can give any hero in the game a pair of wings, even Reinhardt. Meaning that heroes can sail through the sky and unexpectedly drop on their opponents at any given moment.

While this obscene exploit remains in Overwatch, it seems as though Pharah won’t be the only character taking up space above the map. This could lead to all sorts of wild compositions where teams send tanks and supports sky-high in order to gain the upper hand in more ways than one.

BEWARE! New Exploit using Mei allows ANY CHARACTER IN THE GAME to fly around like Pharah, douches are already using it in games from Overwatch

Fortunately, the hilarious visual bug comes to an end upon dying, and obviously with the spawn doors down once and for all, there’s no way for the effect to be replicated until the next round.

Undeniably one of the most amusing bugs in recent Overwatch history, expect countless Mei players to be placing walls on the spawn door until Blizzard issues a patch that remedies the crazy effects.