Best Legends of Runeterra tips and tricks so far

With Legends of Runeterra‘s second preview patch live, and the introduction of Expeditions mode, here’s a list of tips and tricks to make sure you dominate the competition.

Legends of Runeterra’s first preview patch came with a massive amount of hype, satiating the hunger of both League of Legends players and card game enthusiasts. While Riot’s digital card game shares a few passing similarities to that of Hearthstone and Artifact, its champion and spell-focused gameplay helps distinguish it from the crowd.

With six major regions to choose from and 24 champion cards to utilize, there are plenty of unique strategies for players to master and experiment with. This number will also likely increase as Riot implements current champions from its ever-growing roster, creating even more ways for you to dominate your opponents.

Of course, the path to victory in Legends of Runeterra can be a tricky one, especially if you’ve never played a collectable card game before. Fortunately, we’ve put together a handy tips guide that will help you secure more victories when Runeterra returns to our screens on November 14. 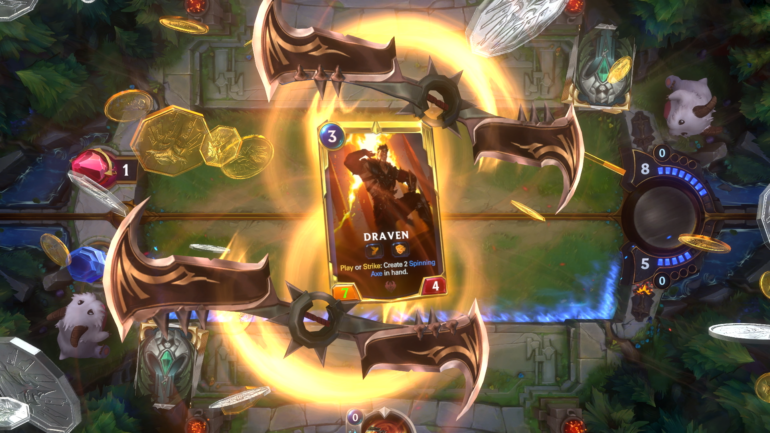 Legends of Runeterra is home to six major regions: Demacia, Noxus, Freljord, Piltover & Zaun, Ionia, and the Shadow Isles. Each region has its own champions that players can pick and choose to build their deck around, giving plenty of unique strategies and playstyles for you to use on the battlefield.

Before you go building a deck, it’s important to experiment with different champ combos and synergies, especially if you’re looking to build a strong deck with a robust win condition. For example, both the Freljord’s Anivia and Tryndamere have a revive mechanic that makes them incredibly difficult to deal with, especially when you’re bombarding your opponent with various board wipe cards and AoE effects that damage multiple units.

Cards like the Ruination and She Who Wanders may destroy every card on the board, but they both work wonders with Anivia and Tryndamere’s revival mechanic. Once the battlefield is left baron, simply storm in with these champs to deliver devastating hits to the enemy Nexus.

Just like every card game, Legends of Runeterra has certain cards and decks that stand out due to their overall power and ease of accessibility, but with a little knowledge, you can even counter the hardiest of foes.

Each deck is comprised of 40 cards, and six of those are dedicated to two champions. You can either focus on one playstyle that is tailored around a single champion or choose to pair up with another to cover up any weaknesses, so give each region a go and see which champions work well together – after all, by experimenting with each region’s champions and unique card combos, you’ll be ready to counter and exploit popular strategies. 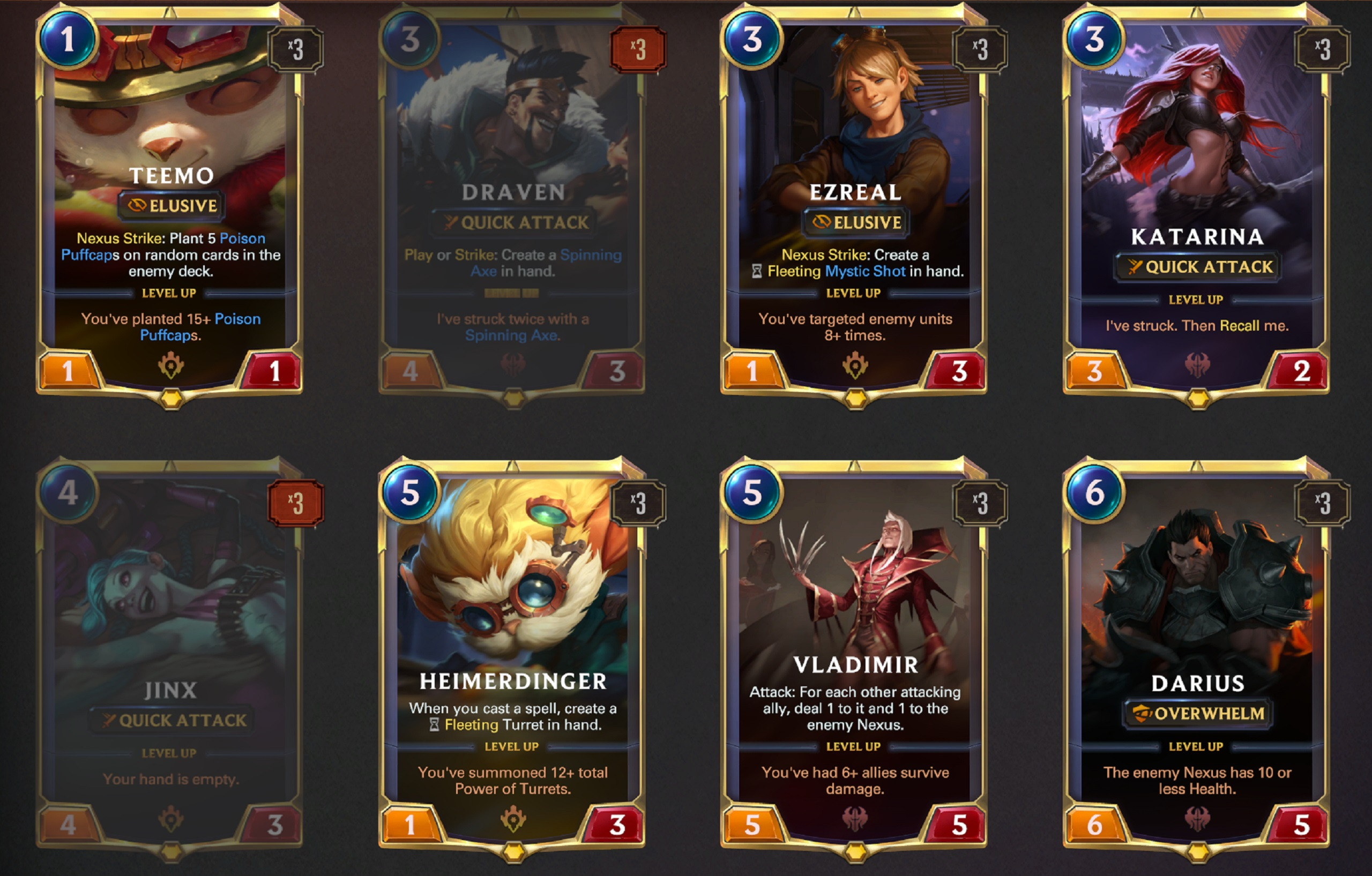 While you can win games in Legends of Runeterra without ever placing a champion card down, you’ll almost always increase your overall win rate if you focus on levelling them up.

Every champion card has unique level-up requirements, and certain objectives are easier to meet than others. For example, Demacia’s Fiora requires players to kill two enemies before she levels up. Fortunately, her Challenger ability allows her to force a chosen foeto fight her, giving the Grand Duelist plenty of opportunities to kill any squishy enemies.

Once you’ve successfully taken down two units, Fiora will receive a +1 to both her attack and health, as well as gaining access to a unique win condition. If Fiora manages to kill four enemies and survives, she’ll instantly win the game. This ability is absolutely huge and can turn what would have been a loss into a resounding victory. 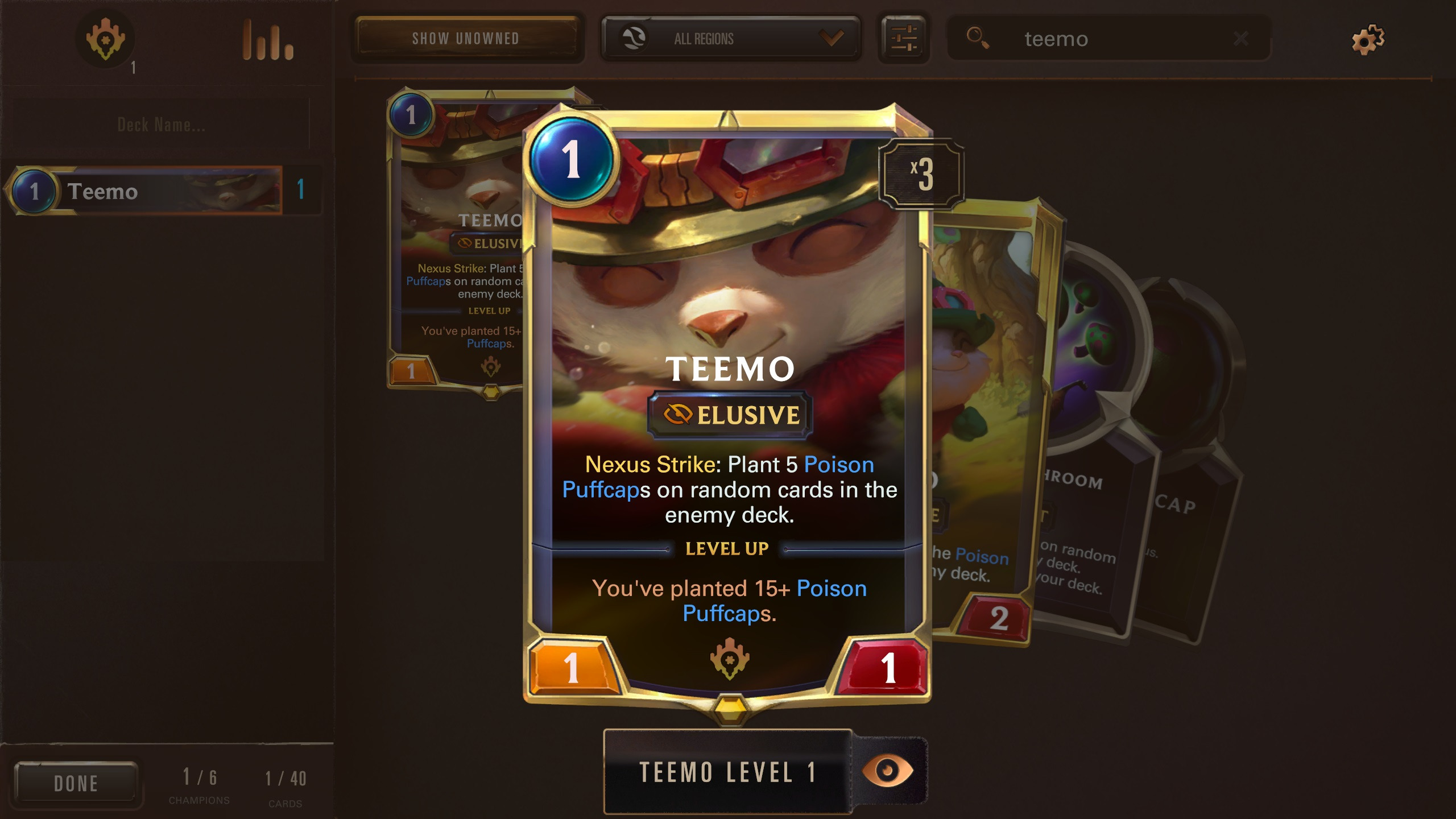 Meanwhile, champions like Teemo become even more nightmarish as he doubles the amount of Poison Puffcaps placed in the enemy’s deck whenever he strikes the Nexus. Levelling up the little devil is also incredibly easy as it relies on you filling your opponent’s hand with 15 Poison Puffcaps, so cards like Puffcap Peddler and Mushroom Cloud make this effortless to achieve.

It can be tempting to throw down your champion cards when your enemy is attempting to hit your Nexus, but it’s almost always better to keep them away from the battlefield during the early stages of the game. Instead, look for favorable opportunities where you can achieve your level-up requirements before using their amped up abilities to your advantage.

Legends of Runeterra’s gameplay is largely focused around League of Legends’ iconic champion pool, so make sure you understand how levelling up impacts each champion and what it means for your overall win condition.

Save your mana to launch deadly spell attacks 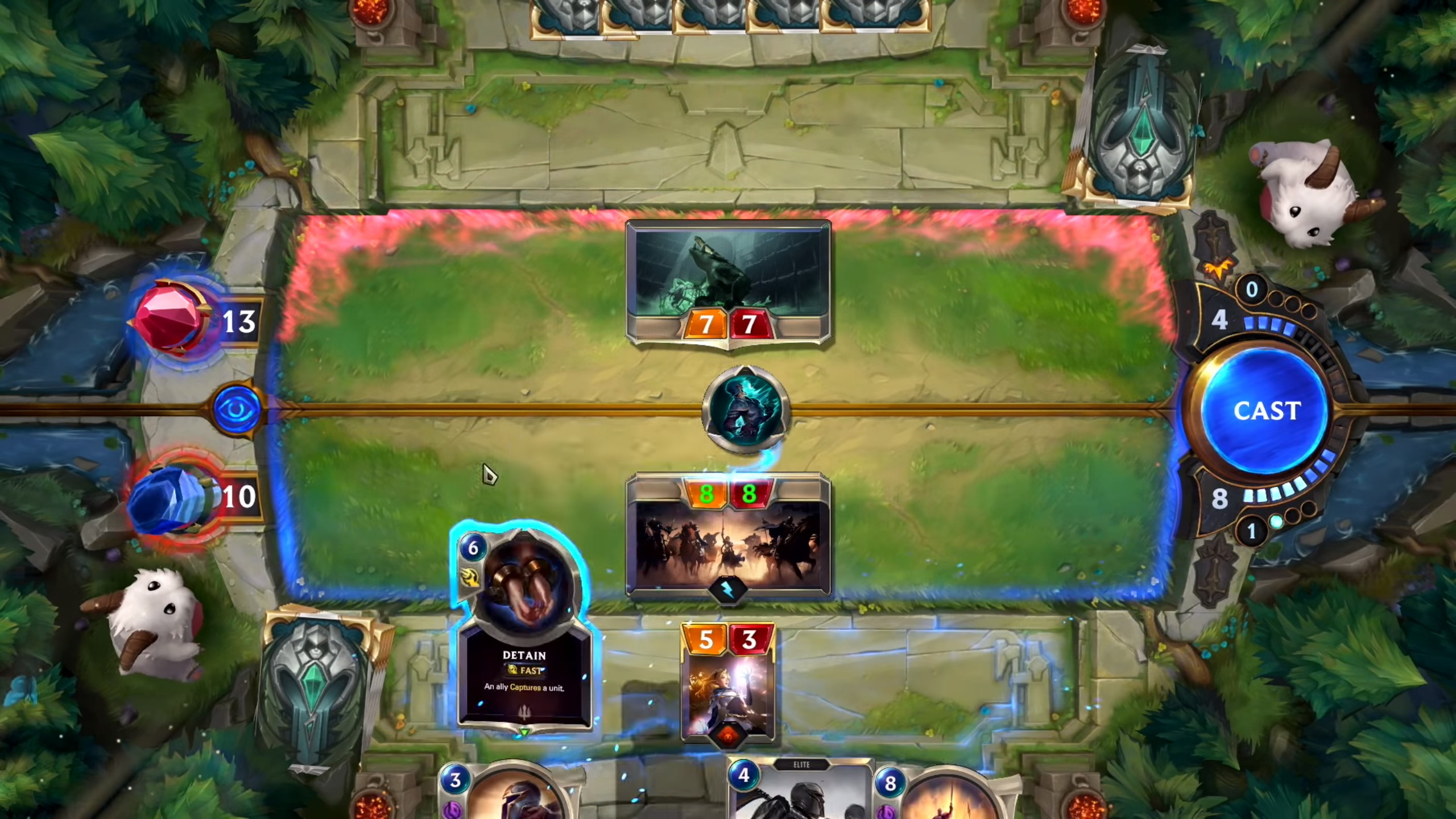 It can be tempting to spend all your mana on filling out your hand with low-cost cards in the early-game, especially if you’re looking to sneak in a few quick Nexus hits. However, every card costs varying amounts of mana to play and you’ll receive more mana as each round goes on.

Unlike most card games, Legends of Runeterra allows you to store unspent mana at the end of your turn. This is particularly handy if you didn’t have any cards in your hand to play or simply wish to conceal your game-winning strategy for later rounds.

A total of three mana can be stored at a time and will only be consumed once you cast any spells. Some of the most powerful attacks can be inflicted from spell cards, so if your opponent happens to have a particularly tanky unit or is using hordes of low-level cards to swarm the board, then be ready to wipe them out with deadly bursts of magic.

Spells can be used in numerous ways and present unique opportunities for you to swing a fight in your favor. Cards like Radiant Strike buff a unit’s strength and health, giving them the advantage they need to win a particularly tough fight, while Vengeance can outright kill a unit no matter its level. Fortunately, spells can also be intercepted with reactionary cards like Deny that stop a fast spell, slow spell, or skill dead in its tracks.

There can be a lot of different actions going on at once when casting spells, so make sure you use Oracle’s Eye – a mechanic that allows players to view how a sequence of events will play out before pulling the trigger – to see the predicted outcome of a given play before committing to it. 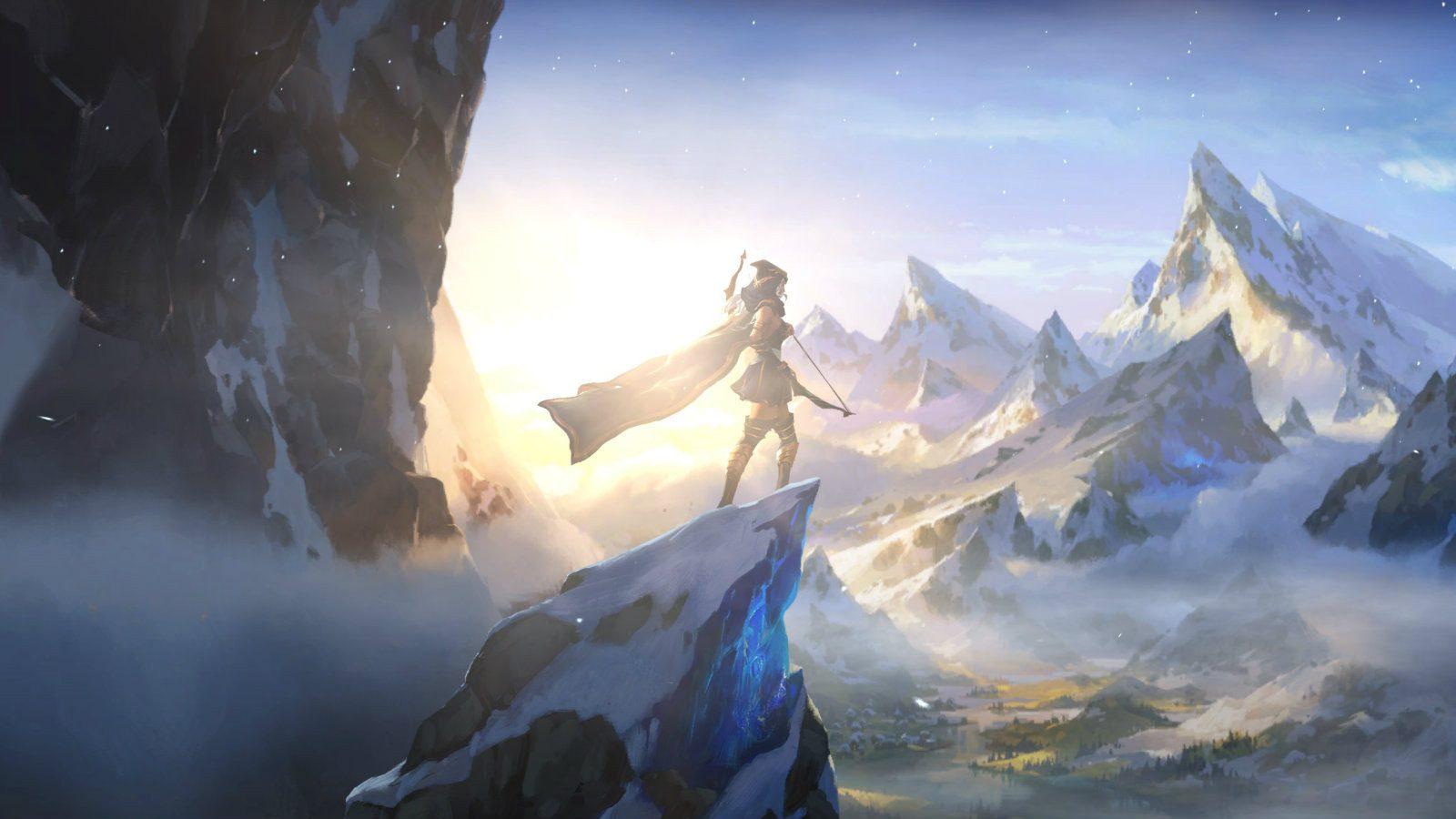 Just like League of Legends, Runeterra is all about making plays and setting up a chain of deadly combos that win you the game.

As a result, it can often be beneficial to try to deceive your opponent into using their very best cards before swiftly countering them with well-timed spell cards or following up with your own units to outdamage them. Being able to read your opponent’s moves comes with experience and the more research you do, the better you’ll get at baiting players into unfavourable situations.

Control decks are especially good at forcing players into revealing their best cards and can quickly stop a game-winning strategy dead in its tracks. In fact, the sheer amount of removal makes it rather difficult to deal with, unless you have your own spells to counter the damage. The majority of meta decks rely heavily on just one win condition and can be punished very easily if you know what to look for.

For example, the barrier-focussed Fiora deck may be very powerful, but if you can delete the Grand Duelist before she can level up, you’ll be able to instantly remove this deck’s main win condition. Once you have forced them into either playing their Fiora card or simply melted it with damage-based removal cards, it’s time to simply lay down the punishment.

Most competitive card games have a clear meta that evolves with each new patch, but sometimes it’s best to build a deck around countering the most powerful cards. If you happen to see the same deck being played over and over again, then chances are it’s either powerful or utilizes cards that have decent combo potential.

Instead of joining the rest of the meta crowd, it’s often beneficial to formulate a deck that can counter and upset the flow of the most popular strategies. Not only will you greatly increase your win rate, you’ll also avoid any frustrating losses.