When is Trials Rising coming out? Release date, gameplay, trailer and more

The arcade 2.5D multiplayer racer game is being developed by both RedLynx and Ubisoft Kiev. Here is the Trials Fusion announcement trailer.

Trials Rising is scheduled for release on February 26. The announcement was first made in June 2018.

Unlike its predecessor, Trials Rising will be available on PC, PS4, Xbox One and the Nintendo Switch.

Ubisoft have announced a Trials Rising open beta will be available from February 21. It will run through until February 25, just one day before the full release.

The open beta will be available on PC, PS4, Xbox and Nintendo Switch.

For those who are new to Trials, the basic premise of the gameplay is to ride a motorcycle from one end of the map to the other, while navigating various obstacles.

It has been confirmed various parts of the real world will feature in Trials Rising. Famous landmarks and places such as the Eiffel Tower and Mount Everest are among those that appear.

Of course, when any new game is on the horizon, gamers want to see gameplay. With a game like Trials, where the concept of the game is engrained, it is the subtle differences that often make the biggest difference. Here is some gameplay from the PS4 Pro in glorious 4K!

The standard, and core element of Trials, the single player campaign is of course present again. Comparing times with friends and other players around the world has become an interesting form of competition.

Additionally, multiplayer (both online and offline) makes another appearance alongside the ability to create custom courses. Once again these courses can be shared with other players. Customisation for a player’s motorcyclist is also as prevalent as ever.

Trials Rising introduces brand new modes also. The new Tandem Mode allows two players to control a bike simultaneously. The balance and power of the bike will be shared between both players. How the mode feels exactly will remain a slight mystery until it is tried! Given the nature of the mode it is intended to be a fun offline pastime as opposed to competitive. 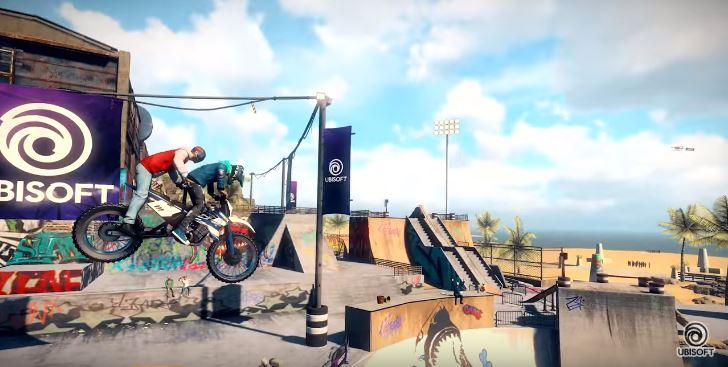 Trials rising is releasing in two different versions: the standard and gold edition. The standard edition is only available on PC and as a digital download. This means all console versions of the game will be the gold edition.

Essentially the gold edition includes the expansion pass. This grants you access to additional motorbikes, tracks and further content. Furthermore, in most cases the gold edition also comes with 16-page sticker art-book.