Magic: The Gathering Wizards of the Coast

The MTG Hall of Famer spoke to Becca Scott following his qualification to the event’s final eight bracket, and spoke out about the ongoing struggles in his home country. He also covered his eye while walking on-stage to replicate a key symbol of the resistance. 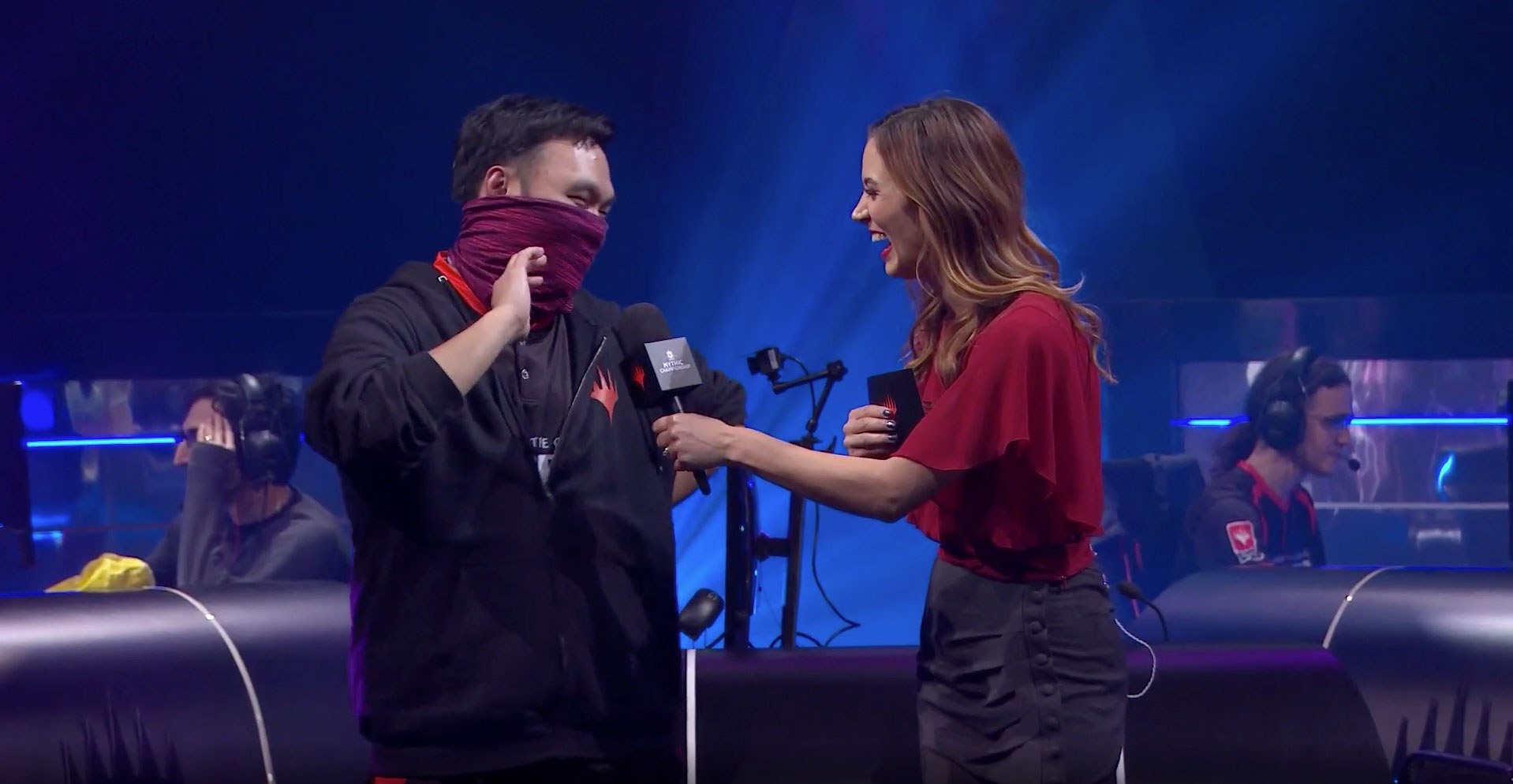 After scoring an unlikely win with his hyper-aggro red deck against the most powerful green-and-blue strategy currently in the meta built around the Field of the Dead — which is expected to land on the ban list chopping block this week — a masked Tian took to the stage.

In his emotion-fuelled interview, the MTGA star said that his achievements on the Championship stage had felt even better because he knew “life has been very tough in my hometown in Hong Kong,” and added that “it feels so good to play as a free man!”

Many assumed Tian’s public protest could lead to a competitive ban similar to Blitzchung’s lock-out, or like the six-month punishment delivered to American University’s collegiate team for holding up a “Boycott Blizz” sign, but Wizards has confirmed it will take no action.

As well as confirmation that Tian would not face any penalties, a moderator of the tournament’s Twitch chat also revealed that WotC had issued instructions to “allow and not touch any and all of those kinds of mentions of HK.”

Some inside baseball re chat: mods actually had instructions to *allow and not touch* any and all of those kinds of mentions of HK.

Following Tian’s defeat in the final eight at the hands of Gabriel Nassif, the Hong Kong star took to social media to thank Wizards and his fans for their support of his “freedom of speech.”

“I saw the Twitch chat, and I heard it. It has been a tough period for me, but it also motivated me to shine brighter,” the MTGA pro said, before adding that Wizard’s stance on the Hong Kong protests should be supported by players and fans.

“I am thankful no one stop (sic) me wearing the mask for HK this weekend. I am sure WotC will receive pressure like the NBA. If you wanna protect me, reward them. Buy their products. Play MTG Arena, especially Hearthstone players.”

About if I worry about getting punished

If you wanna protect me, reward them
Buy their products
Play mtgarena, esp HS players#BoycottBlizzard#FreeGaming#FreeHongKong

With Blizzard still caught at the center of the controversy, all eyes are now turning to the upcoming BlizzCon event on November 1, where players and fans may hold protests and boycotts against the game development company.