Two new Limited Time Modes called “Tactics Showdown” and “Ground Game” have been found in the game files for Fortnite Battle Royale following the release of the V4.4 Content Update.

Limited Time Modes are one of the best ideas that Epic Games has ever had for Fortnite Battle Royale. Usually lasting around a week, they give players something different from the standard game to play and have a different theme each time.

Following the release of the V4.4 Content Update on June 19th, Reddit user nehpets1999 discovered some new files that appear to be related to a new Limited Time Mode called “Tactics Showdown”. The description for this mode is as follows:

“This mode encourages tactical combat and building by putting a sap on the amount of resources and ammunition players can carry. Player-built structures also start off with less health than normal, and when players are eliminated they will drop fewer resources than normal.”

Also shown in the files is a Limited Time Mode called “Ground Game” which has the following description:

“In Ground Game, the focus is on fighting smart – Spray & Pray and Build Spamming isn’t an option here. Fewer building materials can be carried and max ammo count is limited, so use the natural cover that the map provides and make every shot count!”

The image shared by nehpets1999 can be found below. 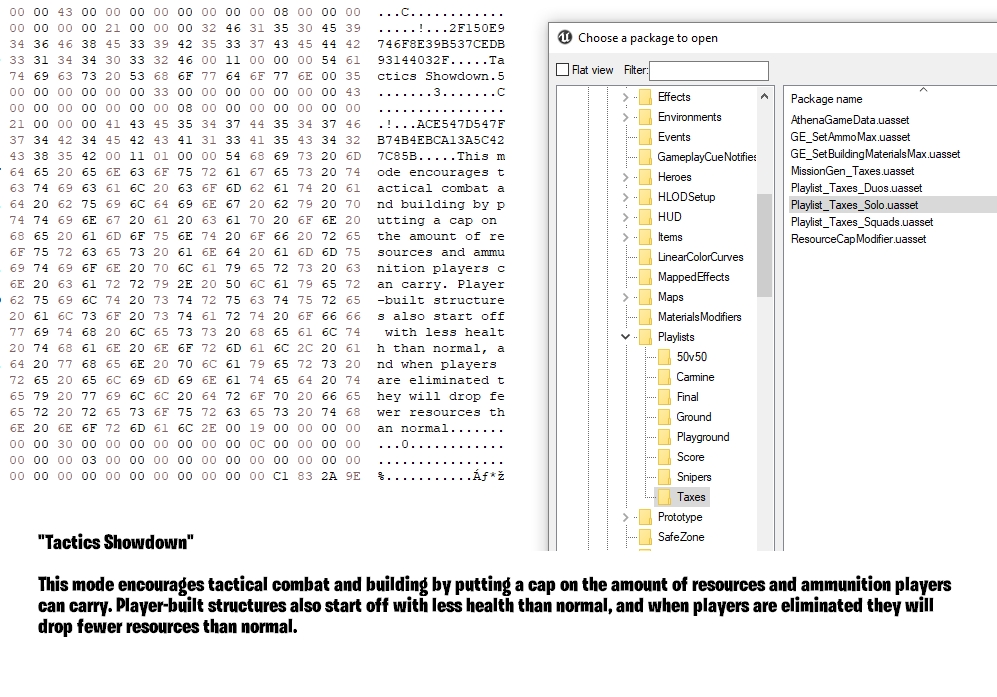 If the files are anything to go by, it would seem that Epic Games is trying to put more of a focus on strategic play by reducing ammunition, health. And building materials to a point where risk taking will be punished more severely.

However, the community has rarely responded well to a lack of building materials, as building is such an integral part of the game, so these new modes are likely to be rather divisive.

As always when it comes to leaks, none of the information has been confirmed by Epic Games and the information in the game files could be altered, or changed completely, by the time they go live.