New details about Fortnite Season 8 may have been leaked, including the new additions to the battle pass and changes to the battle royale island map.

Fans have been waiting for the start of Season 8 when it became clear that Season 7 was drawing to a close.

Epic Games revealed that Season 7 will come to an end on February 28 and players have been searching for any little detail that may reveal what the developer has in store for them during the highly-anticipated Season 8. Now, they may have a few more answers.

According to GamingIntel, the description for Season 8 has apparently been leaked – revealing details about map changes, new additions to the Battle Pass, changes to Fortnite Creative and Save the World.

It should be noted that there is no way to confirm if the leak, pictured below, is real. It could be a falsified image, but we will know soon enough, as the release of Season 8 is just under two weeks away. 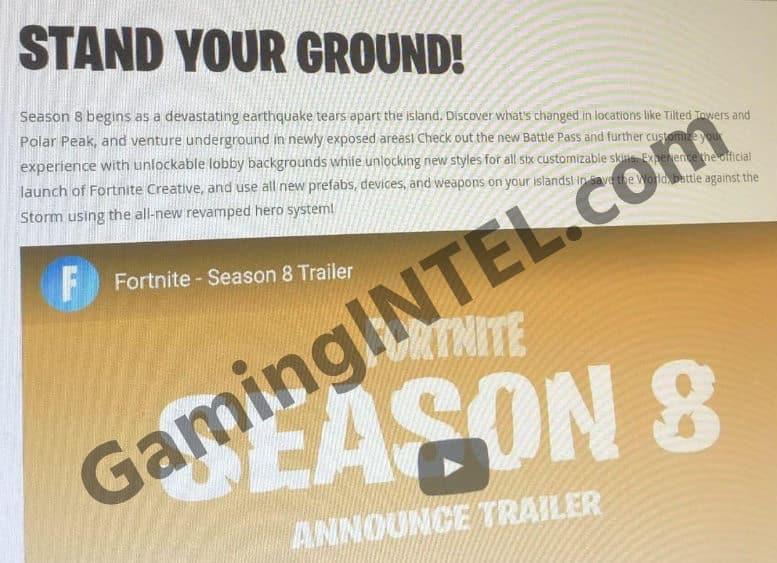 The apparent leak from the Epic Games website.
[ad name=”article3″]

“Check out the new Battle Pass and further customize your experience with unlockable lobby backgrounds while unlocking new styles for all six customizable skins.”

It adds: “Experience the official launch of Fortnite Creative, and use all new prefabs, devices, and weapons on your islands. In Save the World, battle against the storm using the all-new revamped hero system!”

Despite this, there is no way to confirm the legitimacy of the leak, so it’s best to take a wait-and-see approach to things.

Thankfully, fans don’t have to wait long to find out what Epic has in store for them for Fortnite Season 8.