Tyler ‘Ninja’ Blevins is well known for breaking records on Twitch, but the American has also set an incredible record on the game he has become famous playing, Fortnite Battle Royale.

The streamer rose to prominence on Twitch thanks to Fortnite, with the game propelling Blevins to the very top of Twitch, and even into traditional media like his appearance on The Tonight Show starring Jimmy Fallon.

While Ninja is notorious for his entertaining broadcasts which are always full of hilarious moments, it’s his skills on the popular battle royale title that got people talking on Thursday, December 27.

Fans who watch his YouTube channel know that Ninja wins a lot of matches, but what you might not realize is that Ninja has become the first player to win 5000 Fortnite matches on PC.

This is an incredible feat on its own, but it’s made even more impressive by the fact that Blevins has played 13,500 games of Fortnite, leaving the streamer with a win percentage of 37%, averaging one win every 3 games.

Alongside this, the American also holds the record for most total kills across all platforms at 94.000, with his kill to death ration sitting at 11, meaning Ninja eliminates 11 enemies per game on average. 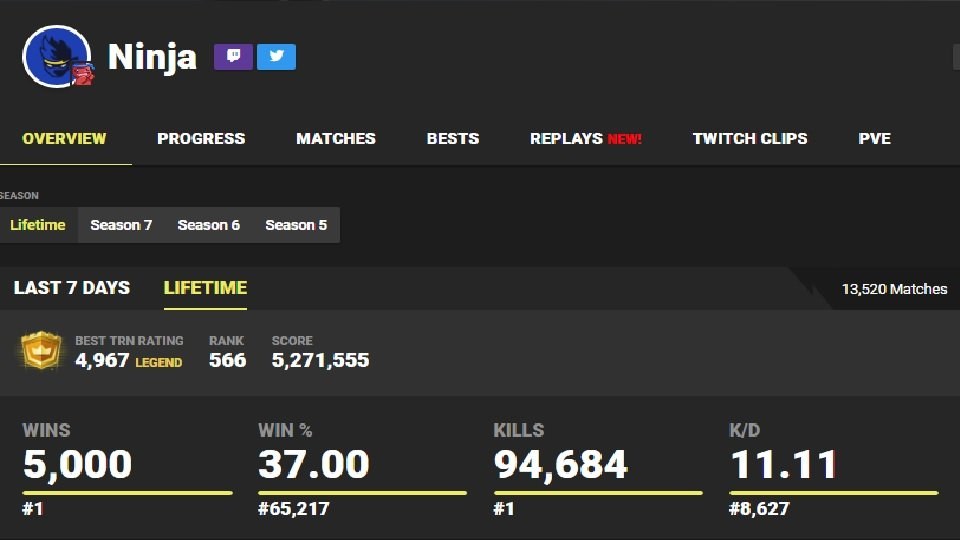 While Ninja may be the most popular streamer on Twitch, he isn’t without his detractors. Blevins appeared on an episode of WIRED’s Autocomplete Interview series on December 26, which quickly became the most disliked edition of the series yet, something which fellow Fortnite streamer Brett ‘Dakotaz’ Hoffman called “ridiculous.”

However, fans of the American have an exciting event to look forward to, as Ninja is hosting his very own New Years Eve party streaming live from Times Square in New York City.