The Port-a-Fort was one of the more controversial additions to Fortnite when it was introduced earlier in 2018, but now Epic Games have taken it a step further, with a new Port-a-Fortress.

Building is the most unique component of Fortnite, separating it from other games in the battle royale genre, and is absolutely key to being a good player.

So, when the Port-a-Fort was first added, some players feared that Epic was pandering to less skilled players, giving them a cheap way to suddenly build without actually having to do it.

After a while however, these fears calmed, as the Port-a-Fort, while useful, was fairly rare to find, and it certainly didn’t take away from the raw skill and practice needed to be a good builder.

Now, Epic are taking the Port-a-Fort concept a step further, with a Port-a-Fortress coming soon – allowing you to instantly have a huge, castle-like, build in seconds. 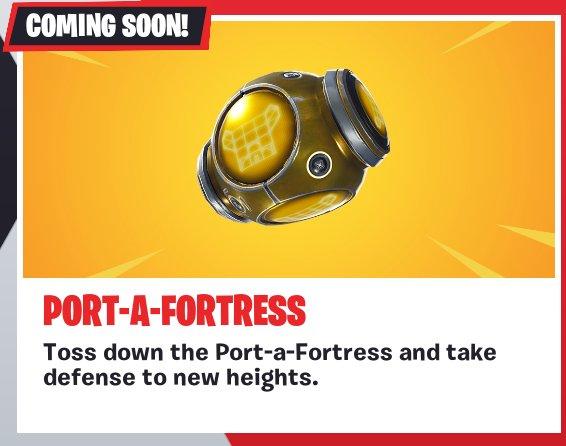 Other than the description given in the news section of the game, there isn’t any other details to what exactly the item will do, although it is fairly self-explanatory.

The image shown within the item appears to be a build three wall lengths wide, as opposed to the Port-a-Fort, which is only a single wall length wide, with a large open section at the top.

The new item can be expected with the next content update, which will likely come sometime next week, so we will know soon enough just how powerful this new Port-a-Fortress is.