Fortnite Season 3
Epic Games has finally released Fortnite’s long-awaited Chapter 2, Season 3 on June 17, and with it comes a brand new set of weekly set of challenges for players to complete.

After multiple delays were announced for Season 3, which was initially scheduled to be released on April 30, fans of the battle royale have been eager to drop in following the latest update.

The mysterious Device finally sprung into action on June 17, bringing many new changes to the Fortnite in Season 3, such as flooding the island and adding some more challenges for players to sink their teeth into.

There were many new changes made to Fortnite’s map in Season 3.

There are only seven weekly tasks available in Week 1, compared to the ten-a-week challenge sets that Epic has implemented in past seasons.

Many of Fortnite’s week 1 challenges are fairly straightforward, such as the opening chests and ammo boxes or finding eliminations, however, there are some that are tailored towards the latest changes.

New ‘Loot Sharks’ have been added in Season 3 that you will need to shoot in the water, you’ll need to enter the new vault at Catty Corner after getting the keycard off Kit, and you will also need to find some hidden Gnomes, which are scattered around the Homely Hills. You can find the full list of Fortnite’s Week 1 challenges below. 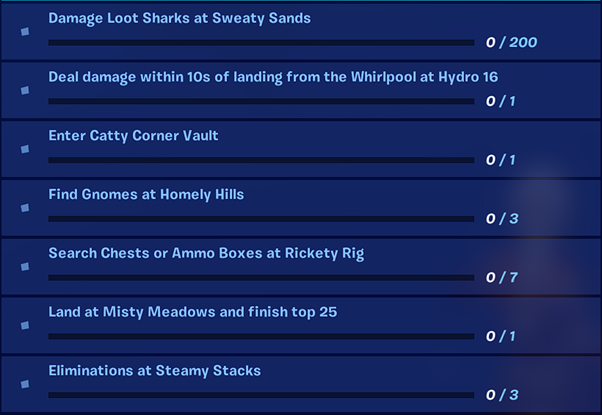 As usual, completing each of these challenges will help players progress through the season quicker, with 35,000 XP available as a reward for each one of these weekly tasks.

While Fortnite’s headquarters in The Agency has now been replaced, following its destruction in the end-of-season event, the weekly challenge board is still accessible in-game.

Fortnite fans can also work towards unlocking a brand-new Aquaman skin, which matches the theme for the flooded map in Season 3, as players will need to complete another weekly challenge to unlock the popular DC superhero.

Although the weekly challenges are typically released on a Thursday, following Epic Games’ release of the new season on Wednesday, June 17, we might see these weekly tasks releasing a day earlier throughout Season 3.