Another week means another set of challenges for Fortnite Battle Royale players around the world to complete.

The Challenges for Week 7 of Season 5 have finally gone live after a slight delay that saw them released on Friday, August 24, rather than the normal Thursday release.

As has been the case throughout Season 5, Week 7’s list includes three free-to-play challenges and four that are exclusive to Battle Pass owners.

Three of this week’s challenges are classed as “HARD” (three SMG eliminations, following the treasure map in Pleasant Park and eliminating three opponents in Lazy Links) which means that you will earn twice as much XP by completing them. 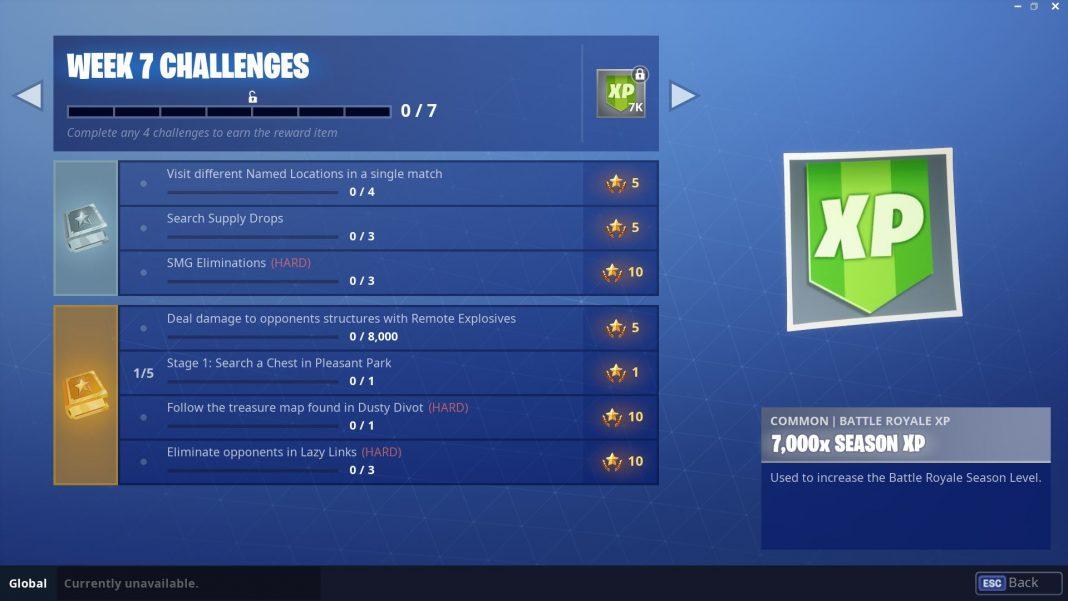 On the whole, the Week 7 challenges are considerably more simple and straight-forward than the ones that have been seen in previous weeks.

The most obvious explanation for this is that Week 7 is the final week of Fortnite’s Road Trip. Completing all seven of the challenges will unlock this week’s bonus Road Trip challenge – simply find the secret Battle Pass star to unlock a free Battle Pass tier and get one step closer to unlocking the “Road Trip” skin.

In fact, if you’ve already completed the previous six Road Trip challenge’s, doing the same this week will mean that you unlock the Road Trip skin, which was leaked following the V5.30 patch on August 23.

As Season 5 begins to draw towards its conclusion, don’t miss out on the chance to earn the Road Trip skin or any of the other cosmetics associated with the Battle Pass!

The full list of Week 7, Season 5 Challenges is as follows: