Fortnite’s Cube Is Burning Strange Runes Into the Ground

The strange behavior of Fortnite’s mysterious cube continues. Now, the giant object is leaving runes, or scorched marks, on the ground as it travels across the map.

According to one well known data mining account, @FNBRLeaks on Twitter, files suggest that the cube will leave a total of six more runes on the ground before finally reaching a lake and activating/turning on. 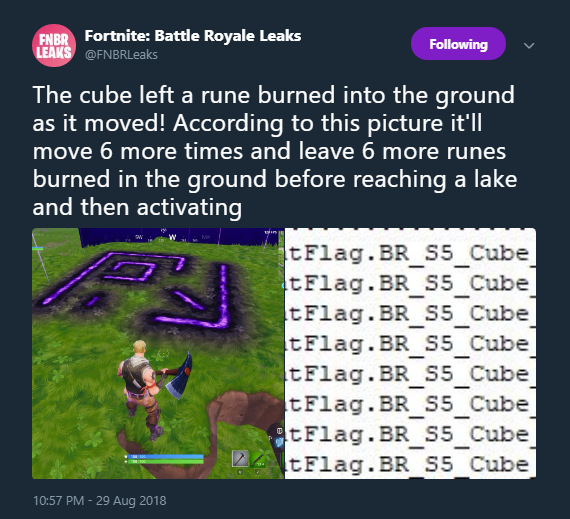 Opinions about what that lake might be are still divided. Some fans are convinced that the cube is heading to Loot Lake, and that it will spark an event that changes the location forever, while others believe that it is going to move back towards the unnamed lake in Paradise Palms that it originally spawned next to.

This latest development with the cube was originally shared by a number of players on Reddit and Twitter and the community immediately started to theorize as to what the symbols might mean.

Tilted is going to be destroyed. Thanks to the guy who tried to combine runes, we solved it everybody.. from r/FortNiteBR

One conspiracy theory that has gained some traction on Reddit suggests that all of the runes discovered in Fortnite so far actually make a map of Tilted Towers. We would advise skepticism in this case, though, as players have been predicting the destruction of Tilted for multiple seasons now.