The popular Peely skin in Fortnite Battle Royale has been given a robotic makeover, and the new P-1000 has finally been unveiled to the public.

Since it’s introduction back in September 2017, Fortnite has had thousands of cosmetic items come through its Item Shop and Battle Passes, with some being more popular than the others.

One of the most popular outfit skins has been Peely, which was first debuted in the Season 8 Battle Pass but then used as a character in a variety of trailers, including the ones for both the launch of both Seasons 9 and 10.

Now, with Season X slowly winding down to its end, Epic Games have thrust Peely back in the spotlight yet again, this time turning him into a robot.

Introducing P-1000 – “something “dangerous, something powerful, something… banana scented,” created by Jonesy “deep within enemy territory.”

Deep within enemy territory, Jonesy has been working on something dangerous, something powerful, something…banana scented. Enter the P-1000.

The skin is robotic and predominantly yellow, and it includes a blended version of Peely as its brains, if you can call it that.

Those who watch the Season 9 launch trailer will remember the iconic banana character being blended by Jonesy for food, after the two were locked in a dark enclosure for a long period of time.

The skin comes as part of the P-1000 Challenge Pack, which is now available in the Fortnite Store, and it can be purchased for $14.99 The pack also includes a built-in emote called Peely Pulse, as well as a set of challenges. 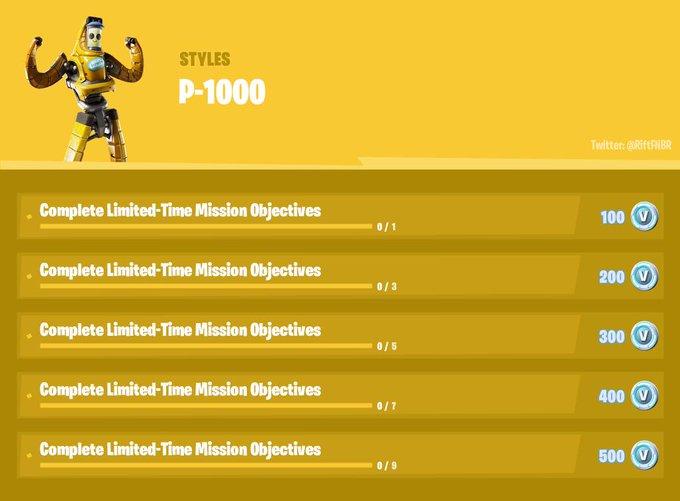 However, instead of the challenges unlocking a cosmetic reward, which is usually the case, this specific set of objectives actually unlocks a total of 1,500 V-Bucks.

That’s actually close to the value of what the entire pack would cost in V-Bucks, which makes this a very sensible purchase for those who are confident that they can complete the challenges.

The only question that remains is for how long will this P-1000 Challenge Pack be available for sale, and that’s information that Epic Games hardly ever announce.

However, these kinds of packs in the past have remained in the shop for about two weeks, so those interested in purchasing should probably do so before it’s too late.