Players are discovering more and more uses for the new Sneaky Snowman item in Fortnite Battle Royale, and Team SoloMid’s ‘Myth’ has found what could be the best one so far.

During a match he played live on stream, Myth found himself in a situation where an X-4 Stormwing plane was flying straight at him with only one thing on the pilot’s mind.

Using good timing, the pro player built up to be more level with the plane and threw a Sneaky Snowman at it just as the plane flew by him.

The Snowman cocooned the pilot and knocked him off of the plane and onto the ground, where he stood still and was the perfect sitting duck for Myth to quickly wipe out.

The strategy appeared to have worked better than he had expected as he cheered in excitement and tweeted the video out with the caption “Sneaky Snowman = counter to planes.”

The clever usage of the Sneaky Snowman caught the eye of Epic Games Community Coordinator Sean ‘MrPopoTFS’ Hamilton, who commented his approval of it on Twitter.

It appears that this trick is not the result of some bug or glitch but rather could possibly even be a hidden use for the Snowman that Epic did not explicitly state. 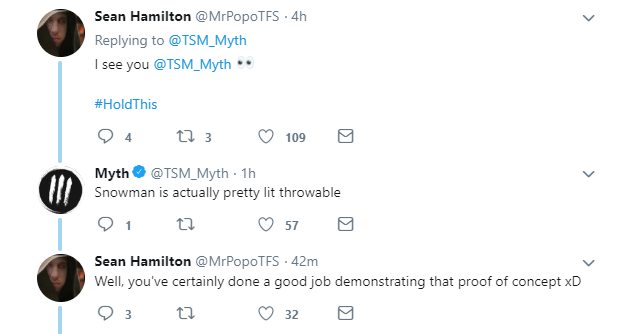 While many were initially put off by the prospect of another disguise item being added to the game, the Sneaky Snowman has been proven to be a whole lot more useful than the Bush.

This is the second hidden use for the Sneaky Snowman that players have discovered in the short while it’s been in the game. On day of its release, a video was posted on Reddit that showed how the new item could be used to prevent fall damage from any heights.