Fortnite challenges for Week 3 of Season 6 have been leaked

The third weekly challenges for Season 6 of Fortnite Battle Royale have leaked online, and shows Epic Games has come up with some very inventive new tasks.

After last week’s challenges, which fans pointed out were a little mundane, simply directing you to do damage or eliminate players in different ways, Epic have switched it up this week.

For week 3, there are a number of new challenges, including ringing doorbells of houses with enemies inside, which will make for some interesting situations.

As with Season 5, the weekly challenges are split into free and battle pass, meaning you will need to own the battle pass in order to get access to four of the seven tasks.

It should be noted that these challenges could be changed or tweaked before they go live on Thursday, October 11, but this is best indication we have of what to expect. 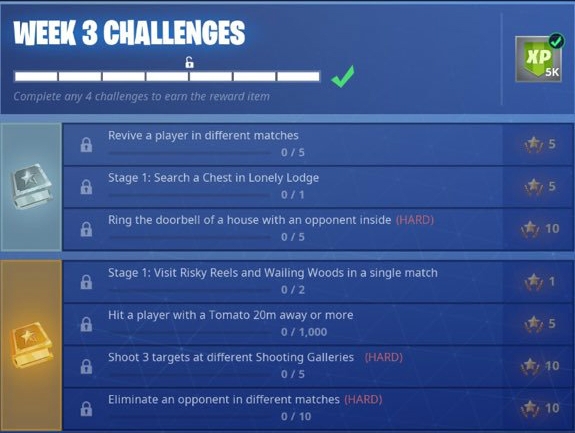 For the challenges with stages, we will have to wait until they go live to see what the second and third stages are (there is typically three stages total).