Fnatic Fortnite player and content creator ‘POW3R’ has figured out an easy way to avoid fall damage in Fortnite.

Playing Fortnite live on stream, POW3R found himself in a situation which ended up with him falling a great distance, more than enough to get eliminated from the resulting fall damage.

However, the former Call of Duty and Overwatch pro player pulled a move that not only allowed him to survive, but also to not take a single point of damage from his fall.

Admittedly, POW3R’s method does require the use of a Bounce Pad, but if a player has at least one in his inventory, then he can almost guarantee survival when falling from high surfaces.

However, the move does require fast execution in button pressing and good timing, since the Bounce Pad cannot be placed on the ground unless there is a user-created floor beneath it.

Therefore it is necessary for a falling player to build a floor immediately upon getting close enough to do so in order to have the necessary split-second to still be able to place the pad.

Almost lost in the impressiveness of the whole sequence was the reaction of the person sitting next to POW3R when it all happened.

Right when he saves himself from elimination, the person beside him donned a look of pure astonishment on his face, which was rather a hilarious moment. 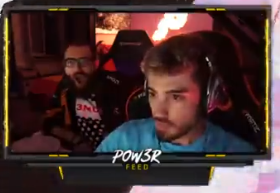