FaZe Clan pro Fortnite player Brendan ‘Jaomock’ O’Brien has had a go at NRG Esports after they parted ways with four members of their pro Fortnite team.

NRG announced on September 7 that they have released competitive Fortnite players ‘Lamar,’ ‘TheGeneral,’ ‘Vicaros,’ and ‘Kaysid’ as part of their “effort to shift [their] Fortnite approach.”

After the roster changes, the only players who are still on the team are ‘Zayt’ and ‘Svenosss,’ both of whom serve as Solo competitors. 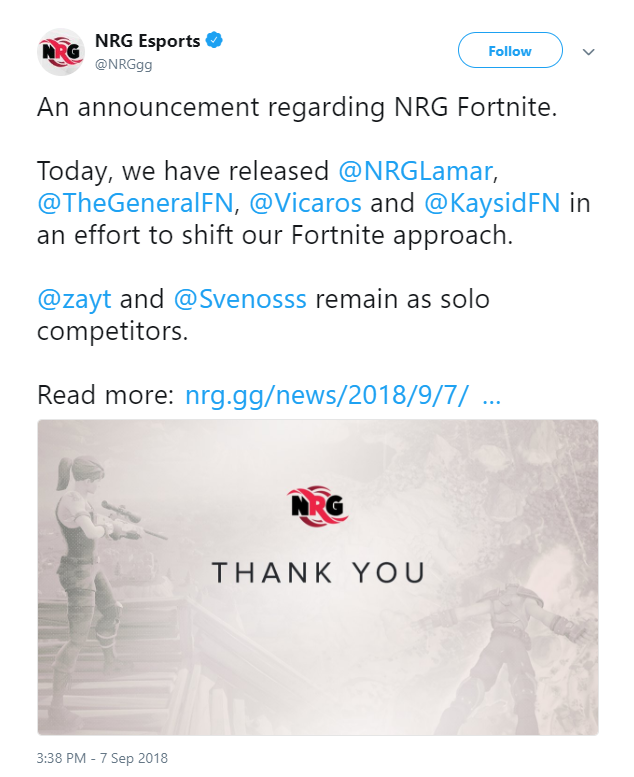 TheGeneral, Kaysid, and Vicaros had all been signed by NRG on June 7 in anticipation of Epic Games’ $8 million Summer Skirmish competition series.

Both Kaysid and TheGeneral participated in at least one of the series’ tournaments, and helped earn over $33,000, a third of NRG’s $90,000 in total winnings from the eight weeks of Skirmish competitions.

NRG’s roster decisions have not sat well with FaZe’s Jaomock, who expressed genuine surprise at the fact that the org would release a group of players he felt were “a top 5 team.”

The FaZe pro did not stop there; he also threw some major shade at NRG, accusing them of not paying for their players to go compete at the recent $1.5 million Summer Skirmish Week 8 tournament at PAX West in Seattle, WA.

Evidently, according to Jaomock, the players had to pay their own travel expenses out of pocket.

Also shout out to NRG for making them pay out of there pockets to go to pax.

Neither NRG nor any of the released players have commented in regards to Jaomock’s claims, although the FaZe pro would likely have the insider information considering he was at the event and very well could have found this out from the NRG players that had chosen to attend.

Regardless, the four top-level competitive Fortnite players will likely not last in the free agent market for long as they are now free to sign with other organizations.