KEEMSTAR Will Bring Back Friday Fortnite But On One Condition

YouTuber and host of DramaAlert Daniel “KEEMSTAR” Keem, has announced that the ‘Friday Fortnite’ tournament could come back – but the community will need to show their support for it first.

Friday Fortnite was a weekly tournament hosted by KEEMSTAR and UMG Gaming, which attracted millions of viewers every Friday with top Fortnite streamers and YouTubers taking part.

But it was stopped short due to clashes with Epic Games’ own ‘Summer Skirmish’ series, which just finished it’s final week at PAX West.

With Summer Skirmish out of the way, fans have been asking KEEMSTAR to bring Friday Fortnite, and he seems open to the idea.

But, in typical KEEMSTAR fashion, he wants to ensure that the demand for the tournament is real, and so has set a retweet target for the community to hit.

So, if you are in favor of Friday Fortnite returning, make sure you head over to the Tweet below and hit retweet! 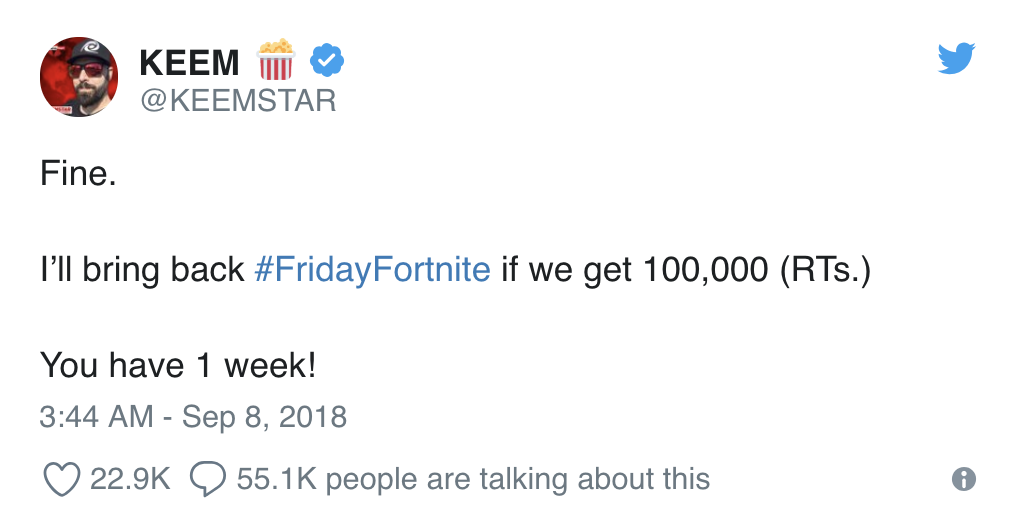 At the time of writing, the Tweet has just surpassed the half way mark, with over 50,000 retweets. With a week to go, KEEMSTAR is well on track to hitting the goal of 100,000.

Despite the huge viewing numbers that the Summer Skirmish attracted, Friday Fortnite was equally if not more popular, even with a lower prize pool and no developer support.

This largely is down to two reasons – firstly that only popular streamers were allowed to play, and secondly, the format. The duos tournament is focused entirely on eliminations, not victory royales, meaning competitors are always playing aggressively.