Anyone who has ever played Fortnite knows that every player has a specific order which they like their weapons and consumables to sit in their inventory.

Whether it’s assault rifles or shotguns first, or shields in the last spot, there’s always one player who can’t leave a building yet because they haven’t rearranged their items.

While this can be time consuming, Reddit user ‘DRS733_’ has come up with a solution that would ensure your items always end up in the exact position you want them to.

DRS733 would introduce ‘Preferred Weapons Slots’, a new tool that would allow players to designate certain sections of their inventory to specific items or classes.

Players would set their preferences in the settings menu, with all five slots able to be used as a designated spot. Players could pick a slot, and then scroll through the different weapons classes such as submachine guns or sniper rifles and select the spot they would enter when picked up.

If an item already occupies the preferred position, the item would then move to the next available spot, meaning players could carry more than one weapon from any class without having to drop the one they were using. 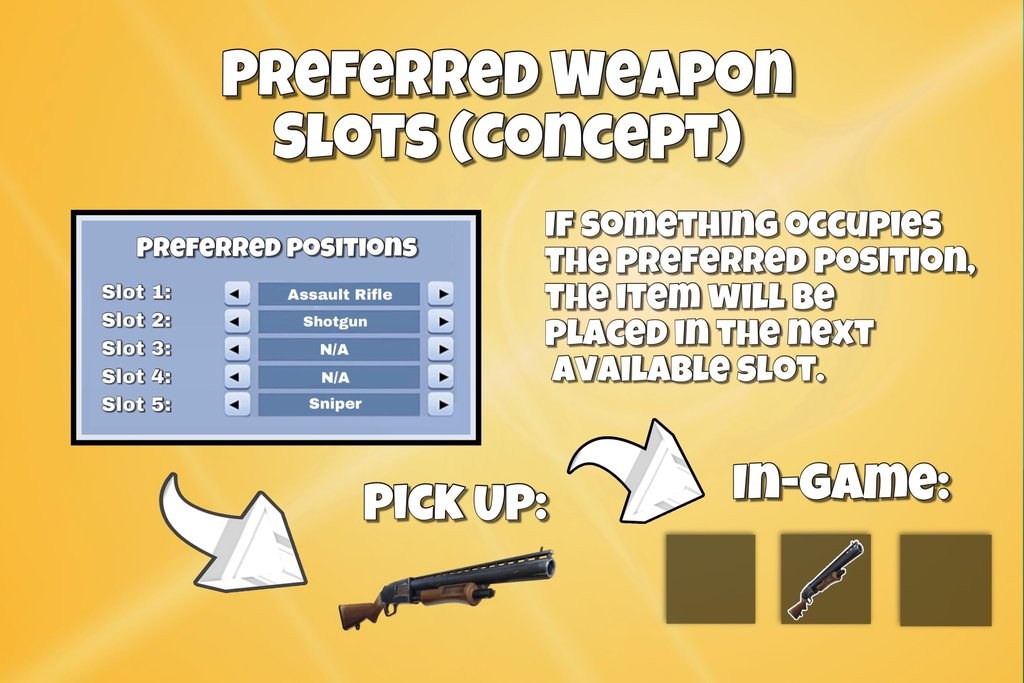 Items would have their own designated place in the inventory.

Some Fortnite fans believe this option should have been added already, while some believe that it could be improved by adding an option where items that are of a higher rarity than the one you have are automatically swapped. For example, if you find a Rare assault rifle on the ground, it would automatically replace the uncommon one currently in your inventory.

While Fortnite fans are crying out for these changes, they are only concepts at the moment, and Fortnite have yet to announce if they will ever make their way to the battle royale title.