FIFA 20 Ultimate Team’s Summer Heat promo has been on fire lately, with a ton of Squad Building Challenges (SBC) being offered to players, and the latest is a brand new Paulinho SBC special Silver Star card.

Summer Heat has quickly turned into one of the more popular promos in FUT 20, despite it coming so late in the game’s life cycle. On July 1, EA SPORTS introduced another new series of upgraded cards – Silver Stars, which are silver players whose stats are massively boosted.

The first in this series is Paulinho, a Brazilian midfielder/winger who plays for Bayer Leverkusen. With the new SBC that’s available in-game, you can unlock this Silver Star, and we’ve got everything you need to do so while it’s still around.

This might be the oddest card we’ve ever seen in Ultimate Team; despite retaining a low 74 rating, the item boasts some superb stats that would be fit for a rare gold in the high 80s.

Acceleration and Sprint Speed are both topping the charts as we would expect from the wily Brazilian veteran. 95 Dribbling along with a nice 99 balance and 93 Ball Control means you’ll be able to comfortably weave around defenders, on top of the already-impressive four-star weak foot and skill moves. 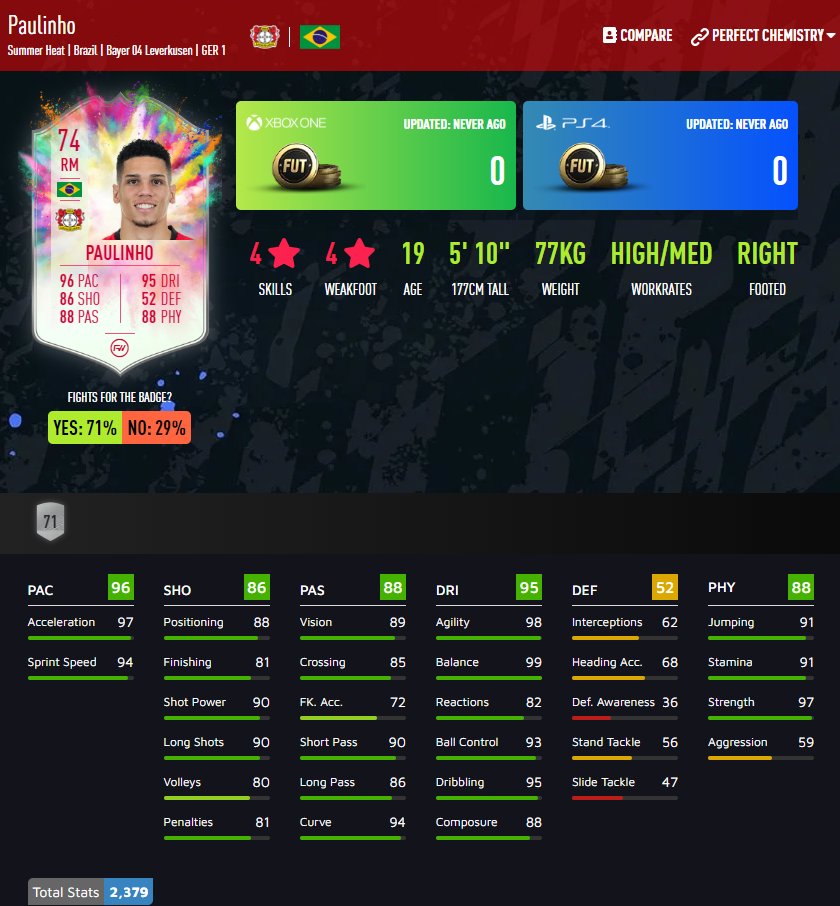 If you want to pick up this gold card cosplaying as a silver, you’ll have until July 7 to do so. The full list of requirements can be found below, and there are two teams to build – Bayer 04 Leverkusen and Bundesliga.

According to FUTBIN, this challenge overall will cost between 111,000 to 123,000 coins, depending on what platform you play on. Recommended solutions for both teams you’re going to have to assemble can be found below.

Solution for the Bundesliga squad builder.

And that’s it! Not too difficult, certainly not that pricey, and probably a worthwhile challenge for any FUT player to complete, if you’re in need of a sneaky-good silver player. Whether Paulinho finds a starting spot in your lineup, or is used to complete yet another challenge, this Summer Showdown SBC is definitely one of the most interesting to be released so far.

For more SBC guides, tips, and FIFA 20 news, make sure to follow us on Twitter @UltimateTeamUK.
Advertisement