How to complete Mkhitaryan RTTF SBC in FIFA 20: solution & cost

As part of the FIFA 20 Pre-Season promo, a new Europa League Road to the Final SBC for Roma midfielder Henrikh Mkhitaryan has been released, and we’ve got the requirements, cheapest solutions, in-game stats and everything else you need to complete it.

With the UEFA Europa League set to resume in August, the Road to the Final cards are now relevant again in Ultimate Team, and EA SPORTS are actually adding more of those live items into the game.

Days after announcing the new Pre-Season promo in FUT 20 on July 29, EA has added a new RTTF SBC for Henrikh Mkhitaryan ahead of Roma’s upcoming second leg match against Sevilla.

If Roma can come out on top of the current first leg tie between the two teams and advance to the quarterfinals, Mkhitaryan’s card will receive a substantial boost and continue to do so until La Lupa is eliminated or win the entire competition.

Before we get into requirements and solutions, let’s take a look at what exactly you’ll be getting out of Mkhitaryan when you unlock him. Pace, Shooting, Passing and Dribbling are all in the low 90s, but only 82 physical means the Armenian is better suited to rely on his quickness than being able to bully other players.

Physical aside, these stats make this high-tier card definitely worth considering. His only stats not in the green all have to do with defending, and that’s not what you’ll be using the Armenian for anyway.

But this impressive stat line won’t be coming at a massive bargain. The SBC will run you anywhere from 93,000 FUT coins on PlayStation, 95,000 on Xbox, and 104,000 on Origin PC, according to FUTBIN. That said, there is only one squad that you have to build for this challenge, and the requirements are pretty simple and easy to meet.

Here are the cheapest solutions we’ve found that don’t require loyalty or the use of position-change cards.

If you need to beef up your midfield, completing this SBC seems like an obvious choice, but if you’re still not sure about it, you have until Wednesday, August 5 to finish it before Sevilla and Roma face off on Thursday, August 6.

As always, make sure to follow us on Twitter @UltimateTeamUK for all the latest FIFA news, updates, announcements, guides, and more.

USMNT and Borussia Dortmund star Giovanni Reyna is one of the brightest prospects in world football, but he still finds time to kick back and play some FIFA 21. His Ultimate Team is stacked, too, featuring Van Dijk, Beckham, Mbappe, and more.

Given he has the hopes of a nation on his shoulders, while also representing one of the world’s biggest club sides, it understandable Giovanni Reyna would want to take some well-earned downtime to play some FIFA.

Younger players tend to be big on their FIFA, as we’ve already seen some legendary squads built by the likes of Mason Mount and Phil Foden, but Reyna’s is much more modest — at least by pro player standards.

But it’s still absolutely stacked, featuring one ICON, four special cards, plus his own 99-rated pro player card, as well as some other world-class talent that will fill opponents with dread.

Dortmund have a powerful squad in FIFA 21.

Posting on the FIFA subreddit, u/FastPolarBear revealed Reyna’s full team after playing against him in Weekend League.

It’s very attacking, as he picked a 4-3-3(4) formation with a rock-solid defensive core of Virgil van Dijk and Carles Puyol, with Alisson Becker in goal. His midfield is well-balanced, too, with Fede Valverde doing the dirty work and David Silva supplying a four-pronged attack of David Beckham, Karim Benzema, Kylian Mbappe, and Reyna himself. 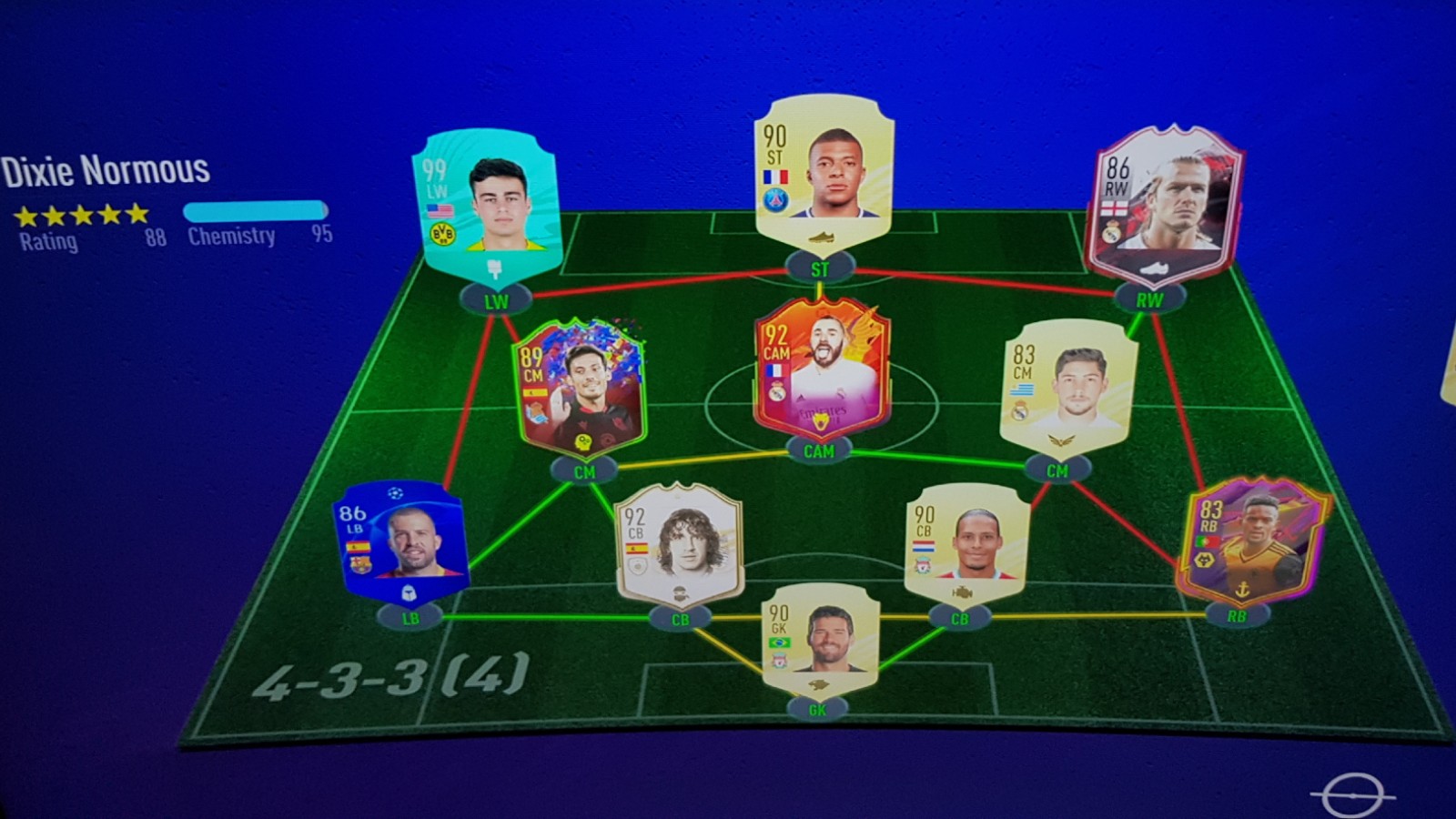 It’s clear Reyna isn’t so much concerned about chemistry as about cramming as many quality players as possible into his team. While there’s a lot of pressure on his limited number of defenders to do the dirty work, it still looks like a fun team to muck about with.

Despite the onfield quality, the most eye-catching part of Reyna’s team has to be the name in the top left. It’s not often you see players showing a sense of humor, but we’re all for it.

Reyna’s opponent revealed his pro card scored a last-minute winner in extra time in their FUT Weekend clash, which just shows the value of having access to the best cards in the game.